Xiaomi changes his brand MIJIA. The new one will be called Smart Life

Spoločnosť Xiaomi changes its brand Mijia, which grouped smart home products. The subsidiary does not change its focus, but its designation changes. After the new one, the brand is called Xiaomi Smart Life.

Chinese manufacturer Xiaomi has officially announced the change of its subsidiary. mark MIJIA changes to Xiaomi Smart Life, while the official profile on the Weibo social network has already changed its name. 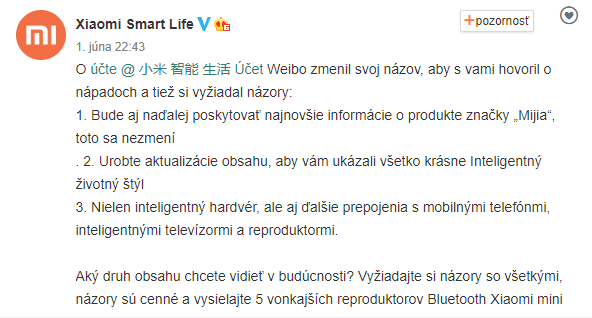 The accompanying article clarifies that this is only a change of label, which means that the brand's focus on smart home products does not change.

Mark MIJIA was established during 2016 and its main task was to group products from the smart home portfolio. Term MIJIA in Chinese, it literally means Xiaomi Smart Home, meaning smart home from Xiaomi.

The first product to be listed under the original brand MIJIA, was an intelligent rice cooker. This product has gradually come in several versions and generations and has become a truly popular part of many intelligent users, not only in China but also in the international global market around the world.

The logo has changed, the focus remains

The original message indicated that the brand logo would not change, but would be displayed in a simplified version. Currently, however, the profile on the Weibo social network has already been renamed to Xiaomi Smart Life and the logo is virtually identical to the main Xiaomi logo.

In the comments section, the Chief Operating Officer of Xiaomi also added his statement. He explained that the products will continue to use their original logo MIJIA. The same applies to new products that will only be introduced under the brand Xiaomi Smart Life.

Do you like the new label Xiaomi Smart Life or rather for maintaining the original designation MIJIA? Do you use any products within the smart home? You can write your opinions and observations in the discussion below the article.