Game Black Shark 5 with Snapdragon 888+ will be introduced soon

Chinese manufacturer Black Shark, as a subsidiary of Chinese Xiaomi, is preparing its new gaming smartphone with the name Black Shark 5. It should be officially introduced in the coming weeks and should also offer a new flagship processor in its equipment. Qualcomm Snapdragon 888+ 5G.

Black Shark 5: The next generation of gaming smartphones

The Black Shark 4 series of devices debuted in the first half of 2021. Four months later, the manufacturer is preparing to launch the next generation of gaming devices. And it is the information about this upcoming novelty that is part of the leaks from a reliable Chinese source with a nickname Digital Chat Station. 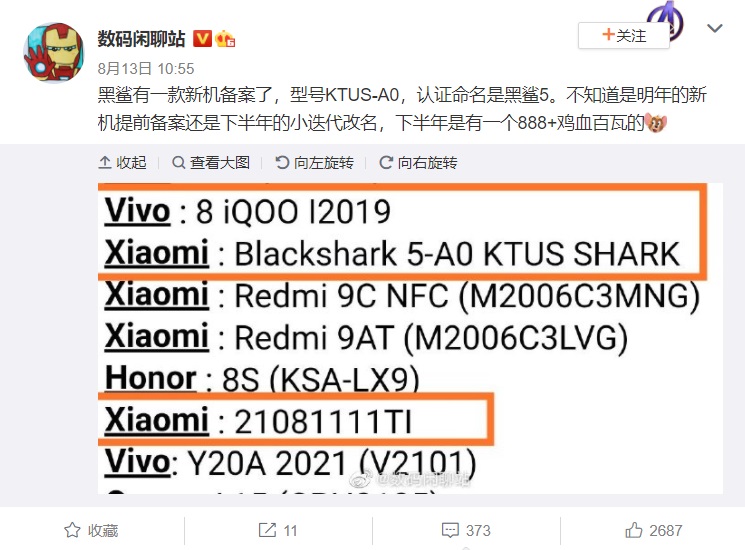 According to this popular profile, the upcoming Black Shark smartphone will come with the code name KTUS-A0. This device is certified under the name Black Shark 5. This clearly indicates that it will be a direct successor to the model Black Shark 4.

The source further states that this gaming smartphone should be powered by the new flagship Qualcomm Snapdragon 888+ 5G processor. It also suggests that the device is likely to offer support for 100W fast charging (it is also likely that we will see a value of up to 120W, similar to its predecessor). However, we do not yet know more information about the upcoming smartphone.

Black Shark 5 thus, while maintaining the mentioned leaks, it should represent a kind of innovated fourth generation called Black Shark 4. It offered in its equipment a 6,67 ″ Full HD + Super AMOLED panel with a refresh rate of up to 144 Hz and a sampling frequency of up to 720 Hz.

The main attraction of the fourth generation were the magnetic mechanical buttons hidden in the side edge of the smartphone (similar to the Redmi K40 Gaming Edition or POCO F3 GT). Other features include LPDDR5 RAM, UFS 3.1 storage, a fluid-based cooling system, 3,5 mm jack, stereo speakers, up to two USB-C ports and a 4500 mAh battery.

How do you like the upcoming gaming smartphone from the workshop of the Chinese manufacturer Black Shark? If you have any questions about this device, you can safely write them to us below in the discussion below the article. Follow our new group on Facebook: Xiaomi Planet - A place for real Xiaomi fans and also our portal Xiaomi Planet and you will learn more.

Xiaomi Enchen Boost is an extremely cheap hair clipper with USB Type-C. With a new coupon now for only € 13