After all, the Xiaomi Mi MIX 4 could be introduced later this year. New statements are coming

Xiaomi introduced its bold series of devices a few years ago We MIX, which brought minimal frameworks and other innovative technologies. After the second generation of Mi MIX 2 and the third retractable Mi MIX 3, fans of this series were hopefully expecting a fourth model called Mi MIX 4.

But a surprise came.

Instead of the new generation of the Mi MIX 4 smartphone, we saw a surprisingly bold and innovative device called I MIX Alphawhich offers a display virtually around the body of the device.

However, it is an extremely expensive and limited piece, which will probably only be sold in limited quantities. So what will happen to the fourth generation of the mentioned Mi MIX model?

Information published did not suggest a few days agothat the new Mi MIX 4 would arrive in the course of 2019. However, new statements on the Weibo social network from the Xiaomi environment bring more light to the whole situation.

Edward Bishop, Promo Manager Xiaomi, has released a recent statement explaining that it did not directly state that the Mi MIX 4 will not arrive this year. 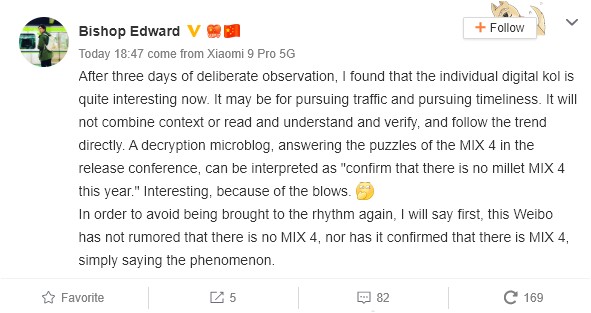 On the other hand, it also adds a statement that it does not directly confirm the arrival of this facility. These statements have sparked discussions, suggesting that the phone itself may or may not be introduced this year.

We are curious how the whole situation around the upcoming Mi MIX 4 model will turn out. It could bring similar, top specifications and a flagship processor as the Mi MIX Alpha, but in a standard smartphone format at a significantly lower price. Follow Xiaomi Planet and learn more.

Redmi 8 will be another cheap Xiaomi smartphone for this year. We know when they introduce him