Poor photos in the dark

He has no NFC

smartphone redmi 8 is the eighth generation of a basic and affordable "for everyone" smartphone. This time it's a very cheap smartphone with a huge battery and good equipment that makes sense. The cheapest version starts just under 100 €.

Is it worth buying despite some compromises? Our reviews will bring answers.


I want a discount on Redmi 8

The box of this device fits in with the eighth generation of Redmi equipment. Colorful color versions of the smartphone with a large model lettering and a standard size that does not deviate from the range. 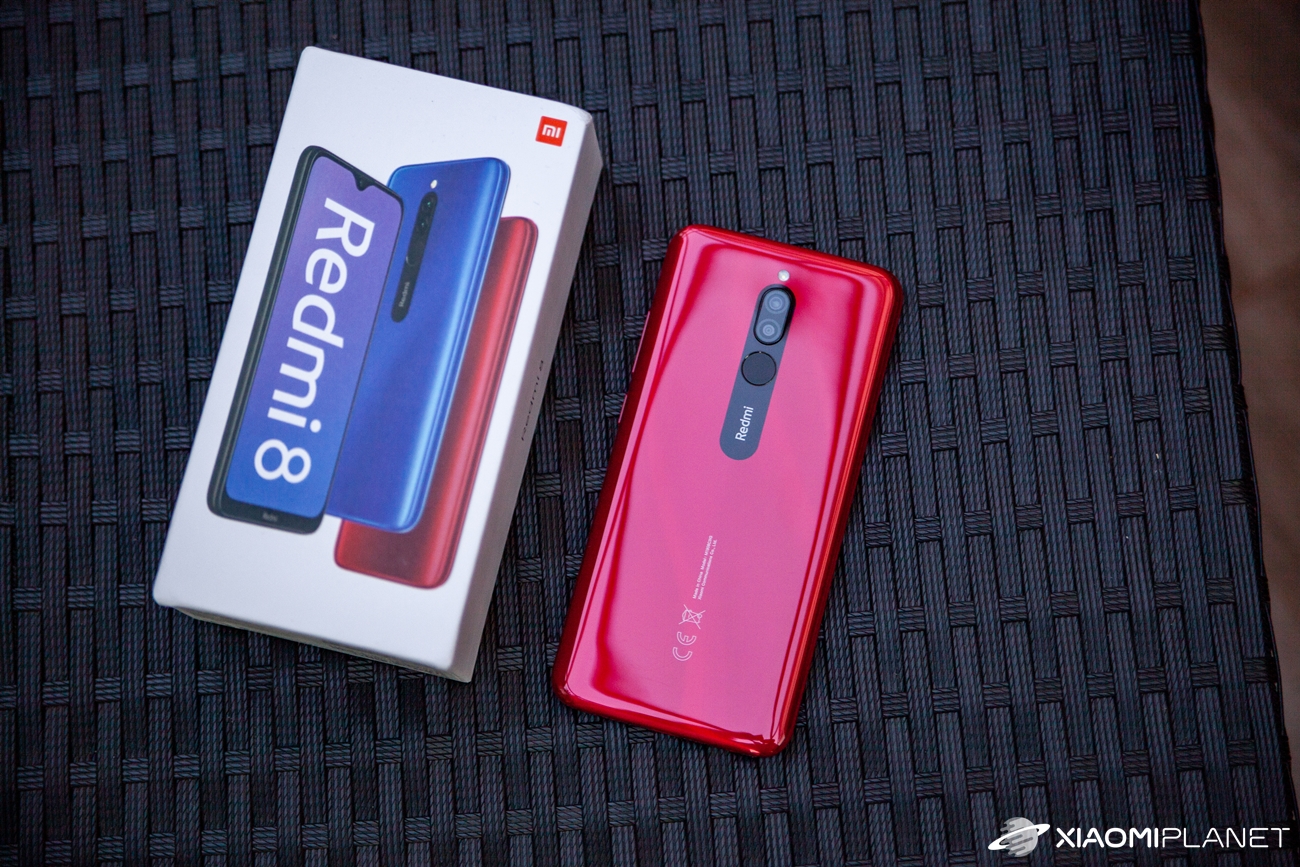 Upon opening, the top of the package traditionally includes a paper envelope with brief instructions, a needle for pulling out the SIM card slot or microSD memory card, as well as accessories.

Yes, exactly, even at such a low price, the manufacturer packed a simple, clear silicone case that also protects the device connector. The housing is relatively thick and has not been spared by the manufacturer in the eighth generation. 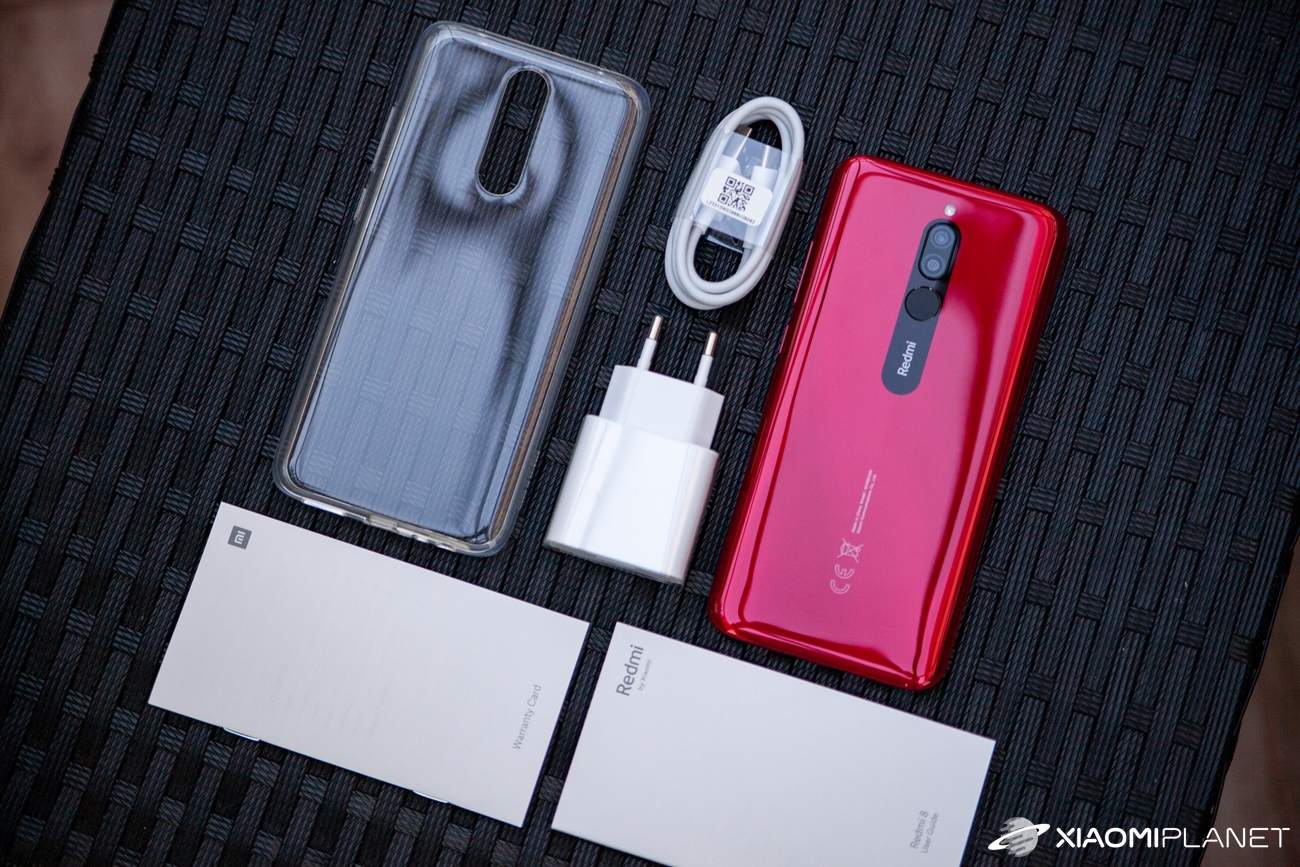 Thus, the package can withstand rough treatment. In the package, the smartphone itself is sealed with protective film, a European charger and cable with a modern and practical USB Type-C connector. The phone supports fast 18W charging, but the charger in the package, but it is a shame.

The phone is largely made of plastic materials, at least in terms of surface treatment of the device. The body, however, holds very well and quality workmanship is missing, parts of the device do not squeak. 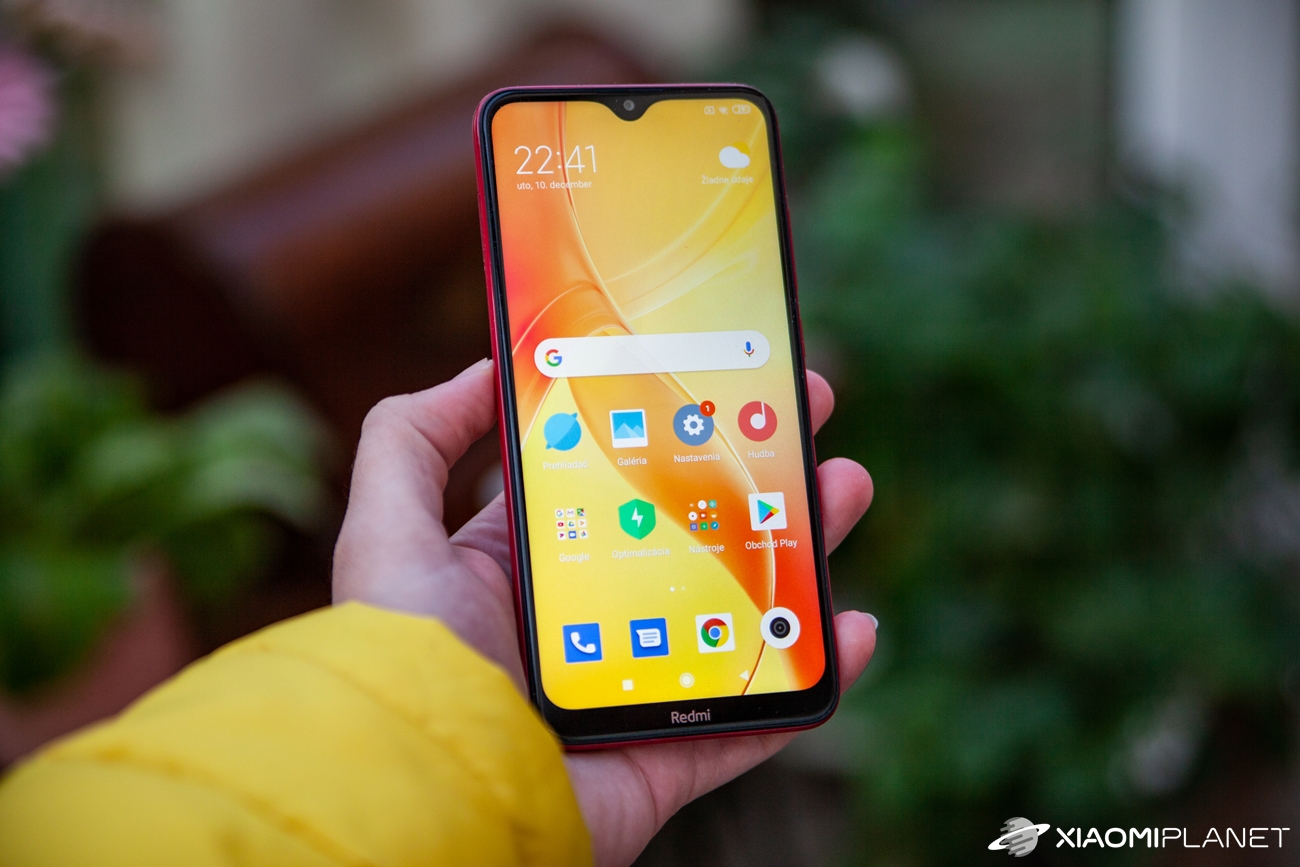 It is a similar style to the body of the device as in the case of its predecessor, while it is definitely no longer a compact device. Its dimensions stopped at today's standard values ​​of 156,5 x 75,4 x 9,4 mm. The weight of 188 grams will pleasantly surprise you, especially considering the large 5000 mAh battery used. 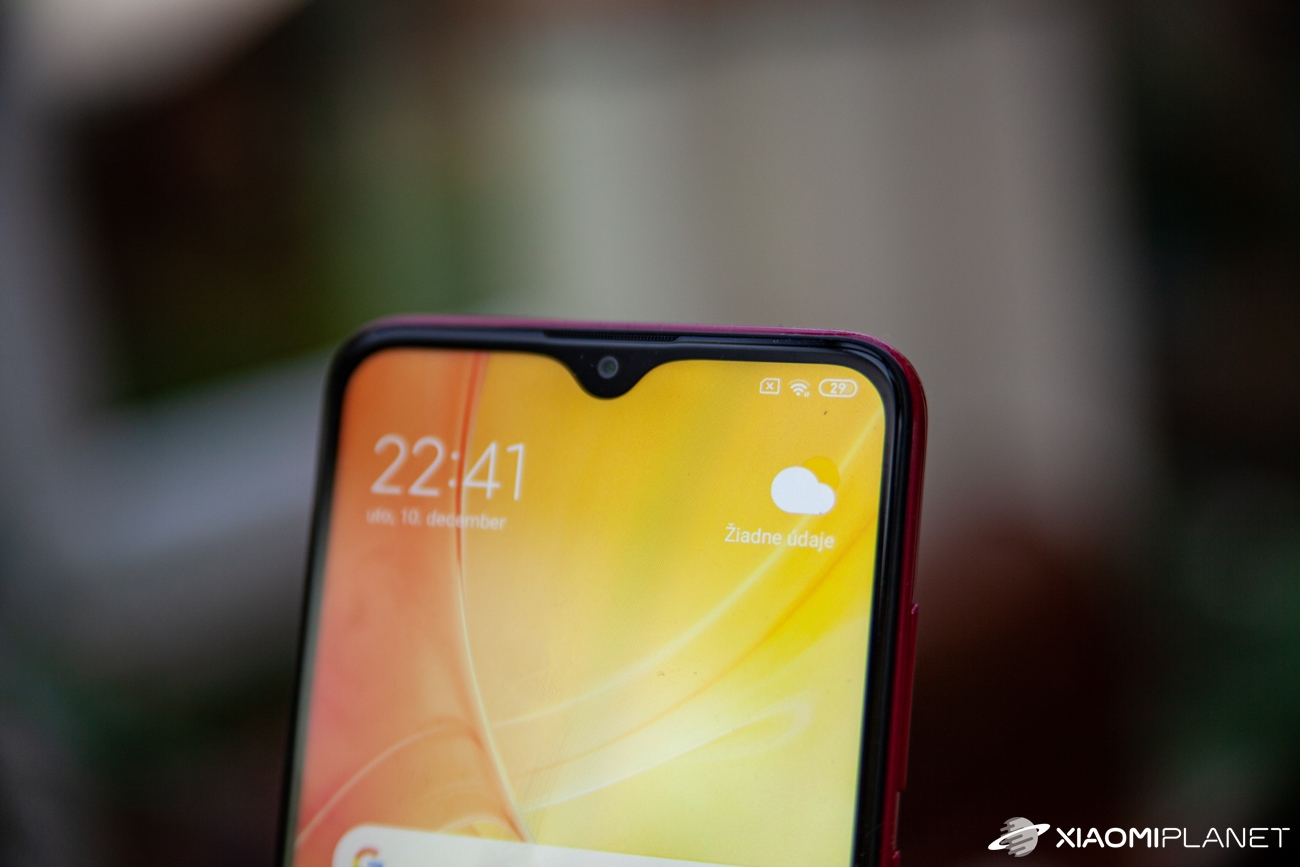 The front side mainly contains a 6,22 ″ HD panel with a drop-shaped cutout, but also slightly wider frames compared to more expensive siblings. However, given the low price, this is not explicitly a negative.

In the viewport, there is a front camera, above it a loudspeaker for telephony (it does not create any “stereo” effect for the loudspeaker) and a small LED for notifications. 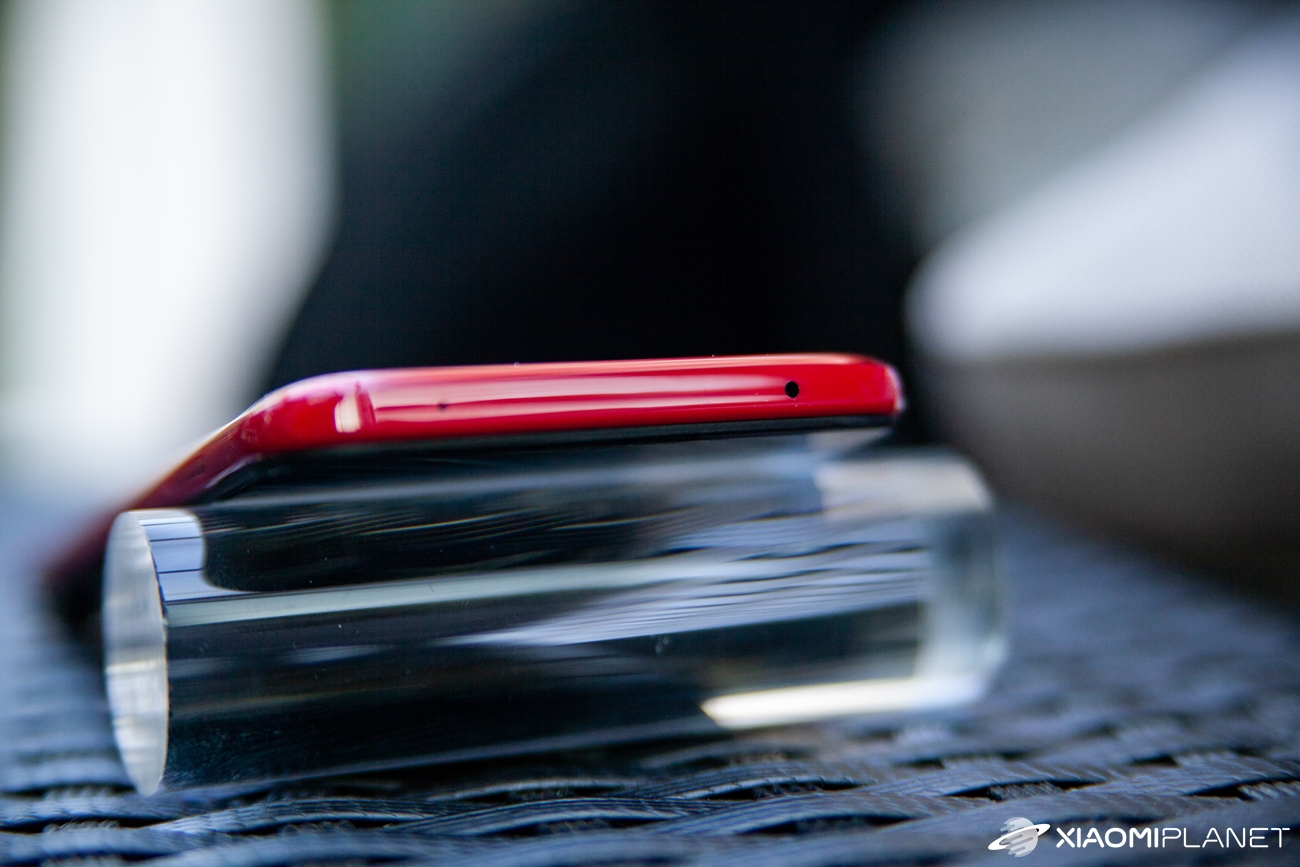 At the top is only a secondary video recording microphone and infrared sensor. This can be used, for example, to control home electronics in cooperation with the pre-installed Mi Remote application. 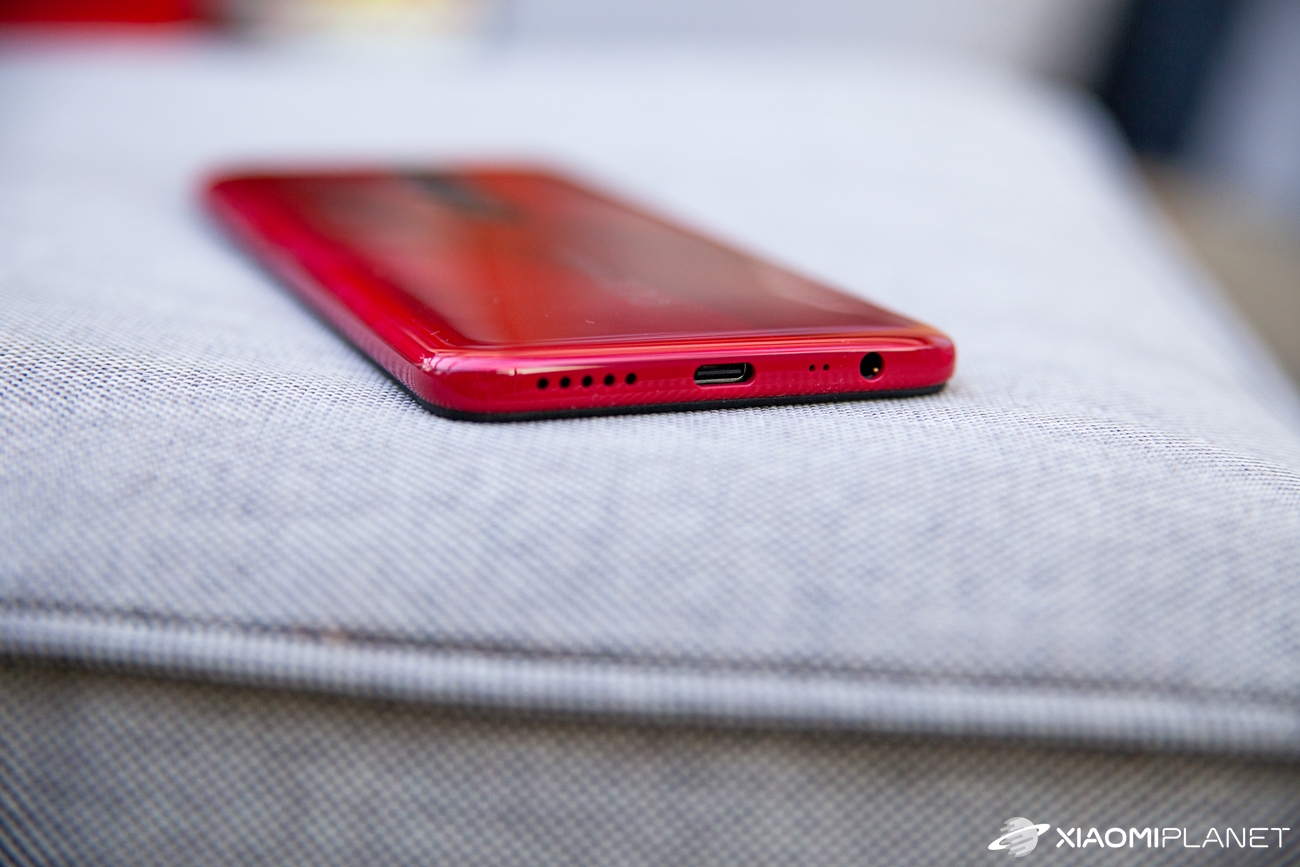 A little more interesting is the underside. It is home to a standard 3,5 mm audio connector, not only a primary microphone for average quality telephony, but also a speaker whose maximum volume we would like to have higher. The USB Type-C connector is a great improvement.

The left side contains only and only a slot for the SIM card or memory card (up to 512 GB), which is a Dual SIM smartphone. This allows the user to decide whether to use the SIM card slot or select one SIM and microSD memory card.

The right side will offer volume control buttons and an on / off button. They are well positioned in height, but their compression, especially in a rigid package, is not very comfortable. However, it is more a subjective feeling when moving from a more expensive model. 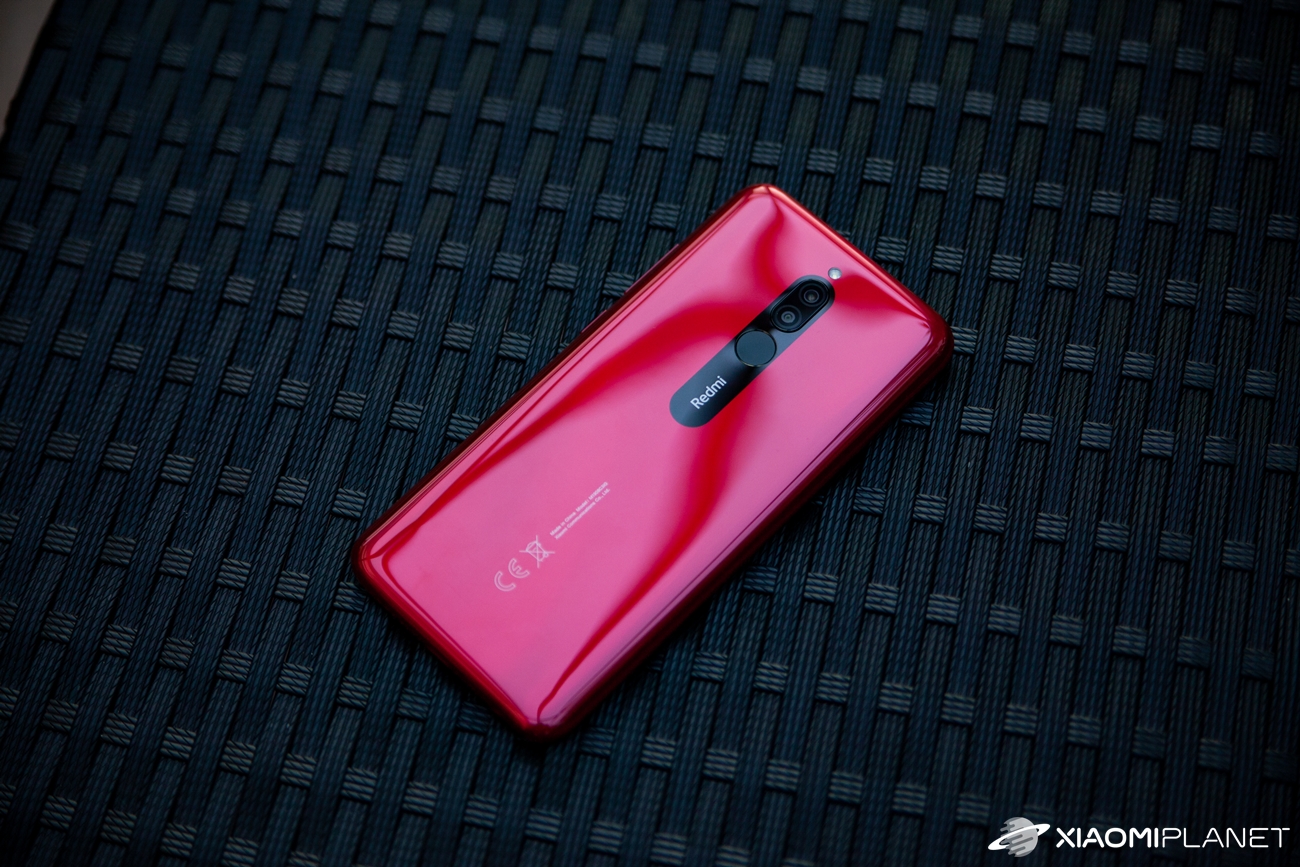 The back includes an LED flash, a pair of rear cameras in a common module, a fingerprint reader sensor, and a Redmi logo. These elements are exemplary below each other in the above-mentioned order, and in the upper half of the rear wall aligned to the center. In the lower half there is only mandatory information on production or recycling.

IPS HD panel following the model of the predecessor

Like the XNUMXth generation, the HD + smartphone also features a panel. It is a slightly thicker panel with slightly worse viewing angles for current smartphones. However, this is not a disaster and if you look at the low price of your smartphone, you will get used to this compromise after a few days. 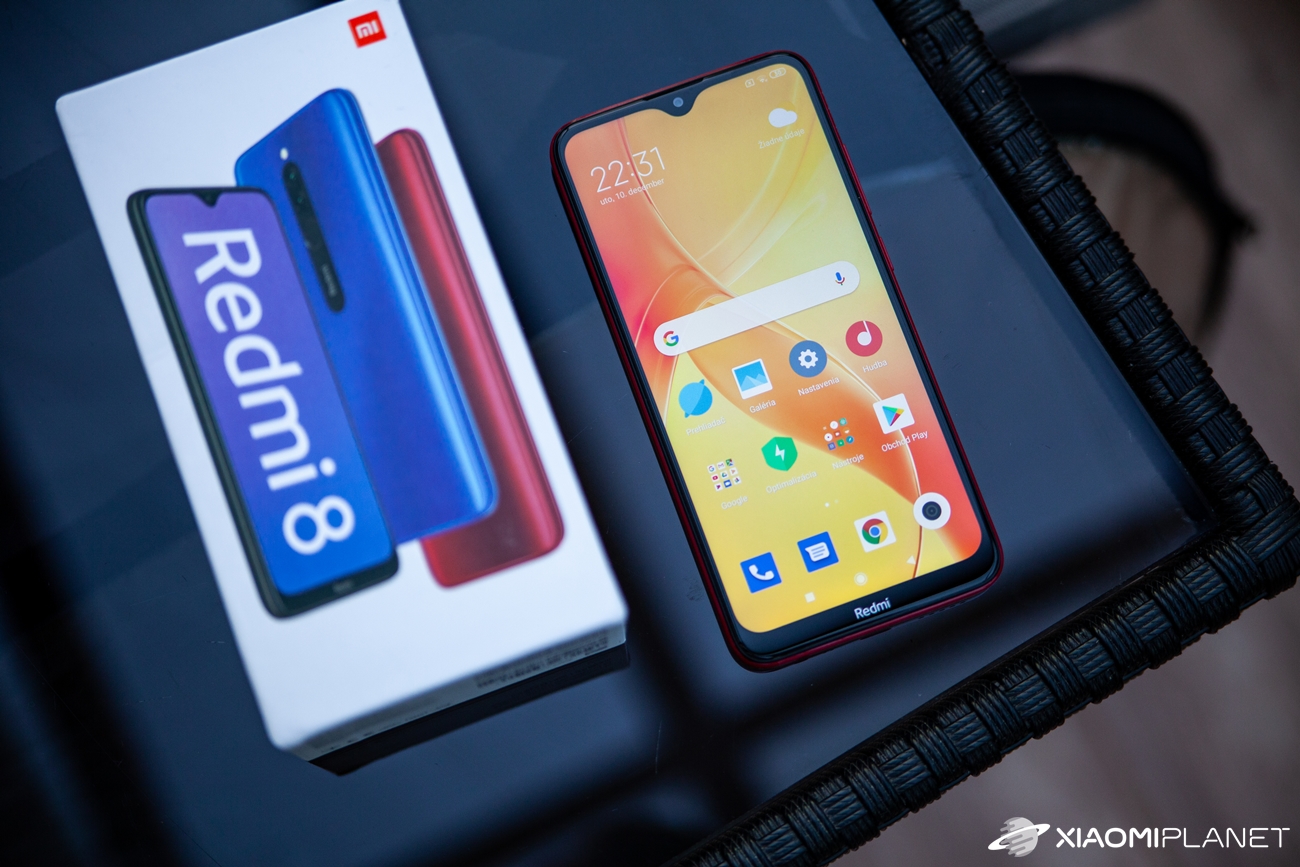 The display is protected by modern Gorilla Glass 5. The maximum brightness of the display could be somewhat higher, but thanks to the IPS technology used, it will offer a fairly true color spectrum.

Its fineness stopped at 207 ppi. Minimum display brightness is fine and does not blind even in total darkness. They also enjoy reading mode and full dark mode within the system.

Snapdragon 439 with emphasis on price

Again we come to compare with the previous generation. She was given a Snapdragon processor of the sixth series while a novelty redmi 8 it only has the fourth. The Qualcomm Snapdragon 439 processor is made with 12 nm technology and has eight cores (2 x 1,95 GHz Cortex-A53 + 6 x 1,45 GHz Cortex A53).

However, the performance of the smartphone is comparable to the previous generation and the choice of a cheaper processor is not perceived as a negative. Quite the contrary, he signed for even better battery life.

The graphics accelerator present in the eighth generation of the smartphone is specifically the Adreno 505. This is a sensible choice with regard to the cost of the device. The phone reacts briskly and the problem is not simple multitasking or graphically less demanding mobile games. The results of the AnTuT tests can be viewed in the attached table.

Although it is a Dual SIM device, there is also a separate microSD memory card slot up to 512 GB. The storage can thus be easily expanded. The cheaper version with 3GB of RAM did not cause us any problems and the system or smartphone response was fast. However, the price difference compared to the more expensive version is minimal.

A fingerprint security sensor is located on the back of the device. This is a standard sensor that can be found in the same module as a pair of rear cameras. However, this is a good location, easily accessible and does not interfere. 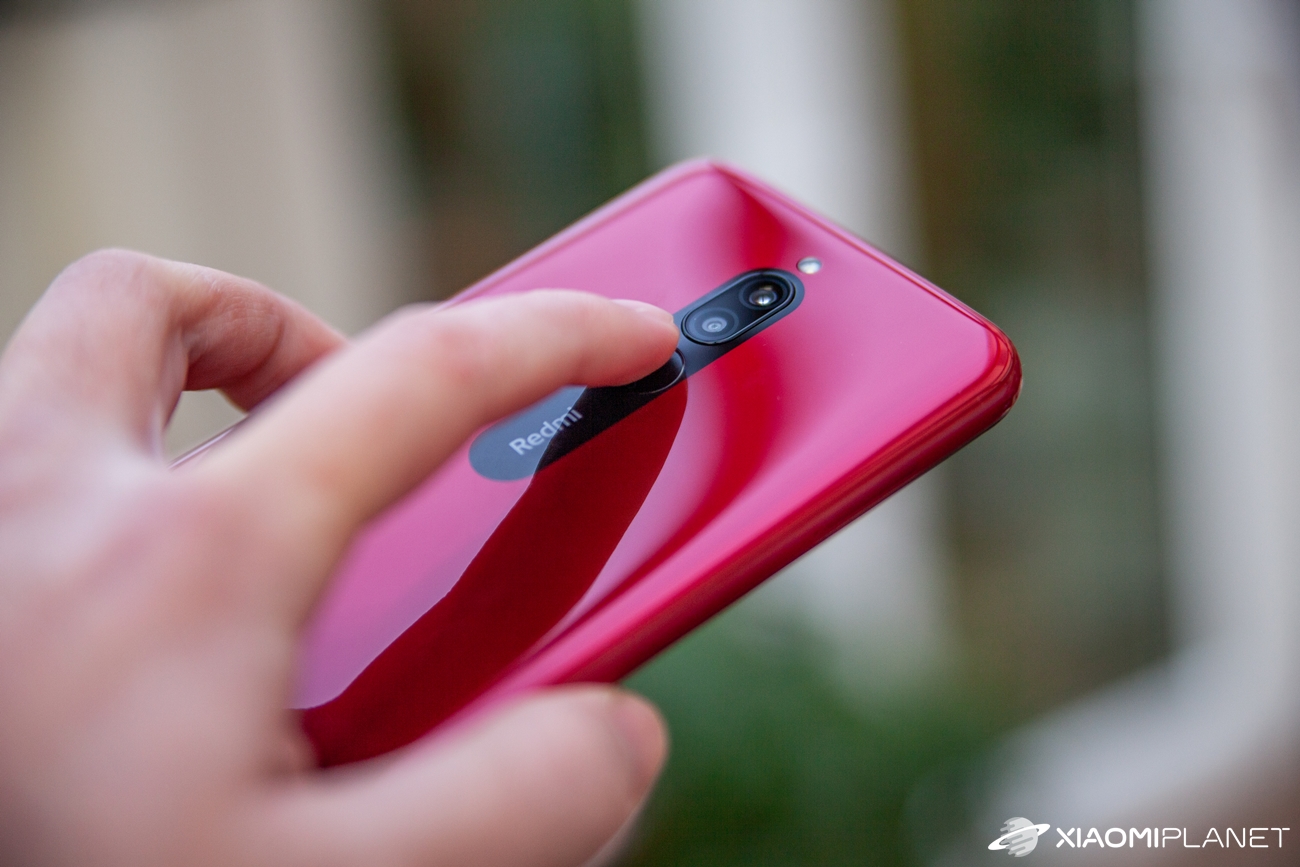 Although the surface of the sensor is plastic and we recommend that you pay attention to scratches, the sensor is really fast and responds very quickly to the unlocking device itself. Even slightly moist or oily fingers are not a problem, we praise the manufacturer's technology.

Your smartphone comes pre-installed with Android 9 Pie. This is relatively up-to-date, although we do not know the date or actual implementation of the latest Android 10 update.

In terms of security, an enhancement package is available from Google on September 1.9.2019, XNUMX. The October and November security update of the system is missing, which the manufacturer could work on.

Also, the latest version of the MIUI superstructure from the manufacturer is not currently available. The version that the smartphone contains is referred to as MIUI 10.3.2.0. You will still have to wait for the latest MIUI 11.

Nevertheless, the phone is nimble and the optimization is good also due to the low price and the hardware used. And selected features such as dark mode and double-tap wake are also available in the current version of the system.

We evaluate cameras in direct proportion

Even a cheap smartphone can now offer photographic equipment that you don't have to be ashamed of. In this case, the smartphone contains a pair of rear cameras. The main one has 12 MPx (f / 1.8). It is complemented by a 2 MPx depth sensor, which has the main task of blurring the background, ie the popular "bokeh" effect. 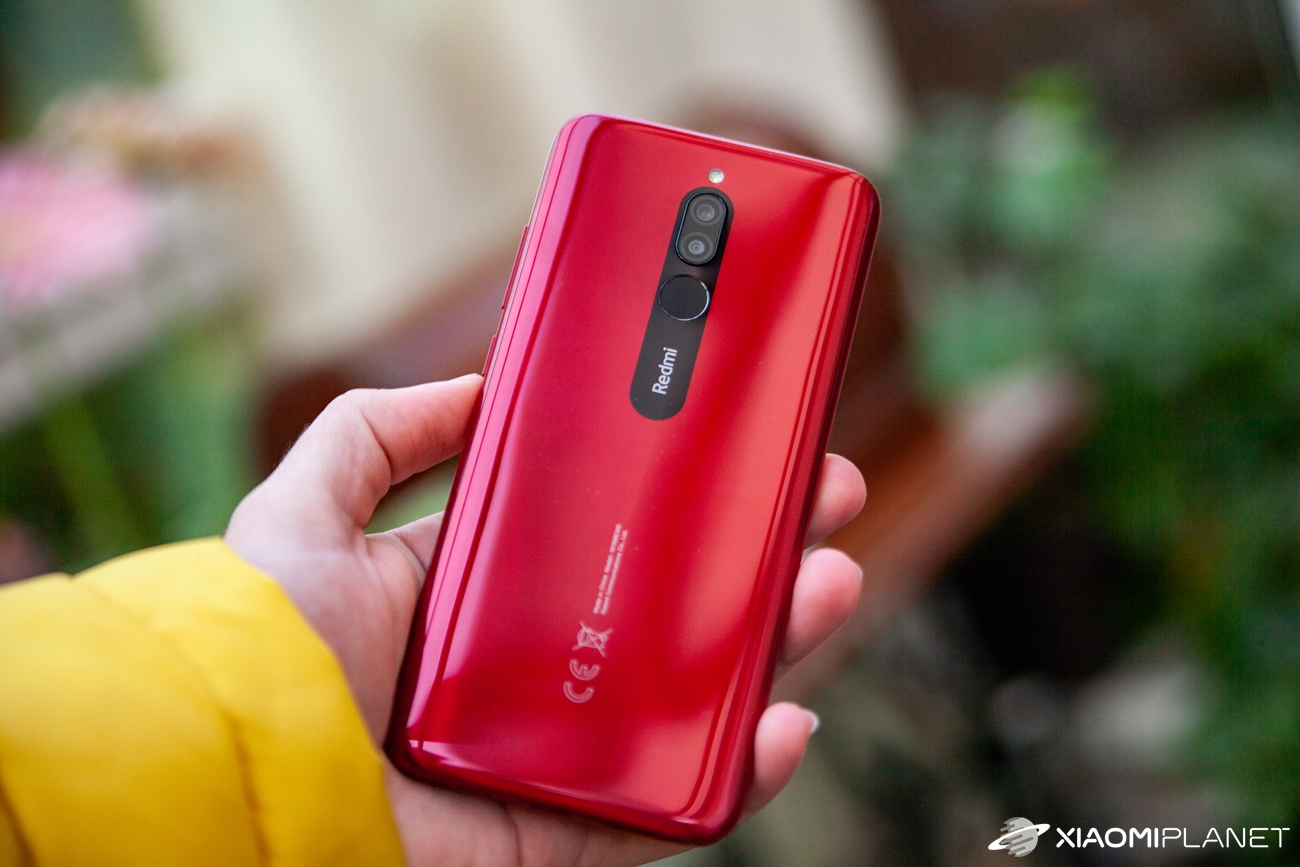 There is no LED flash, the cameras are located in one common module. It gently protrudes from the body of the device, but this problem can be solved with the enclosed protective cover. The video can be shot in 1080p (30 fps), 4K is still missing at this price.

The video is of average quality, but we would accept at least 60 frames per second. The front selfie camera has a resolution of 8 MPx (f / 2.0), it also offers HDR functionality or the ability to shoot similar video in 1080p (30 fps).

The photos themselves are very good in daylight, offer a true color display, good depth of field, and can be captured not only in the 1: 1 or 4: 3 aspect ratio, but also in the 19: 9 aspect ratio offered by the smartphone display.

The situation is worse in the dark or dark, noise comes and the photos are not sharp. Practically we can evaluate that this is a direct proportion. The less light used by the sensors, the less quality and less sharp the resulting photo. In this price range, however, the extra quality of photos is not to be expected.

The missing NFC will not surprise this time

Xiaomi, as the parent brand, was pleasantly surprised this year by placing the NFC chip in cheaper devices, such as Redmi Note 8T whether Redmi Note 8 Pro. But at a price as low as the Redmi 8, we can't expect this technology yet.

For users who would really miss this technology for contactless payments, we recommend choosing one of the above-mentioned models.

4G / LTE networks can also be used in our location in the global version, the B20 band (800 MHz) is not missing.

In terms of battery capacity, the manufacturer stopped at an extraordinary 5000 mAh. Smartphones can look a little heavier or thicker, but it is definitely worth the excellent battery life with which you can reach two days on a single charge virtually without problems.

Sure, you can discharge your smartphone even earlier, for example with a graphically demanding game, but in standard use the percentages are really declining very slowly.

You do not have to worry about the battery, and the device also supports fast 18W charging. Our standard use included active use of social networks, watching HD + videos, as well as hourly telephony and occasional gaming.

Concluding evaluation: For a "hundred" proper piece of technology

For a very attractive and low price, you get a surprisingly fast and agile device that, in addition, takes good pictures in daylight. It offers a large display and really above-standard battery capacity. 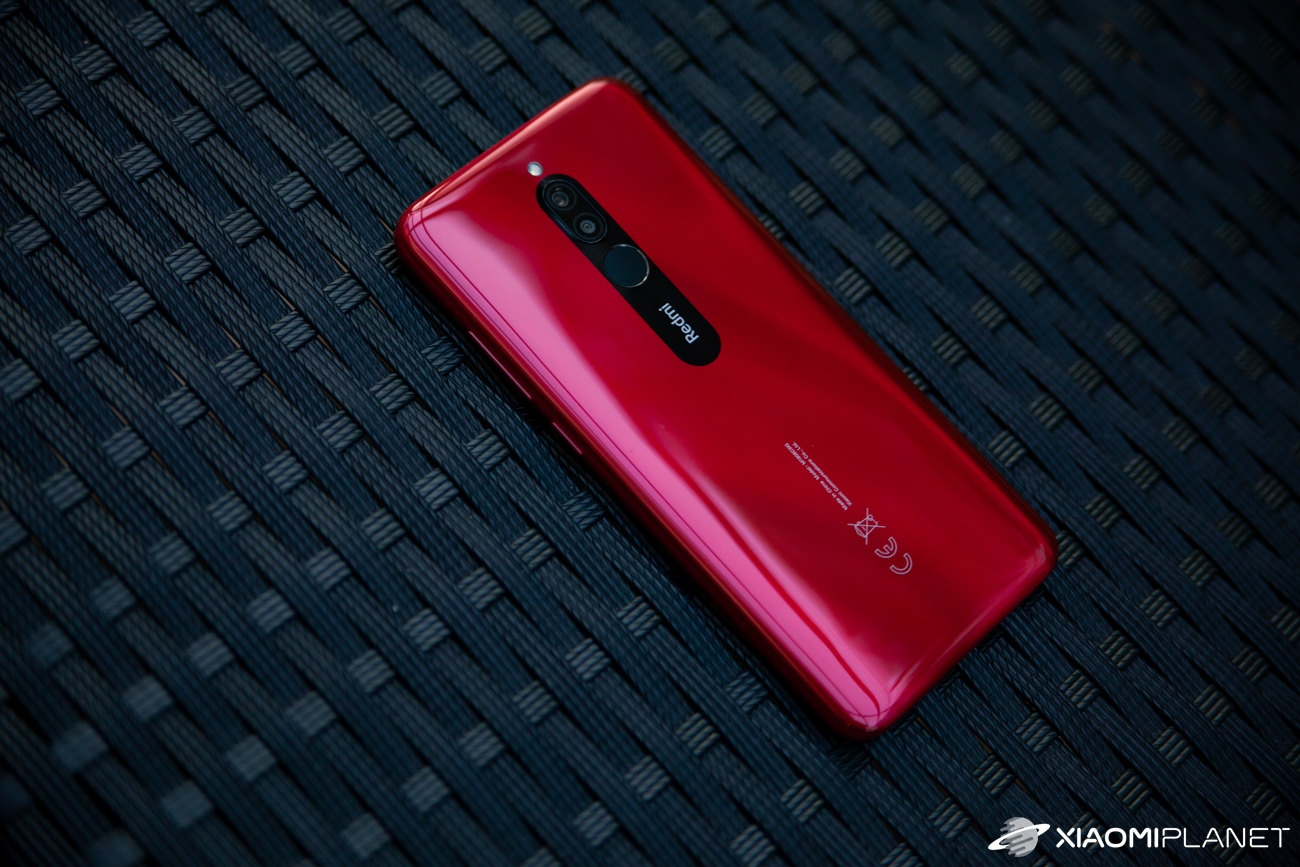 
I want a discount on Redmi 8

So if you can get through a few compromises, such as a thicker HD + display, plastic finish or missing NFC, we recommend buying this smartphone at that price. However, if you expect more from your smartphone, we recommend that you look around for somewhat more expensive models, such as Redmi Note 8T or Notes redmi 8 Pro.