Exclusive Review: Xiaomi with Redmi Note 7 Pro made the mistake of not showing it in Europe - Xiaomi Planet

This year, Xiaomi launched a blockbuster product under its subsidiary Redmi. It's a smartphone Redmi Note 7, whose review we have already published. Now let's take a closer look at an improved sibling Redmi Note 7 Pro.

Although this is a model that Xiaomi decided not to sell in Europe, we decided to prepare an exclusive Slovak review. This model is definitely worth your attention and we wanted to take a look at what Xiaomi deprived us of in Europe.

This seller will bring it to you in Europe

Following the example of its less equipped, but related model, there will be several similar features. One of them is the packaging of the device, which contains practically the same equipment as the standard "seven", even though the design of the box itself is different, tuned to purple.

At the top of the package there are accessories, and therefore a simple silicone case, a few instructions and a needle for ejecting the SIM card slot. Below is the smartphone itself and below it there is a charger (standard) and a charging USB-C cable. The packaging is traditionally pleasing to the proportions of Redmi models.

The plastic body does not interfere

The phone comes with identical dimensions as the standard seventh generation Note model (159,2 x 75,2 x 8,1 mm), while it carries more than a six-inch display panel and also a 4000 mAh battery into its body. There is also enough space for a standard speaker for telephony, a front camera in a drop-shaped cutout or a 3,5 mm audio connector. 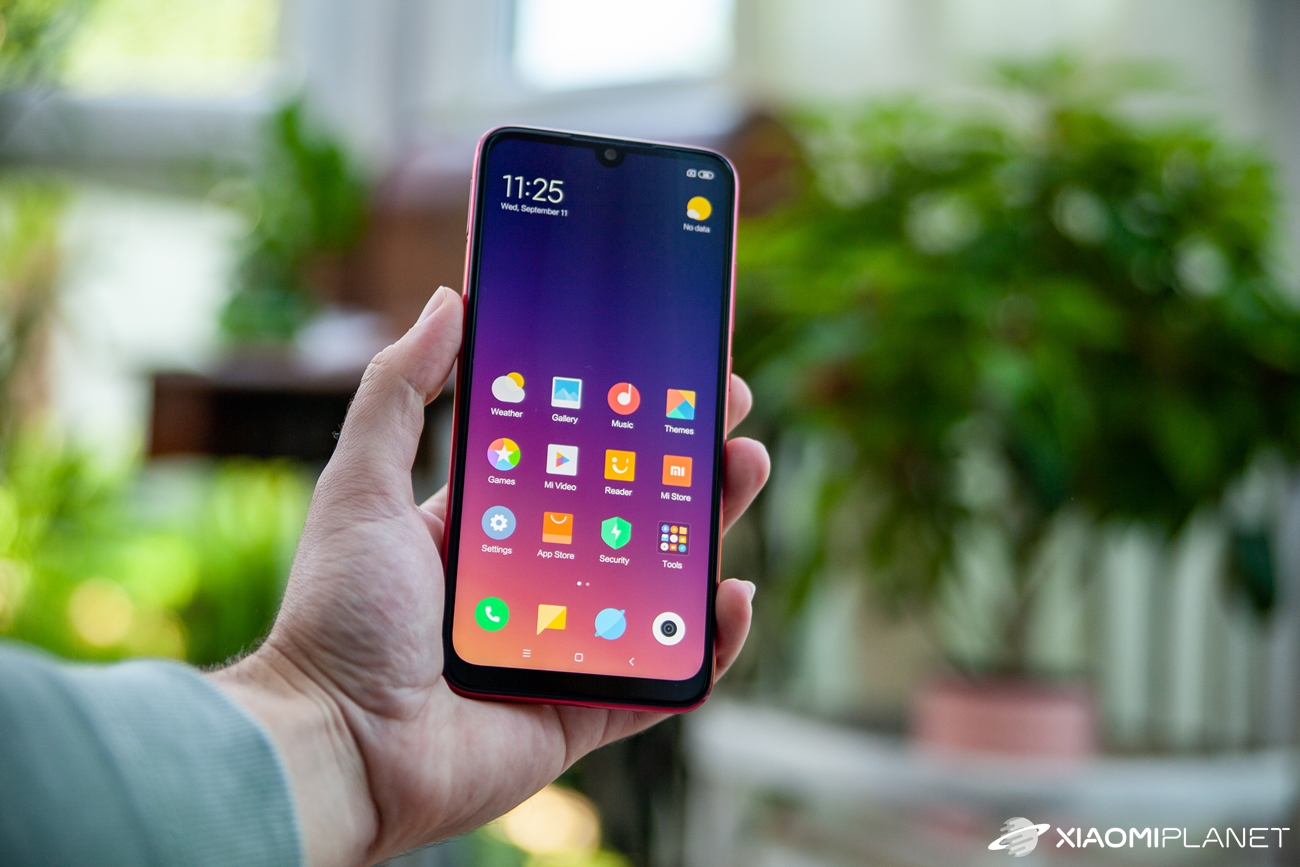 Thanks to the plastic surface treatment, the weight of the smartphone stopped at an understandable value of 186 grams. Along with the dimensions, this is an identical figure with its less equipped sibling. However, the combination of plastic and glass testifies to the smartphone and looks modern. The metal frame, which is located inside, under the cover, then strengthens the body of the device itself.

The layout of the elements is practical

The front offers a 6,3 ″ display with minimal frames, a delicate chin and a cutout at the top. Right in the place of the cut-out there is a front camera, above it a loudspeaker and a group of sensors has also found a place here. The notification LED is surprisingly located at the bottom below the display. However, it is relatively insignificant. 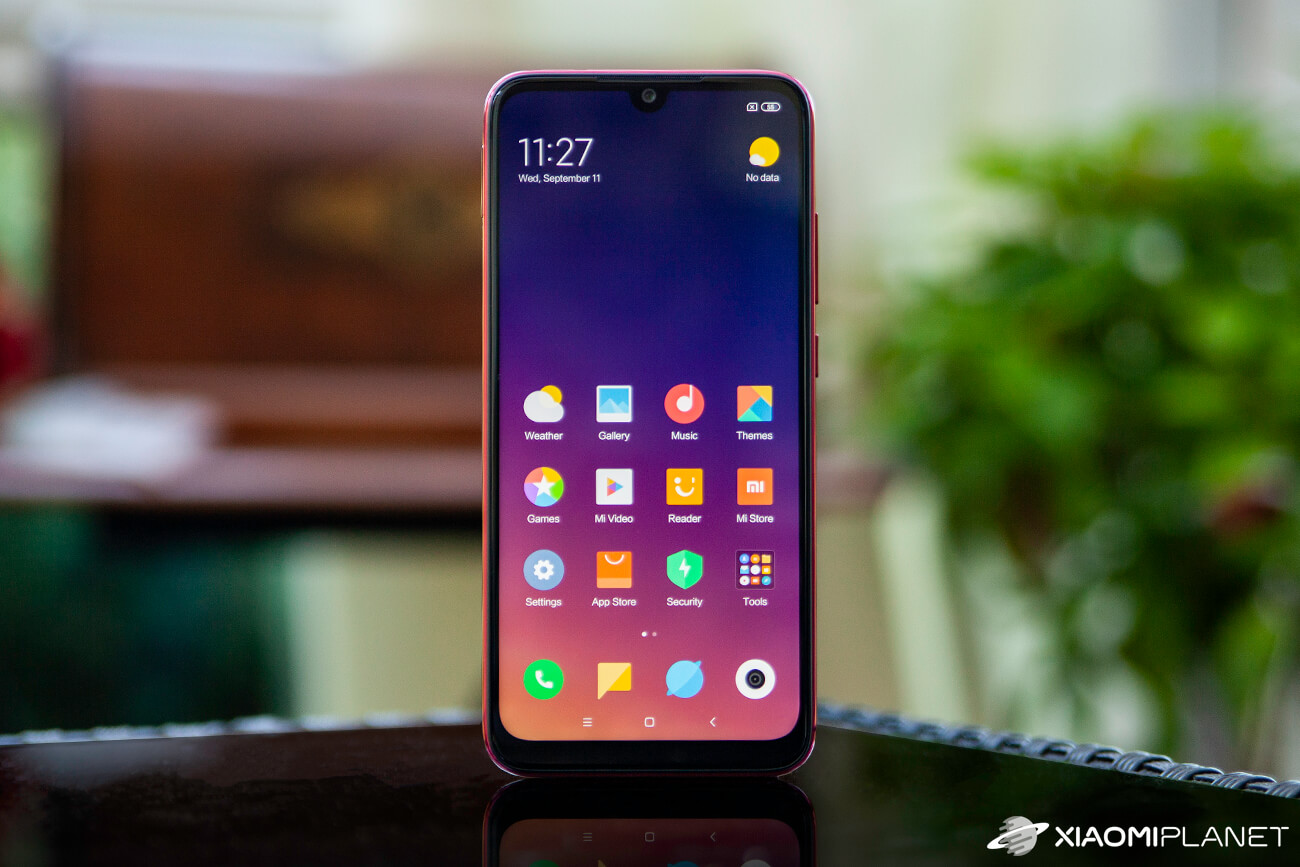 The upper edge is home to a secondary microphone for video recording, there is a 3,5 mm audio connector and an infrared sensor for controlling home electronics. The bottom edge offers a USB type C connector, a primary microphone and a loud speaker.

On the left side you will find only the slot for inserting a SIM card or memory card (the slot is a hybrid, so it is possible to insert two SIM cards or one SIM and one microSD card into the phone). The right side offers control buttons to adjust the volume, as well as to turn the device on / off. The buttons are conveniently located and fit well in the hand. 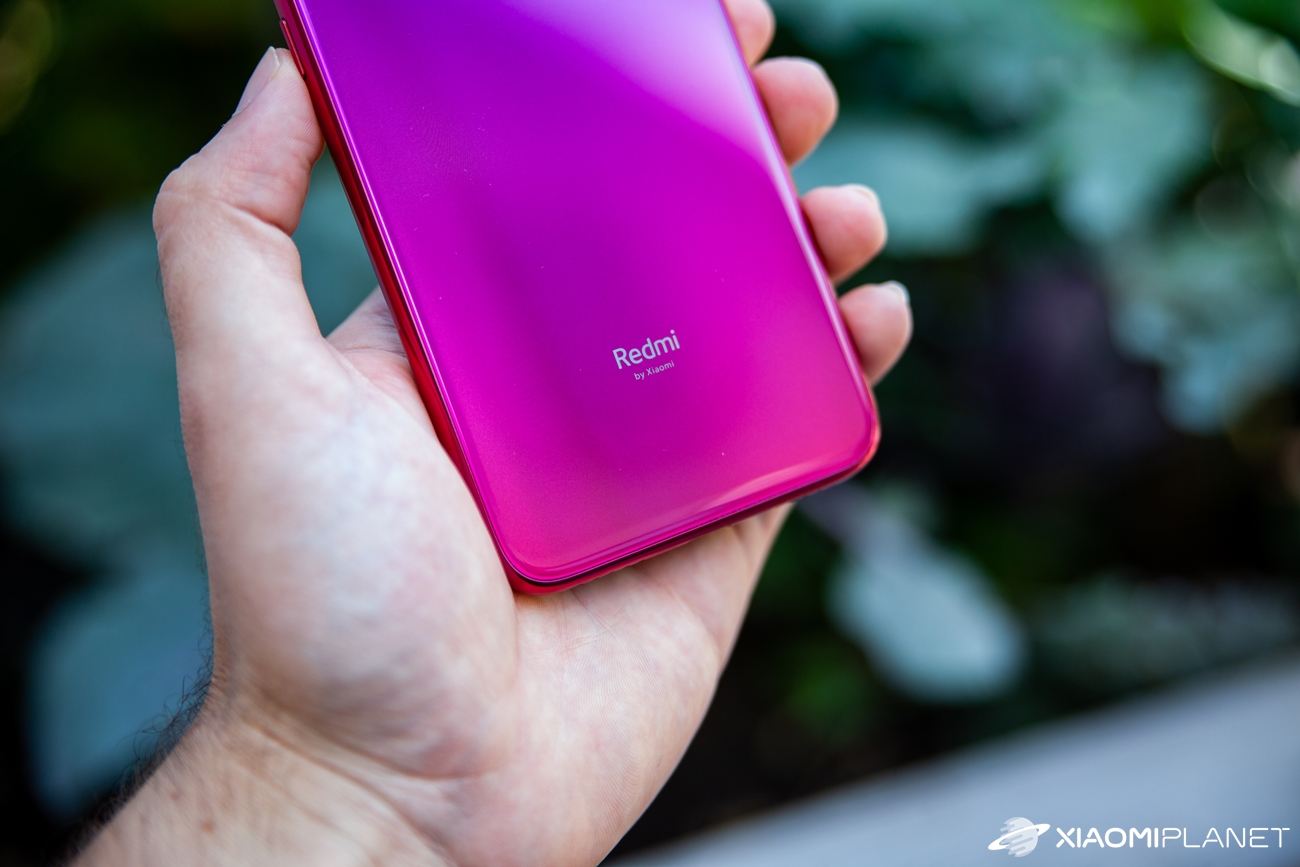 In our case, the back is colored pink-purple and looks really valuable. The color changes based on the impact of light. A pair of rear cameras protrude from the back, followed by an LED flash. Below is a finely recessed fingerprint reader (ideally located) and at the bottom is the manufacturer's logo "Redmi by Xiaomi".

The large 6,3 ″ display panel offers a stretched 19,5: 9 aspect ratio and a resolution of 2340 x 1080 pixels (Full HD +). The overall fineness stopped at the level of 409 ppi, which is not bad at all given the price of the device. Colors draw slightly yellow, but can be corrected in the settings. The viewing angles of this panel are very good, especially due to the type.

It is an IPS LCD panel, which is standard in the given class of smartphones. The display is rounded in all corners of the device and thus suitably complements the overall design of the device. The minimum brightness is sufficient, but the maximum could be even better. We felt it especially in direct sunlight.

And why? Performance is the main improvement over the classic "seven". The older processor in this case replaced the more modern Qualcomm Snapdragon 675 (eight-core, 2 × 2.0 GHz Kryo 460 Gold & 6 × 1.7 GHz Kryo 460 Silver). This is complemented by the Adreno 612 graphics accelerator. The results of the benchmark tests are shown below. 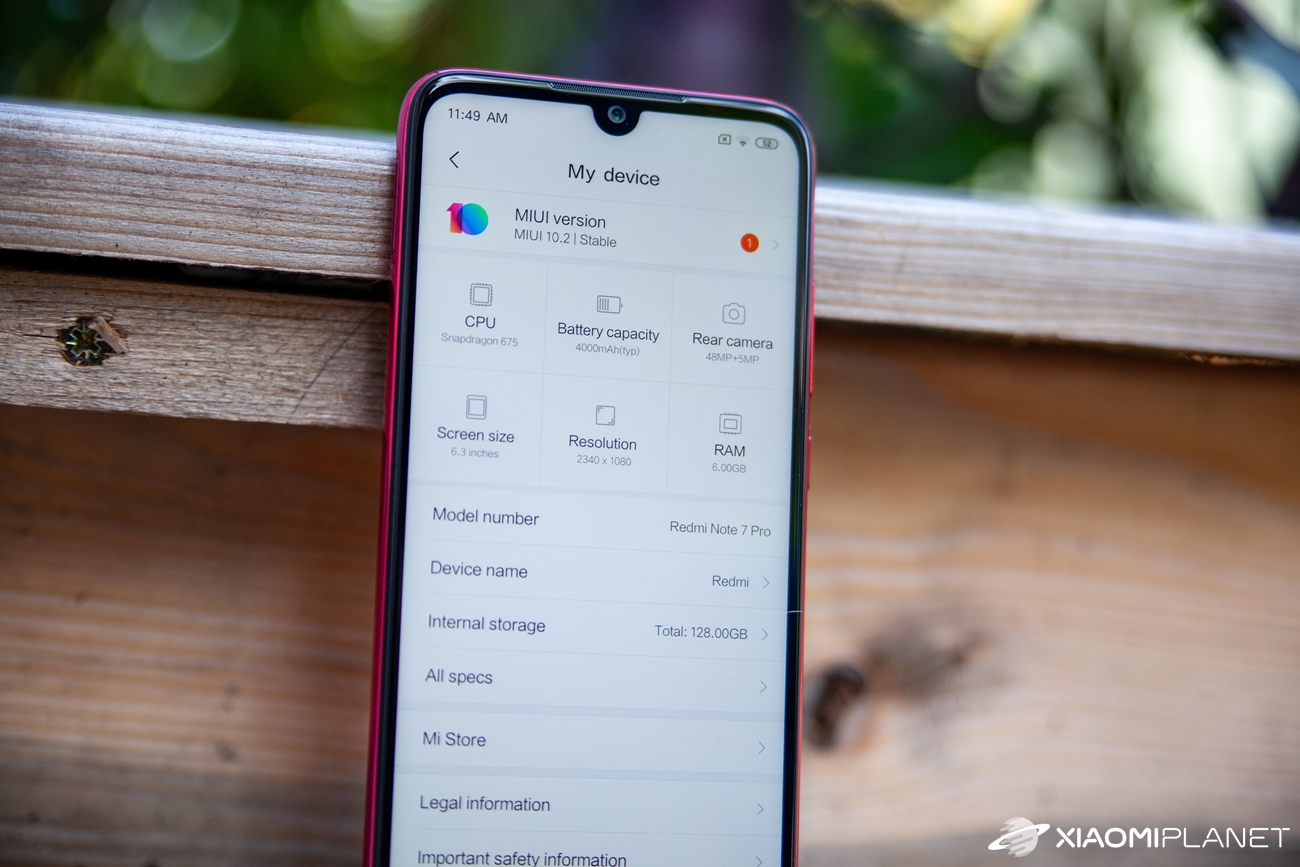 Yes, the truth is, it's not a flagship processor. However, that is not the goal of this smartphone. For standard use and simple multitasking, or playing less demanding 3D games can be done very playfully. The environment is agile and the smartphone responds quickly and reliably, the manufacturer rightly deserves praise.

Up to 128 GB internal storage

In addition, all three versions can be expanded with a microSD memory card (up to 256 GB, the slot is hybrid). However, when choosing a version, it is necessary to take into account that the system itself will take up more than 11 GB. 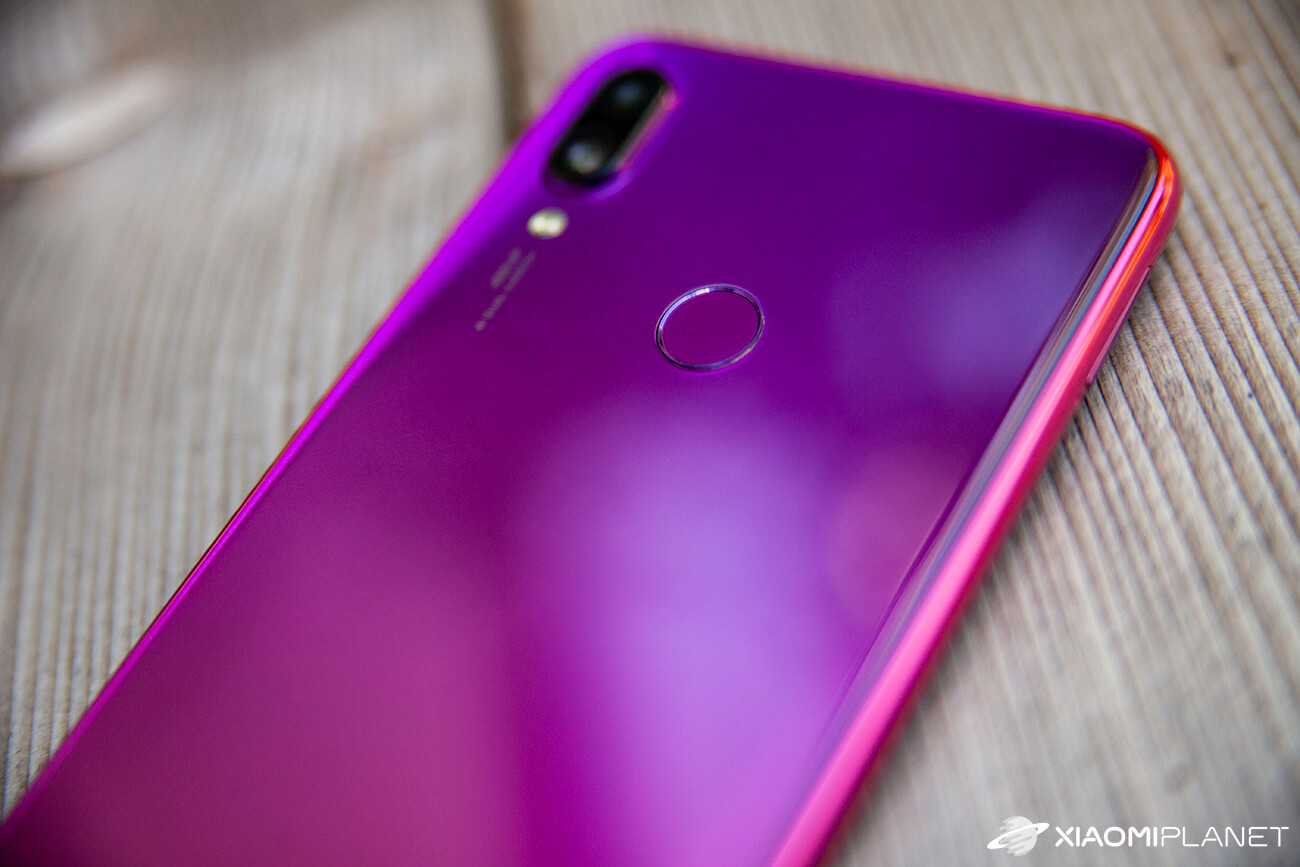 Following in the footsteps of previous models, the current generation also comes with a fingerprint reader located on the back of the smartphone, just below the rear camera lenses. The sensor is easily recessed and therefore easy to feel. It has a quality design, its surface is glass and is characterized by reliability.

Of course, we received the original, Chinese version of the ROM for testing. This model is not sold globally, so it is necessary to rely on imports. Nevertheless, the stable MIUI 10.2.8 does not disappoint in this case either, although we used the smartphone in English.

The optimization is exemplary and we can even confirm that the phone is a bit brighter than the classic Redmi Note 7. We also received a security update during testing.

Although the Chinese system sometimes brings a screen full of "spilled tea", on the other hand, the keyboard and built-in applications can be replaced by an alternative from the Play Store. And this, in turn, along with all the services, is also available in the Xiaomi store that contains the phone. The initial installation is therefore a bit more difficult, but it will only take a moment extra.

The cameras come in literally the same equipment as the many-folded standard Note 7 model. The rear 48 MPx (f / 1.8) is complemented by a 5 MPx depth sensor for a "bokeh" effect. Video can be recorded up to 4K (30 fps) and the front camera offers 13 MPx and HDR. Great equipment due to the price, but it has one "but". 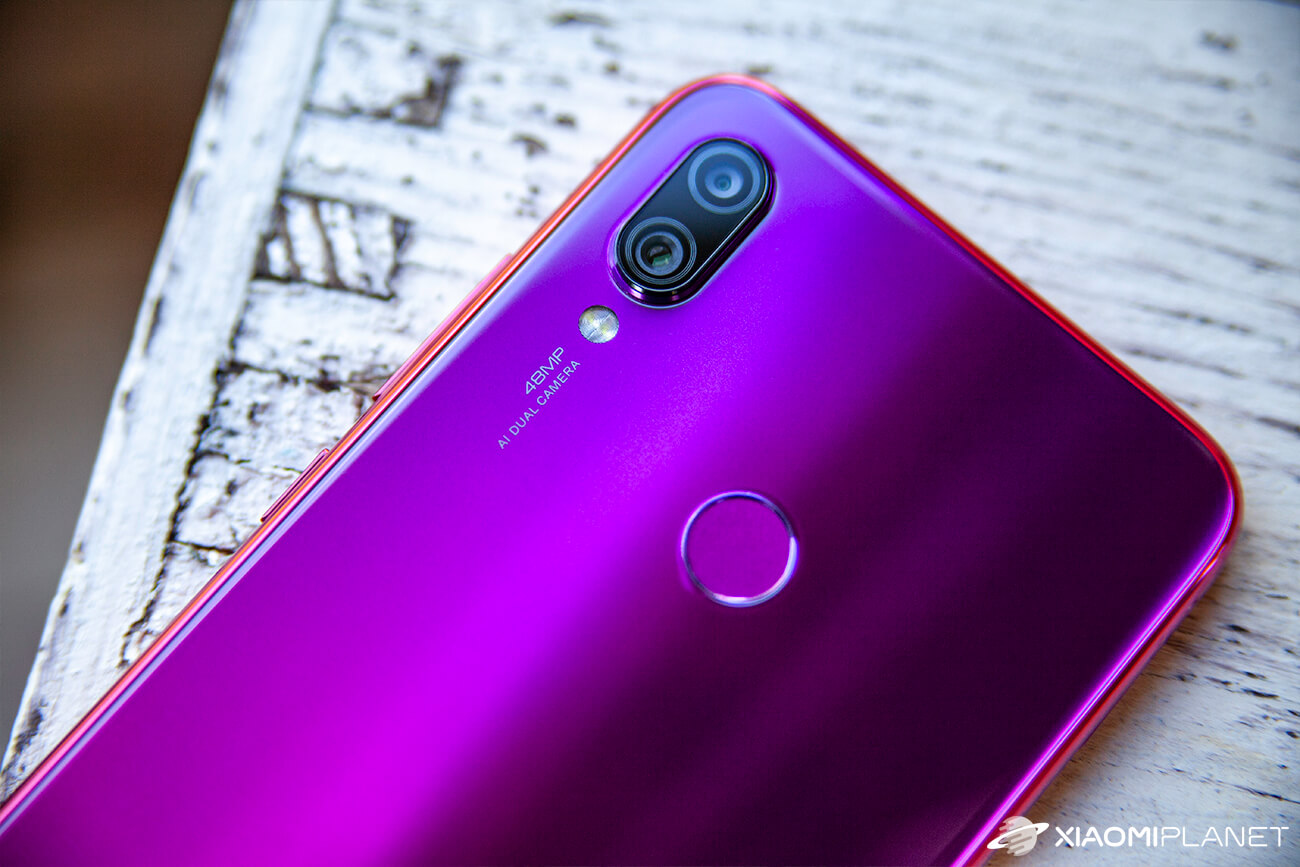 These are evening and night photos. Night mode will help, but the photos have a lot of noise and are out of focus. In this case, it stands out that it is a cheaper smartphone. However, with increasing light, the quality improves and during the day, the smartphone really surprises at its price.

Color rendering, sharpness and zoom are fine. However, be careful with 48 MPx photos. They are available in "Pro" mode and their size is approximately 13 MB / pc. On the contrary, you will enjoy other modes, including HDR, group selfie or AI shooting.

Full-size original photos are available in the following link.

In the gallery below we bring you a preview of photos with daylight, photos taken in poor lighting conditions, full 48 MPx photos, but also macro photos. Sample photos in the gallery are scaled down for review.

We can't wait for NFC

The smartphone has another significant weakness in our region. It is the absence of an NFC chip, which is not as widespread in Asia as in our country. Cheaper models of it from Xiaomi or. Reds rarely receive it.

The most used band in Slovakia and the Czech Republic, LTE B20, so it is missing and if you decide to buy this smartphone, you have to prepare for 3G mobile internet outside the cities. In cities, the smartphone connects to the 4G network without any problems.

Powerful battery modeled after its predecessors

4000 mAh in the bowels of the device is a guarantee of stable endurance even in demanding use. The smartphone can easily withstand a demanding working day (hourly telephony, frequent use of social networks, web, e-mail, multitasking and occasional video watching), even with a rich reserve in the late evening.

However, despite the standard usage, the statistics in the smartphone settings did not show the correct data (message 0 s per battery). However, this is probably a software issue that could be resolved by one of the following updates.

This seller will bring it to you in Europe

The "pro" version is defending its place in the market, and although it is not officially imported into Europe, its improvements are worth noting. Quality workmanship and a surprisingly good camera remain, an improved processor and RAM are added, thanks to which the phone is much faster to learn. It will freeze the need to deal with Chinese ROM, incomplete support for LTE networks in Europe and also the lack of NFC.

Xiaomi Mi MIX Alpha will be the fourth generation of the MIX series. It comes with a strongly curved display