The new 5G smartphone from the workshop of Redmi, a subsidiary of Xiaomi, is to be launched later this December. Carries the mark Redmi K30 it should also be equipped with a high refresh rate display 120 Hz.

This is confirmed by the latest live photos published by a verified website xda-developers.com.

Although we do not yet know the exact design of the smartphone, the leaked photos reveal at least the device from the front. We can observe the shot in the display with a pair of front cameras, but also the possibility of switching between 60 Hz and 120 Hz display mode to save battery power.

It may seem that Xiaomi is slightly behind the market with such screens, but they still rely at high 120 Hz, similar to Apple with its iPad Pro. The competitive OnePlus offers a 90 Hz display.

Screenshots reveal additional system information or technical specifications. We can look forward to a 6,66 ″ display with a resolution of 2400 x 1080 pixels and also to an unspecified Qualcomm processor with Adreno 618 graphics accelerator. 730G. 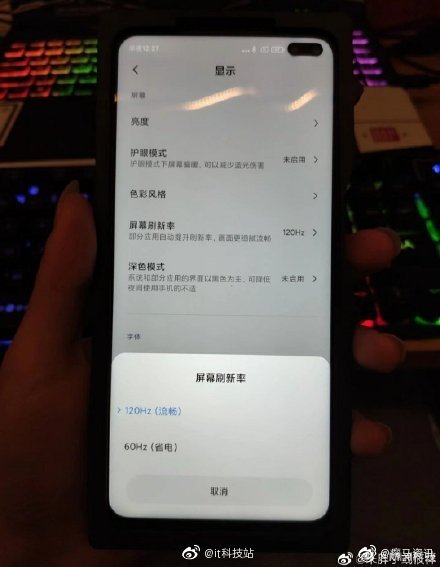 The phone also offers a reading mode, but also a dark mode, which is also suitable for saving battery power, especially with AMOLED panels. The captured model contains MIUI 11 in version 9.11.18 and 64 GB of internal storage.

This is probably the basic model, but we expect other configurations as well. Estimated smartphone price Redmi K30 we don't know yet, but the assumption remains that the price remains higher than it was in the case of the introduction of the previous Redmi K20 model.

As soon as the Redmi K30 model is on sale, we will send you a coupon by e-mail.