Xiaomi announces a new cooperation agreement with the Mercedes-Benz brand

Chinese manufacturer Xiaomi announces through social networks a new cooperation agreement with a German company Mercedes-Benz. This is not the first establishment of communication between the two companies. Xiaomi supports the Mercedes AMG Formula 1 team, which has also earned a limited edition electric scooter.

Just after the launch of a new limited edition electric scooter, the Chinese manufacturer Xiaomi apparently has new plans. Cooperation with the premium German carmaker Mercedes-Benz should start as early as September 7, 2020, with the new flagship smartphone playing a key role in this cooperation. Xiaomi mi 10 ultra. 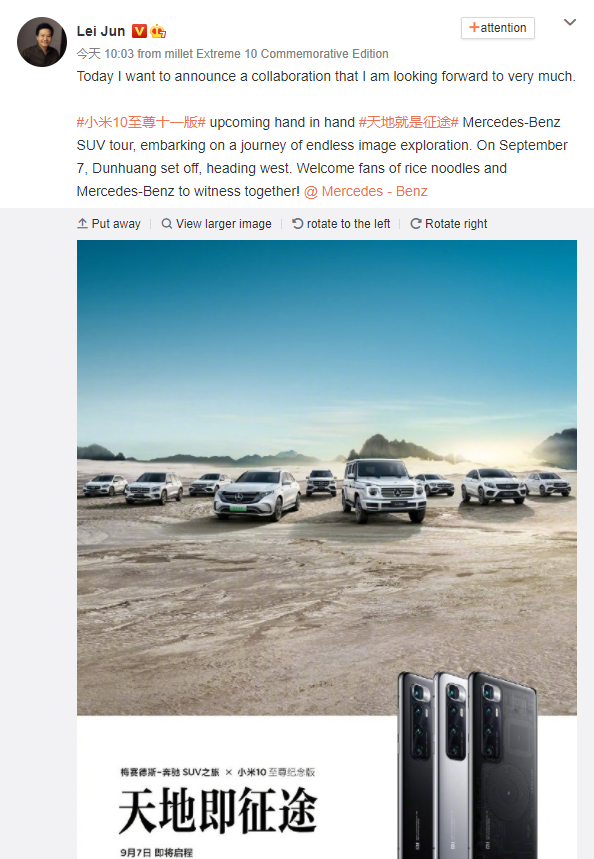 Xiaomi's CEO, Lei Jun, announced the new cooperation agreement with the German carmaker via social networks. The new advertising poster, which he published together with the contribution, points to the new Mercedes-Benz SUV together with the mentioned flagship smartphone Mi 10 Ultra.

We do not yet have detailed information about this cooperation. However, according to available information, Mercedes-Benz is expected to launch an advertising campaign with its family of new SUVs, which will be uploaded directly to the flagship Mi 10 Ultra smartphone.

A really interesting and curious cooperation will definitely appeal to lovers of both brands. The official announcement of the new Xiaomi-Mercedes-Benz cooperation agreement will take place on Monday 7 September 2020.

Do you like the new inter-brand collaboration agreement Xiaomi a Mercedes-Benz? How would you like to imagine this cooperation? You can easily write your observations and opinions to us below in the discussion below the article. Follow the portal Xiaomi Planet and learn more.

Xiaomi is preparing another model from the Xiaomi Mi 10 series. It will arrive in September for a price below € 300

Coupons for accessory packages for robotic Xiaomi vacuum cleaners. Many of them also in CZ warehouse