Xiaomi Mi 10 Pro at the top of AnTuTu: It has become the most powerful Android smartphone on the global market - Xiaomi Planet

Xiaomi Mi 10 Pro at the top of AnTuTu: It has become the most powerful Android smartphone on the global market

Application AnTuTu publishes the top ten most powerful Android devices each month. These are average results, not random testing.

The Chinese lead the charts again this month Xiaomi and thus repeated its success among the most powerful smartphones in the global market.

The performance that other smartphones may envy is the result of the average AnTuTu of model tests Xiaomi Mi 10 Pro. In a configuration of 8 GB RAM + 256 GB storage, equipped with a Snapdragon 865 processor, the smartphone received 593 points in the first place.

The third place belongs again to Xiaomi, again with a Snapdragon 865 processor. Model Xiaomi Mi 10 scored a total of 580 points.

Samsung lags behind the leader

With the same processor, it placed fifth Samsung Galaxy S20 + 5G with a gain of 518 points. 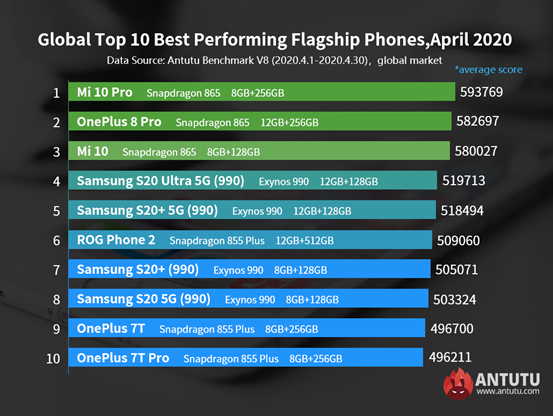