We've only recently published a related article on our website with initial information about the new smartphone from the Mi 11T series. Specifically, it was a device called Xiaomi Mi 11T Pro, ie the direct successor of last year's Xiaomi Mi 10T Pro.

A few moments ago, other interesting news about the expected family of Xiaomi Mi 11T smartphones came to the Internet. This time, the equipment of the basic Mi 11T model was revealed to us. It looks like we have something to look forward to.

A photo revealing the specifications of the Xiaomi Mi 11T smartphone has appeared on the renowned xiaomiui.net portal. The Mi 11T model will be introduced on our and Indian markets, while in the domestic China it will be a smartphone with the Redmi K40 Ultra designation. 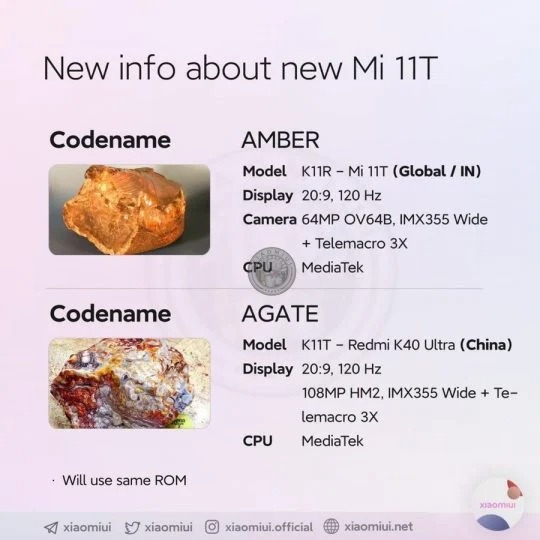 As for the specifications themselves, under the hood of the device we find a processor from the MediaTek workshop, probably a model Dimension 1200 5G. The 20: 9 aspect ratio display will have a refresh rate 120 Hz. It is speculated that it will be an OLED display.

The smartphone offers three cameras. The main sensor OmniVision OV64B with resolution 64 MPx will second the widescreen sensor Sony IMX355 and the trio is closed by a telemacro sensor with by zooming in three times.

In the home of China, this smartphone will be introduced under the name Redmi K40 Ultra. The currently known difference will be only in the main sensor, whose role will be taken by the Samsung HM2 sensor with a resolution of 108 MPx.

The global market launch could take place sometime in October, one year after the launch of the global version of the Xiaomi Mi 10T. However, all the information mentioned today is only a guess and nothing has been officially confirmed yet.

We will continue to monitor the entire situation in detail and then publish all the news on our Xiaomi Planet technology portal. If you want to be the first to know about everything important, join our group on Facebook and subscribe to interesting articles directly to your email inbox.

Haylou RS3 as the most beautiful smart watch of the brand with a record coupon: Round design, AMOLED, SpO2 and built-in GPS