Xiaomi is thinking about a compact smartphone - Xiaomi Planet

Compact mobile phones still have their fan base and are extremely popular even in times of large diagonals. The only problem is their lack.

Xiaomi also has a compact smartphone in its portfolio and it is last year's Mi 9 SE, which, however, can no longer be bought and with his successor, it hadn't looked very rosy until now.

Will we finally see a compact Xiaomi smartphone?

The current trend of smartphones is mainly focused on enlarging screens. Therefore, it might seem that the group of users of "small" phones has already been forgotten. Xiaomi is also one of the companies that has moved towards the big screens, but this could end with the introduction of a compact smartphone. 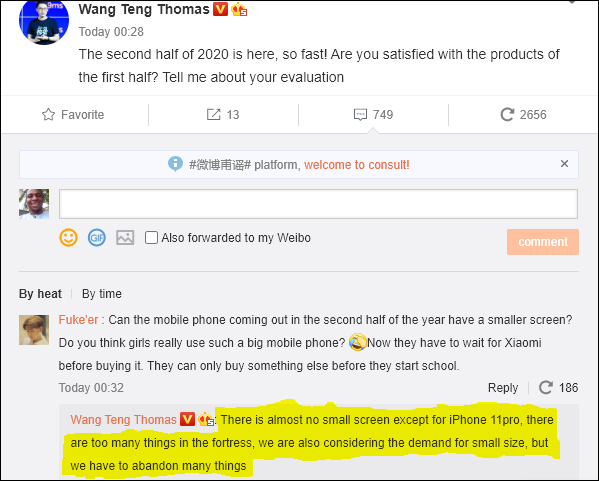 According to new statements from the company's product manager redmi, we might finally be able to see this year's dream compact smartphone from a Chinese company.

Wang Teng Thomas confirmed that Xiaomi / Redmi is considering re-producing smartphones with smaller screens. He did not mention the specific size of the display yet.

The SE series could be renewed

However, a valid decision has not yet been taken. The problem may occur when integrating new hardware components into a smartphone with compact dimensions.

These claims from Xiaomi leave the door open to that possibility SE smartphone series can reappear in the menu among an already wide range of devices. The market for compact smartphones is still closely monitored, but not every manufacturer dares to continue their production.

Definitely positive news, as not everyone likes big displays. How are you? Do you prefer smaller diagonals?

Finally available: The most powerful Xiaomi Mi 10 Pro can be re-ordered and we have a great coupon