The new flagship model from Xiaomi has appeared in Geekbench tests

Spoločnosť Xiaomi has been preparing another model for its flagship smartphone portfolio for a long time. The expected novelty appeared in the service tests Geekbench, we know the performance tests, code designation and some technical specifications.

With Xiaomi's flagship phones and its subsidiaries, the bag has really torn in recent weeks. First, we came up with leaks of information about the upcoming smartphone Xiaomi Mi 10 Ultra, there were also reports of the upcoming smartphone Redmi K30 Ultra and now the Chinese manufacturer is completing preparations for another model.

According to available information, the novelty should come with the code name Xiaomi Apollo. However, we do not yet know the entire marketing name under which this smartphone will be sold.

Additional information was revealed by the popular Geekbench service, where performance tests of the upcoming Xiaomi Apollo model with model number Xiaomi M2007J3SG appeared. It was these tests that confirmed our existence in the prepared flag model and also pointed out some technical specifications.

However, the Xiaomi Apollo also impresses with its equipment. It will offer an eight-core powerful Qualcomm Snapdragon 865 processor and 8 GB of RAM, which are truly competitive values. The latest Android 10 operating system will also be available in terms of software.

At present, it is not clear which device it is and whether Xiaomi is actually working on a new device or will it be one of a pair of previously escaped models. Some leaks have proved to be false in the past, so we must also approach this information with some caution. 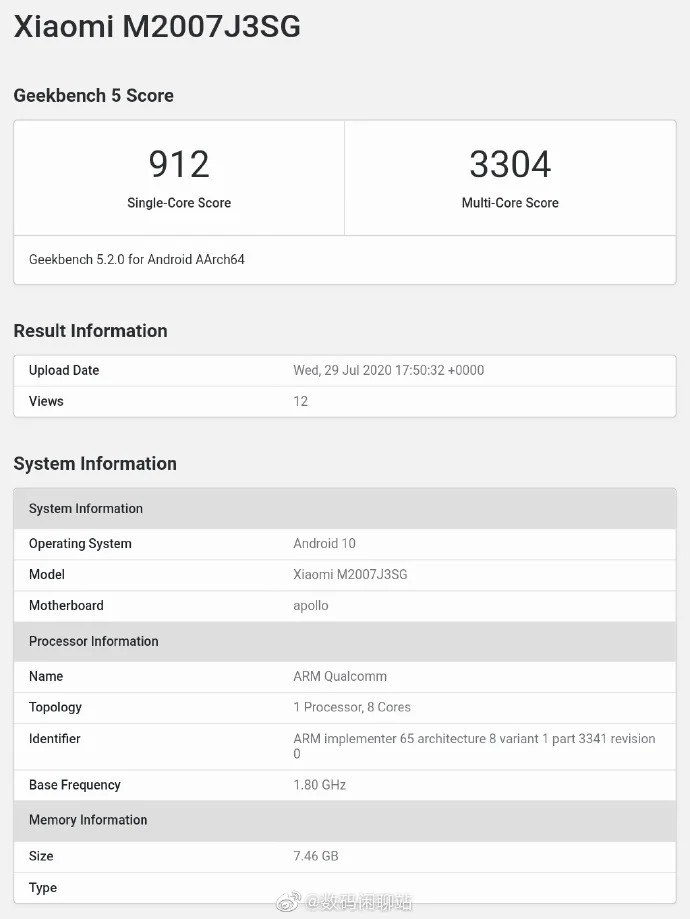 On the other hand, it is clear that the Chinese manufacturer is indeed preparing new performances of at least two high-performance devices. We can expect support for the Qualcomm flagship processor. However, the use of the competing MediaTek Dimensity 1000+ model is also at stake, for example in the upcoming Redmi smartphone.

We are curious what devices and with what technical specifications the Xiaomi and Redmi brands will finally officially present. Would you consider buying a new flagship smartphone or would you rather choose more affordable devices? You can easily write your observations and opinions to us below in the discussion below the article.

Xiaomi Mi 10 gets a new color in his home China. She looks stunning

Xiaomi and Qualcomm have developed a new Game Turbo mode for smartphones. Allows you to set up the GPU as on computers