smartphone Xiaomi Mi MIX 4 was introduced this month at the big summer Xiaomi conference. The first Xiaomi smartphone came with front selfie camera technology hidden under the display. However, it is currently only available for the domestic Chinese market. But that could change.

Further approval by the Bluetooth SIG

We recently informed you that both Xiaomi Mi MIX 4 smartphones and Mi Pad 5 tablets have appeared in Google Play Console, which could theoretically mean their arrival on the global market.

He has now received approval from the Bluetooth SIG. This means that the premiere must be close. The Chinese model designation of the Xiaomi Mi MIX 4 smartphone is 2106118C. It is this model that has been approved by the Bluetooth SIG. 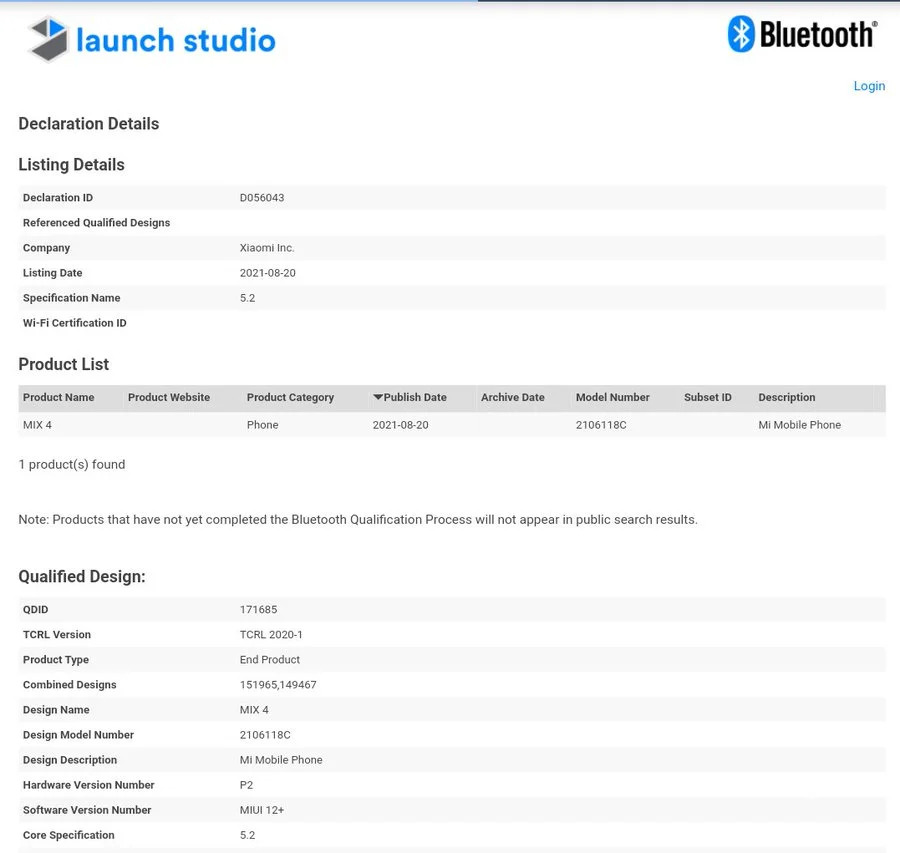 The list shows that your smartphone supports Bluetooth 5.2 technology. Certification does not necessarily mean the model enters the global market, but it cannot be ruled out. We would really like this model to reach the global market. The price would be increased by customs, VAT and shipping, but we would get the ultimate device from Xiaomi, which currently offers the best that the Chinese giant can produce.

We would also like to see it in the global market

As a reminder, the Xiaomi Mi MIX 4 smartphone has a beautiful unibody ceramic body that is durable and has a premium workmanship. It is powered by the latest Snapdragon 888 Plus processor. The front 20-megapixel selfie camera "stole" the most attention. It is hidden under the display and Xiaomi has been working on this smartphone for three years.

The Xiaomi Mi MIX series has always been revolutionary. We must not forget the first flexible smartphone Xiaomi Mi MIX Fold. Unfortunately, this also remained as an exclusivity for the domestic Chinese market.

Would you like the Xiaomi Mi MIX 4 smartphone to the global market as well? Or do you already have it pre-ordered? Let us know below in the comment below the article. Follow XiaomiPlanet, subscribe to news, and join our group on Facebook, where we create an active Xiaomi community for you.

The parameters of the Xiaomi Mi 11T Pro have reappeared on the Internet. This time with a preliminary price