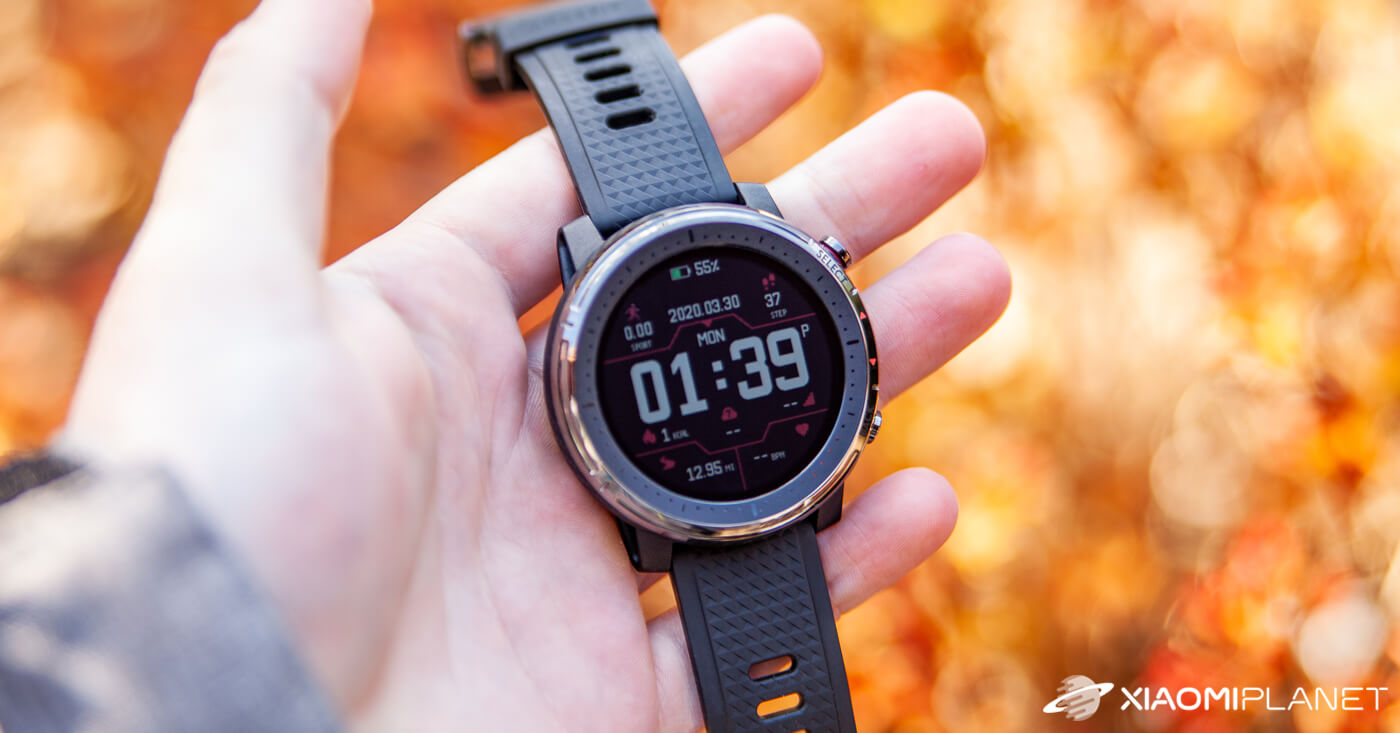 Fantastic visibility of the display in direct sunlight

They still do not support NFC payments in Europe

Smart watches from the company Amazfit have become popular mainly due to the excellent price / performance ratio. No less important is the Stratos series, which initially attracted a wide range of amateur athletes.

The third generation in a row with the designation Amazfit Stratos 3 again it brings very attractive equipment for a relatively low price.

We bought this watch through a well-known international seller from China, of course in the European version and we bring you a detailed review.

If you order a watch, you will be greeted first by a standard dark box with a picture of the watch or the Amazfit logo. The white pack, which is then ejected, is made of hard paper. 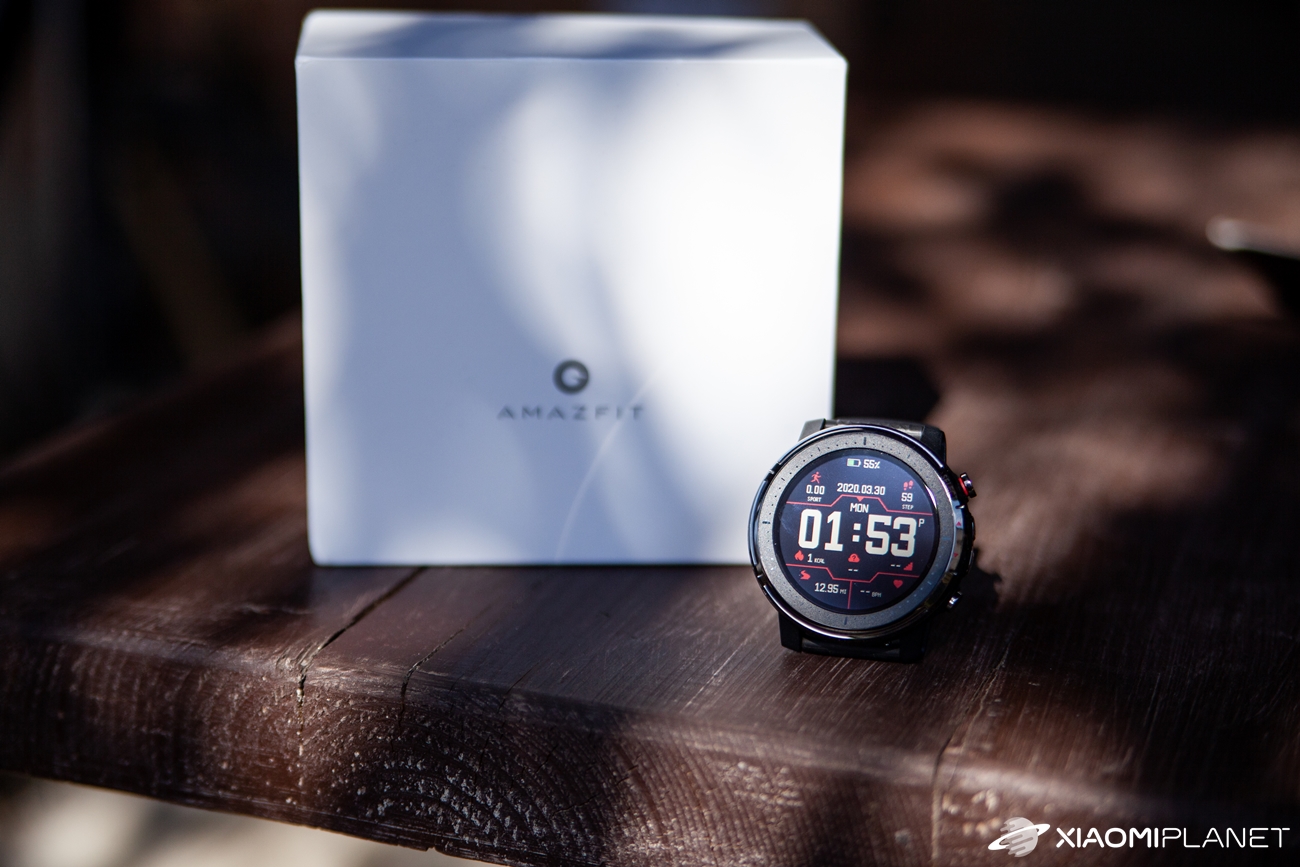 At the very top of the package, you will find the Amazfit Stratos 3 watch itself covered with a protective foil, directly with the enclosed silicone black strap. 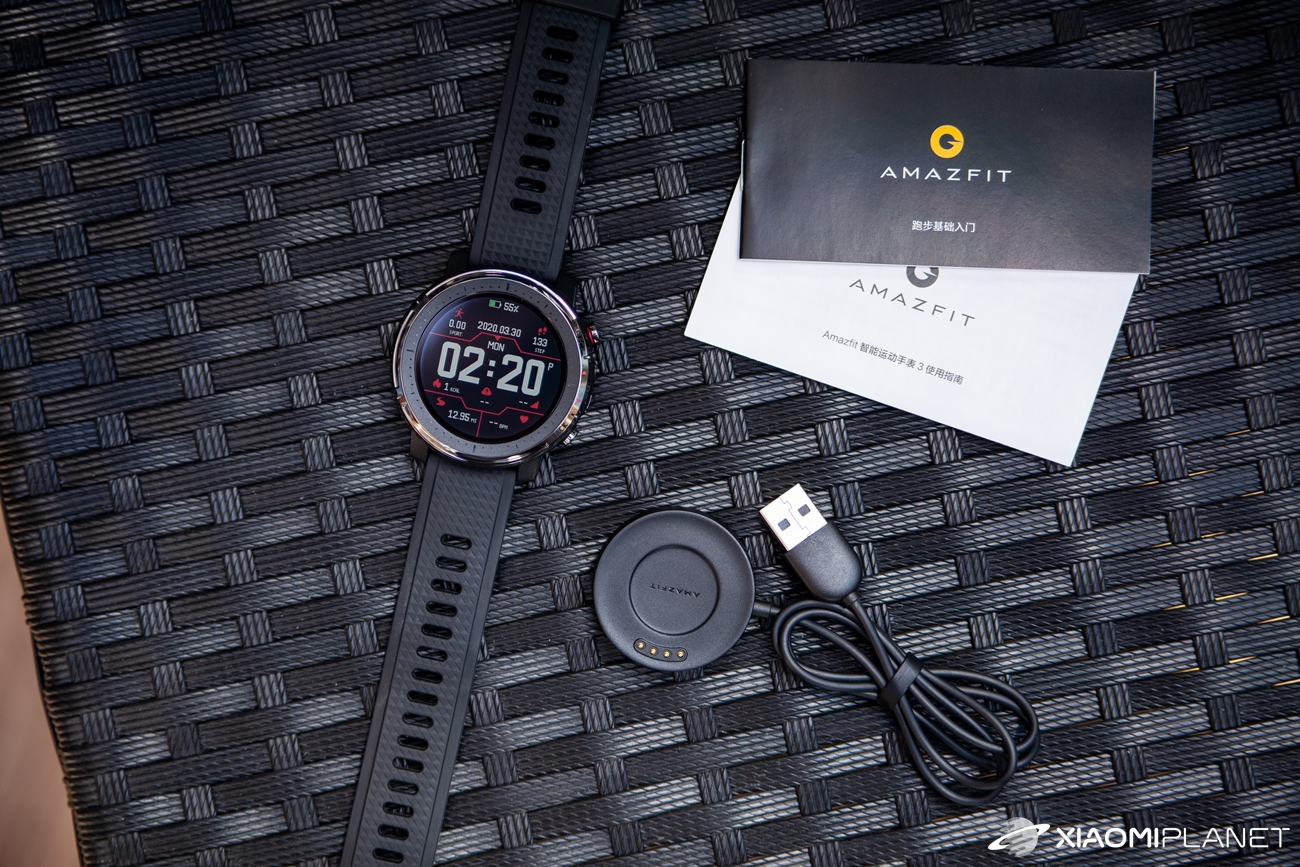 Below are two compartments, one for guidance and the other for a specific charger with a full USB-A terminal.

Quality workmanship will defend the price

The body of the watch is made of durable metal material with a typical kind of "carbon" design similar to the previous model Stratos 2. However, it does not look bad and it only underlines the powerful bodywork. 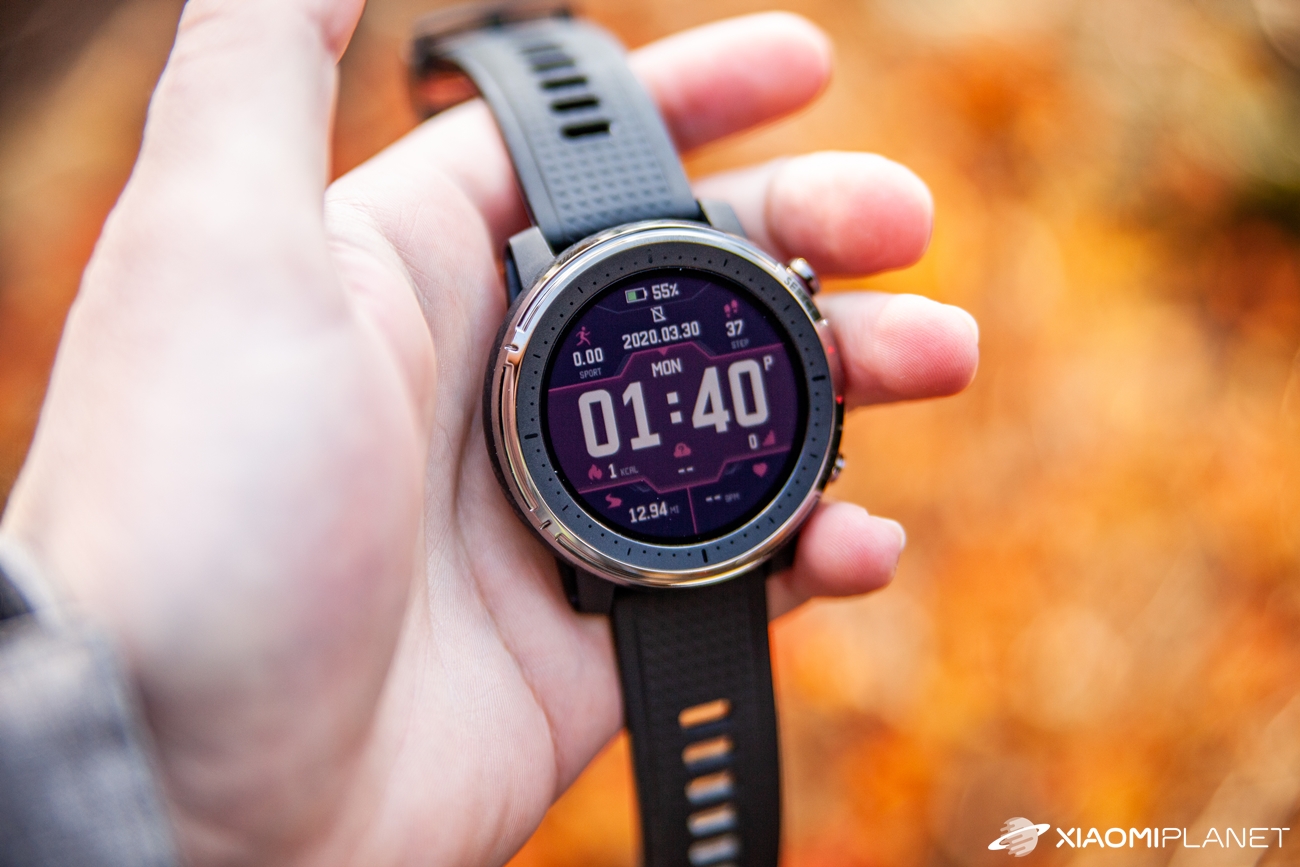 On the front there is a reflective display, which is a great attraction of this model, especially from the point of view of outdoor athletes.

Around the display is a relatively thick dial showing the hours and minutes, on the right side are located buttons for controlling the watch.

The upper and larger buttons are the SELECT buttons, below them are the two buttons for moving up and down in the menu, and below is the slightly larger BACK button for moving back in the watch menu. The buttons are also metal and contain a description of their functions. 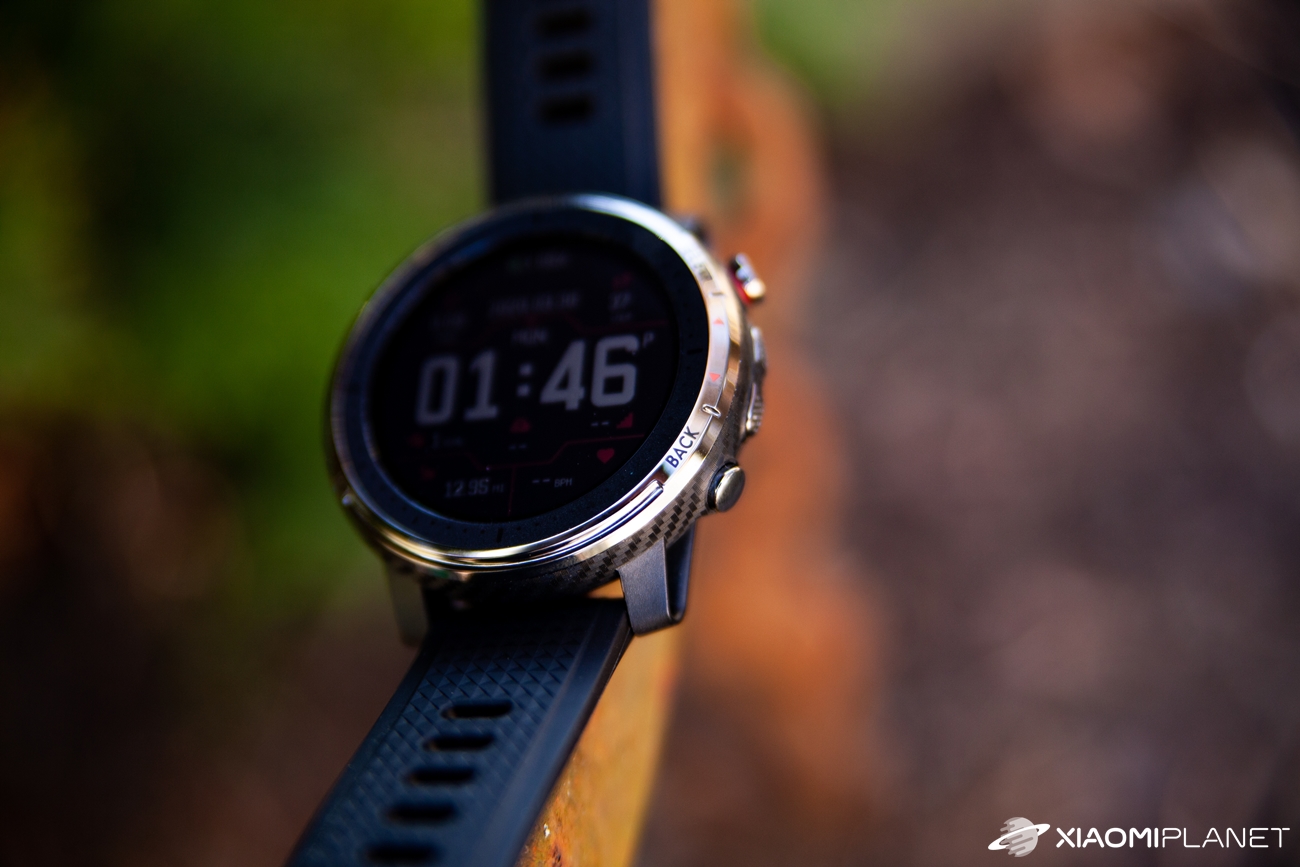 The left side is blank and the top and bottom edges contain a silicone strap holder. However, the handle is standard, so you can exchange the strap for any other in a given size of 22 mm, which you will like. 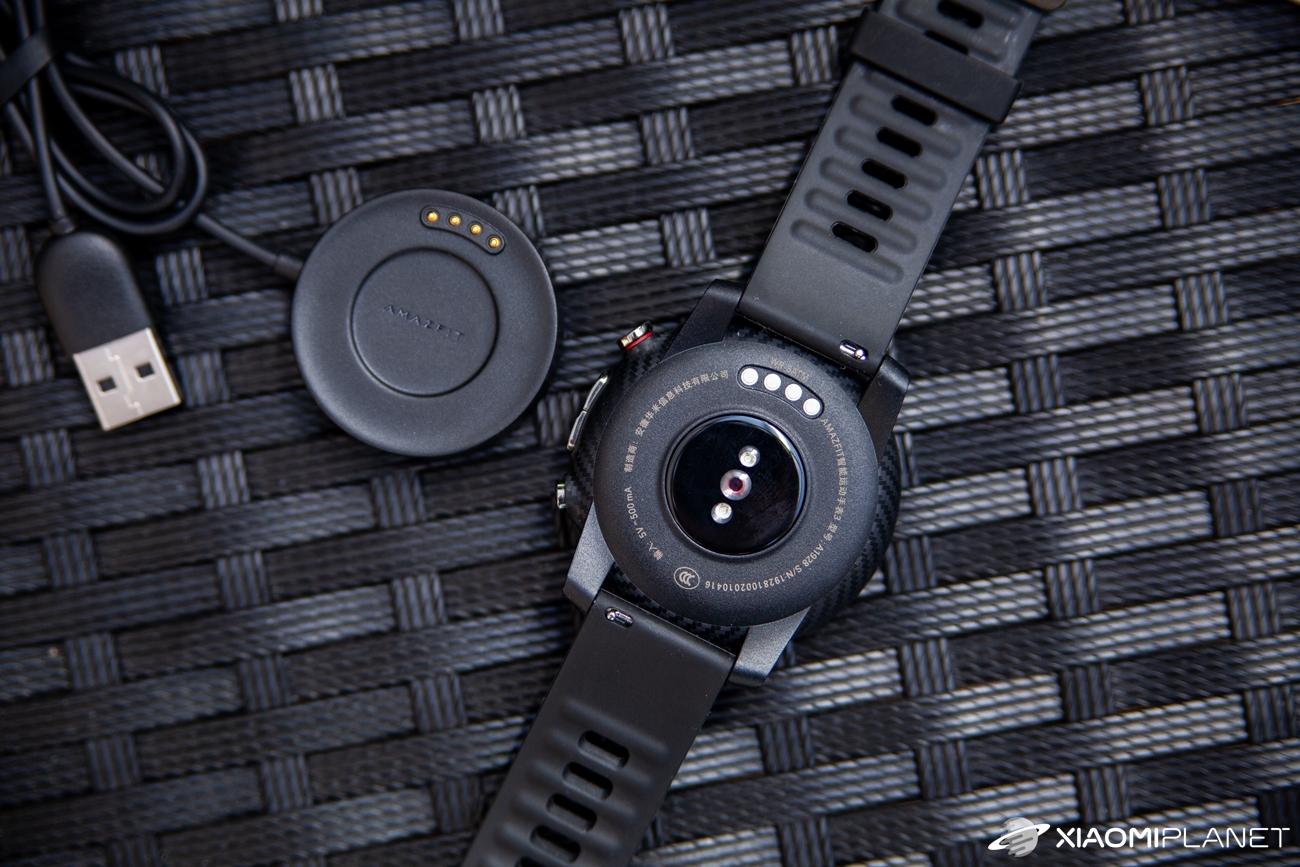 The underside contains connectors for the charger, but also a smooth glass part on which the sensor group is located. This is, for example, a heart rate sensor, which can be extremely important for the target group of watches.

Water resistance up to 5ATM

The width of the watch itself stopped at 48,6 mm, the thickness subsequently at 13,4 mm. The weight is then just over 40 grams (without the strap).

The manufacturer did not hesitate to work on the resistance of the watch. The mighty stainless steel body features 5ATM certification, which means the watch can handle submerging below 50 meters, which is definitely good news. 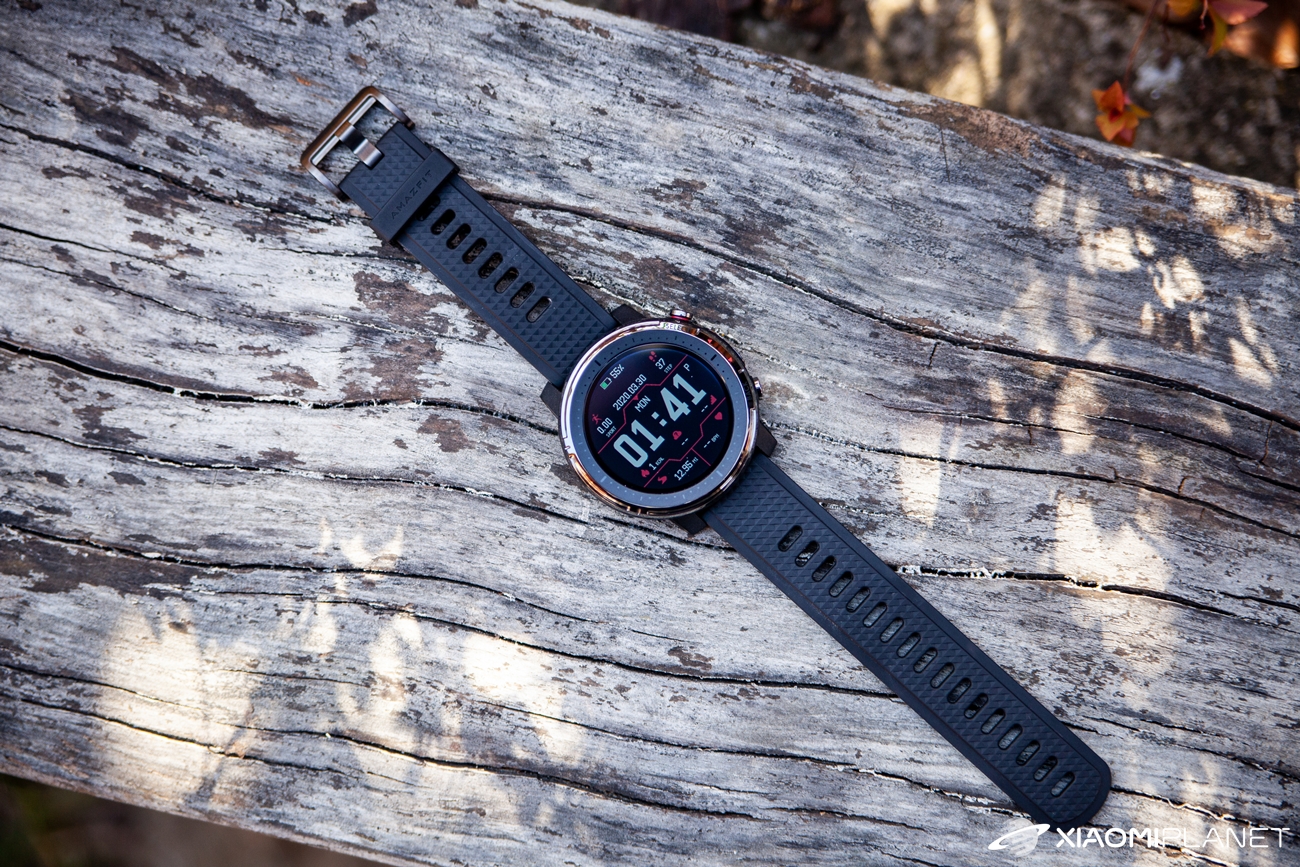 The construction of the watch itself is very strong, we are not worried about their quick damage and due to their price it is a really honest piece of metal accessories.

The reflective display is designed for the exterior

The manufacturer equipped this watch with a 1,34 ″ "Full Moon" display, which has a round shape and a resolution of 320 x 320 pixels. It is a reflective panel that will please especially outdoors in sunlight. 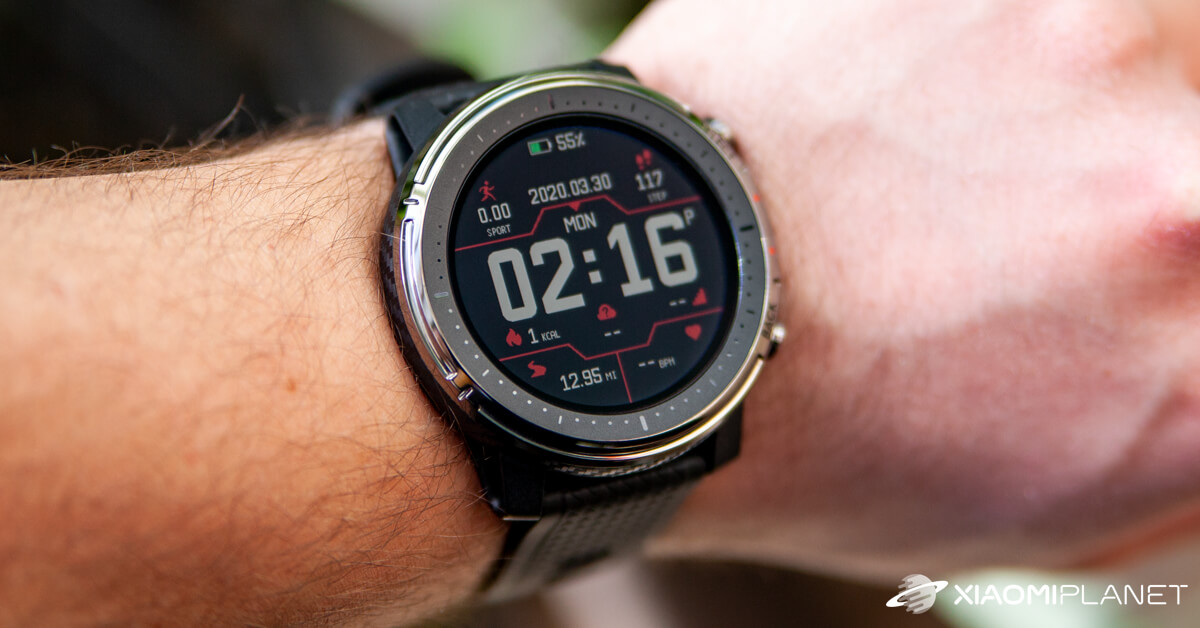 The reflective panel responds very well to direct sunlight. Although the display may seem a bit dark or lower brightness indoors, in direct sunlight the situation is exactly the opposite, the picture is clear and sharp, and all elements of the home screen are very legible. 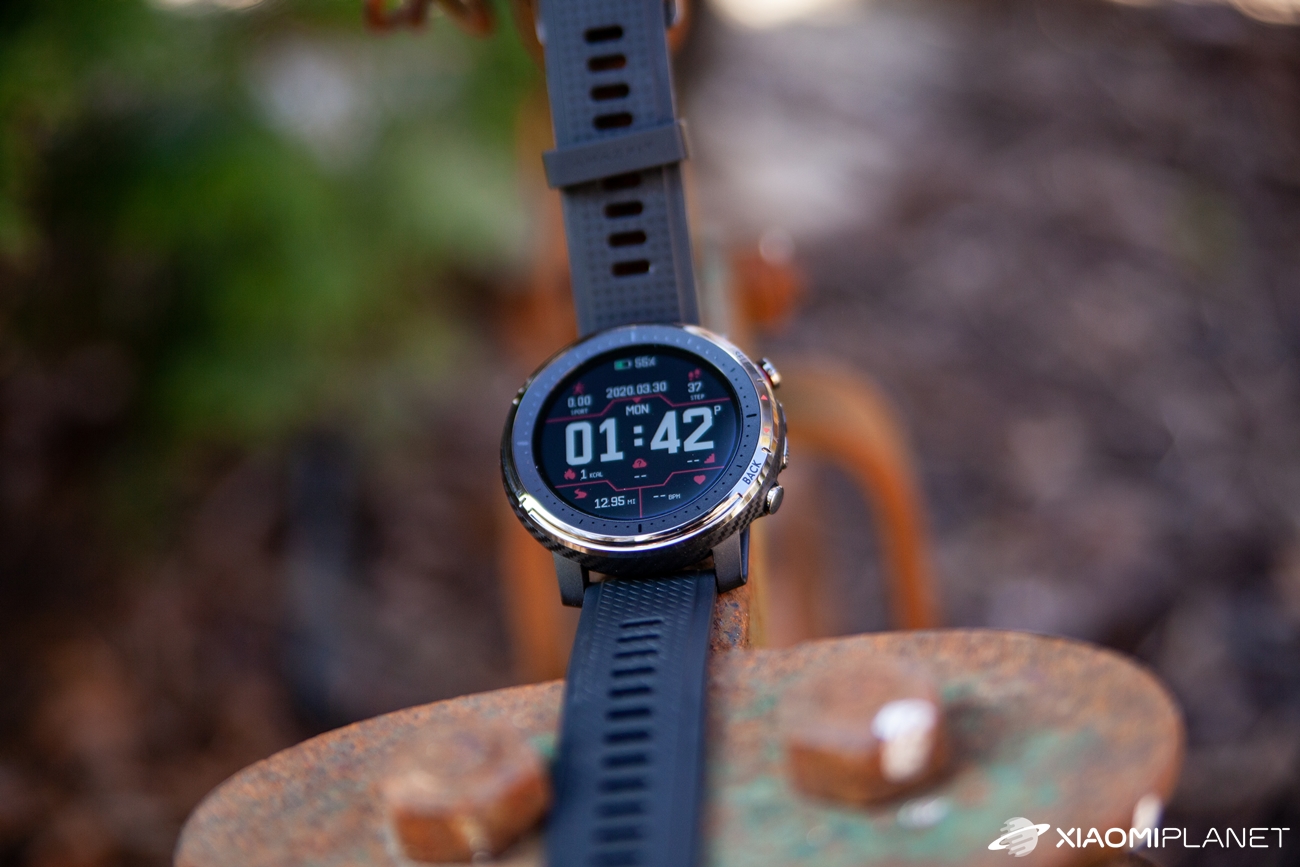 The panel used is not quite standard, but we are glad that the manufacturer built on such a version for the Stratos watch series.

On the other hand, the maximum brightness of the display does not reach the level of a quality AMOLED panel and the colors are much "faded". This is used for example in models Amazfit GTR or GTS.

If you want to connect a smart watch to a smartphone, you will need the well-known Amazfit application, which you can find for download in both the Play Store for Android and the App Store for iOS. 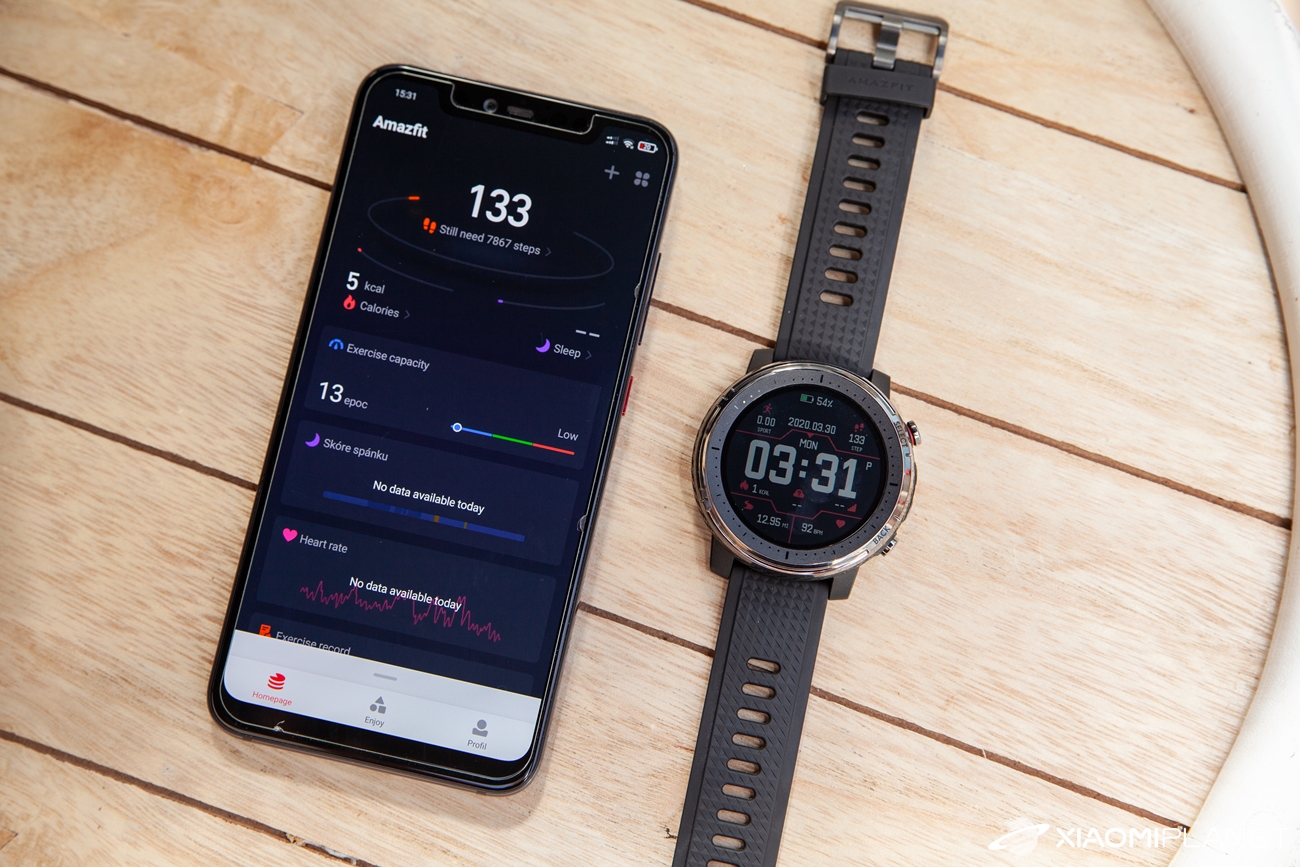 The watch notifies you to install the application the first time you turn it on. For subsequent synchronization, it is necessary to scan the QR code from the watch. The watch is connected to the application via Bluetooth 4.2 technology.

You can sign in to the app with a Xiaomi account or a Gmail or Facebook account. The popular application has a new design and a simple, clear environment, displays the current data collected by the watch and also the energy status of the watch.

There is a possibility to monitor the memory of the watch, but also settings. In them you can customize the individual arrangement of screens, respectively. "Widgets" on the watch.

During testing, we even received an update from the manufacturer. This is an update of Amazfit OS for Amazfit Stratos 3 to version code 4.2.3.0.

The update brings several new features, as well as support for a wider range of sports in Ultra mode (for better endurance), such as indoor cycling, climbing and swimming in the pool.

The massive design, the hardware itself, and the software point to the sports focus of the watch. This is also indicated by the number of monitoring functions that the watch offers. 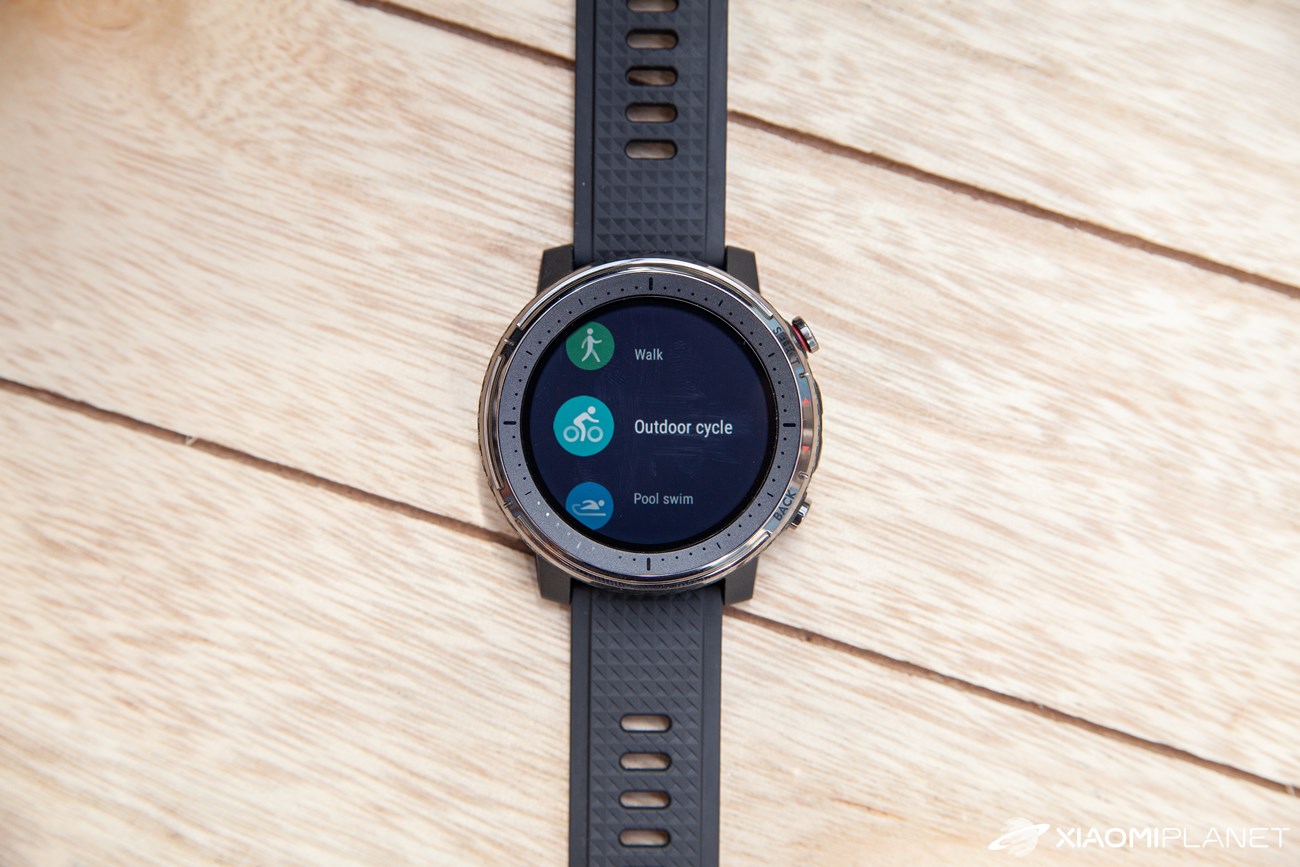 Support for a number of sports activities is also available from the factory. For each user there is running, walking, outdoor cycling, swimming in the pool, swimming in open water, running on a treadmill, stationary cycling indoors, exercise on a rowing machine, fitness exercises, hiking, climbing, triathlon, skiing, tennis, football, skipping rope and more.

You will also enjoy the "multisport" program, which records data from the current activity you are currently performing.

If you are used to the comfort of using Amazfit GTR or GTS models, their AMOLED display, wide viewing angles and the given controls, in this case you will have a subtle change. As such, the display is set to the factory dial with movement, time, date or weather data.

This is a relatively clear widget, which you can drag down to change to the current statistics and then to the heart rate measurement menu. The reverse movement will get you into the quick settings bar. 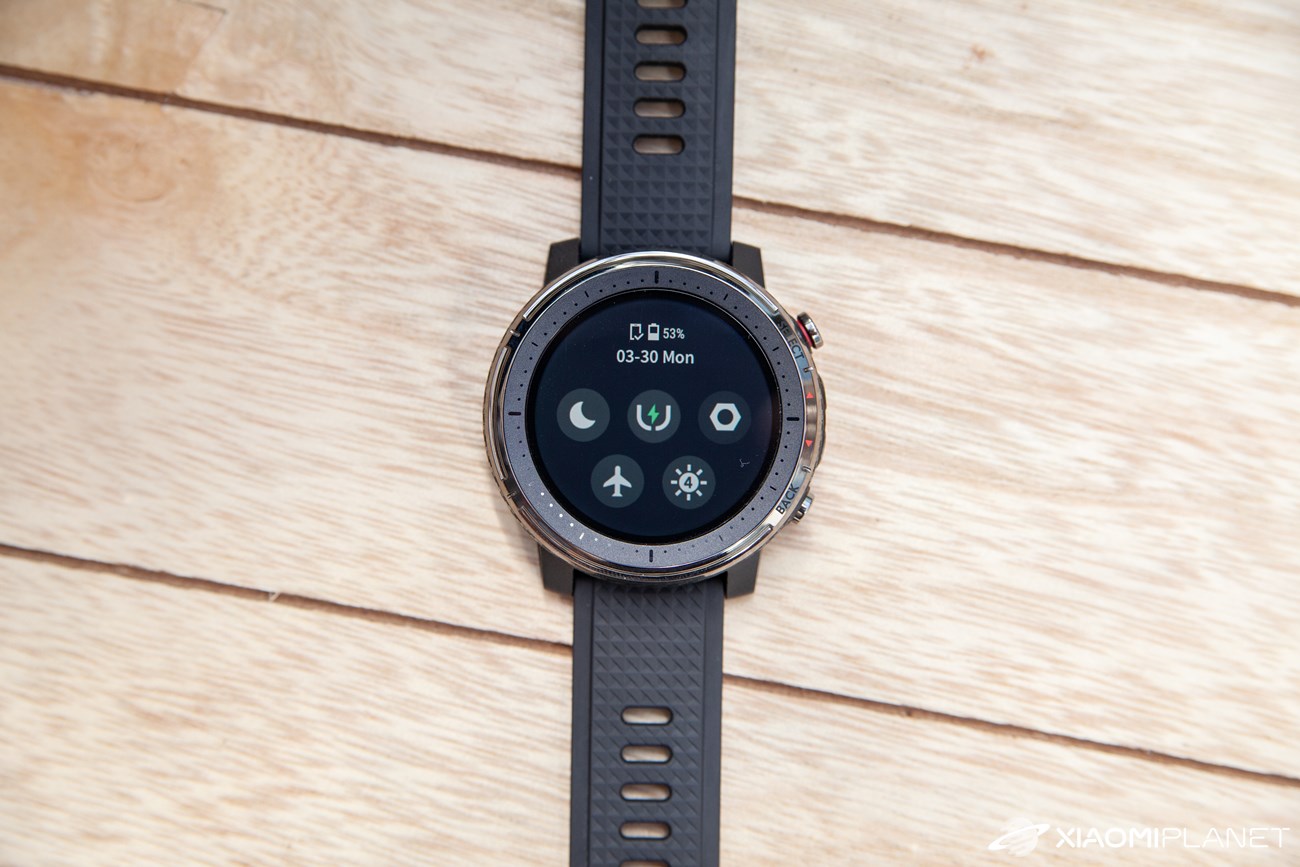 This bar offers brightness control, settings, battery status, and several other useful information. From the Home screen on the left you will see a music player with control and song title.

To the right is a menu with built-in apps and virtually all the services that the watch offers. There is a list of sports, weather, alarm clock, stopwatch, compass, phone service and more.

The list of sports is clear and it is possible to quickly start monitoring the activity from this offer. The watch offers a number of sensors such as a barometer, gyroscope, but also includes GPS.

Localization was fast and accurate, we didn't notice any problems with use. Operating the system using the side hardware buttons also worked just as well.

This is what it looks like in the watch menu:

Sports activity even without a smartphone

We did not miss the test of sports activity recording, which is the primary function of the Amazfit Stratos watch. In our case it was an outdoor cycling, which we also chose on the watch.

After you select a sporting activity, the start screen will appear, showing the GPS location and making the last settings. We were on the street between the family houses and the GPS position started after about 1 minute. Then you just start the activity and the watch starts recording.

After completing the activity, they will show you complete statistics, such as average speed, climb, heart rate data, but also calories burned or VO2 Max. These data are displayed directly on the display in the watch and stored.

In addition, they are synchronized with the Amazfit application, in which you can then monitor all statistics. The Amazfit app also offers a link to the well-known Food app, where data can be synced.

Play music directly from your watch

A big advantage for many athletes will be the fact that you do not need to wear a smartphone during a sports activity with this watch. Since the watch has its own GPS, it can record the route independently of the smartphone.

Even better, the watch has approximately 2 GB of internal memory available to store your favorite songs. They support the connection of Bluetooth headphones, so if you like listening to music during training, you won't lose that option. Of course, it also works without the need for a smartphone.

The battery lasts at least a week

The battery life is stable due to the functions and capabilities of the watch. The manufacturer equipped the Stratos 3 Li-Po model with a battery with a capacity of 300 mAh.

According to the manufacturer, this battery is sufficient for up to 7 days of standard use. Compared to the GTR or GTS models (approx. 25 days per charge), however, the endurance is significantly weaker.

We have seen a battery life of up to approximately 9-10 days (32% battery in 3 working days) while sending all notifications from the smartphone to the watch, measuring the heart rate manually and also manually monitoring sports activity as needed .

With regular daily sport activity for 1 hour with GPS on, the watch lasts about 5 days.

However, the watch also received a saving mode from the manufacturer. The ultra mode with which this watch lasts up to approximately 14 days. Conversely, battery life will be shorter when using GPS technology.

Final rating: Not only for athletes

Amazfit Stratos 3 is a watch designed especially for amateur athletes. Even the average user can appreciate a well-worked body, simple system or unusual reflective display, which is very easy to read in direct sunlight. 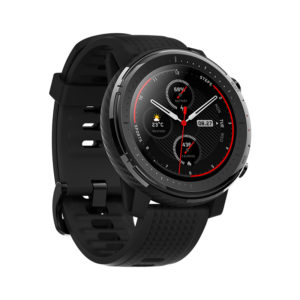 I want it
Close
Current price:  €0  more expensive than average
Do you shop for the first time at Aliexpress? See instructions!

Aliexpress Standard Shipping is available for this product. It is the most convenient method of delivery, which takes place without customs duties and in most cases is delivered by a courier company. Delivery time is usually 10-20 days.

Quick video tutorial: How to combine several coupons at once on Aliexpress and save as much as possible?

On the other hand, if you expect AMOLED display quality and modern design pieces, we recommend you to choose one of the sister models with the name Amazfit GTR or GTS.

VIDEO: Xiaomi disassembled the flagship Mi 10. This is what the most expensive smartphone looks like from the inside

We test the DHgate shopping platform: Famous prices, lower than on Aliexpress, Banggoode or Gearbeste