Redmi Note 9S Review: Significant surprise priced at up to € 200

smartphone Redmi Notes 9S brings with its equipment a very interesting price / performance ratio. It offers not only a large 6,67 ″ IPS panel, but also a modern shot in the display. It is a smartphone that was previously introduced on the Indian market under the name Note 9 Pro.

But don't be fooled, the Note 9 Pro sold in Slovakia is again the originally introduced Note 9 Pro Max.

So our review will introduce you to the global version of the Redmi Note 9S smartphone, which is designed for Europe.

Here we bought the Redmi Note 9S
⚡ Use coupon: GBREDMIN9S123

The package that comes to you shows the design and also the name of the smartphone. After unpacking, a paper envelope with accessories is available.

These accessories include a needle for extended SIM card or memory card slots, a silicone case to protect the device, and a quick start guide. 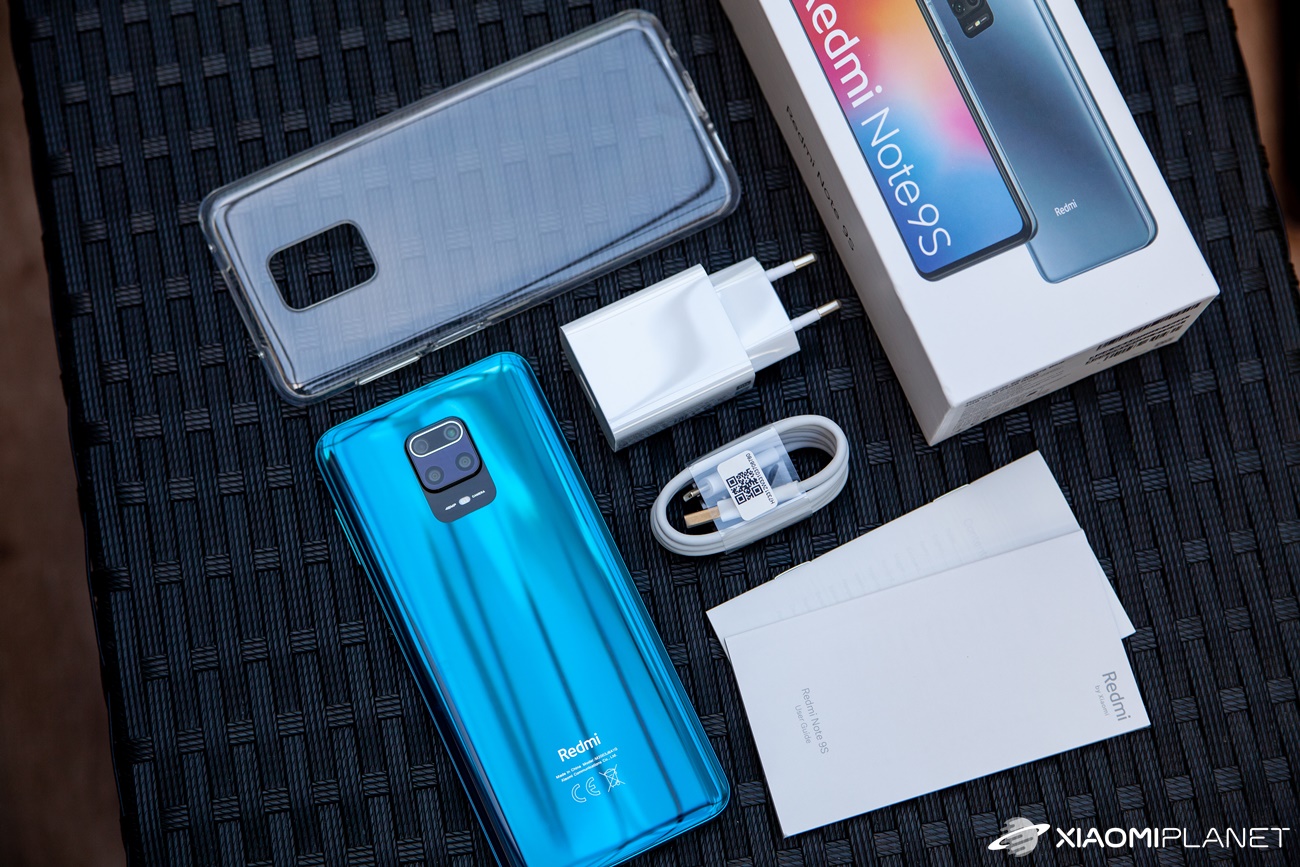 In case the packaged packaging does not suit you, there are various ones available covers on Xiaomi. Below you will find the smartphone itself wrapped in a protective foil, charging cables with a USB type C terminal and a European charger terminal.

The phone also supports fast 18W charging. The fast charger is directly integrated in the package and has a power of 22,5W.

The construction has a premium effect

It's no secret that cheaper Redmi smartphones in particular often contained numerous plastic elements, and at the first touch it was quite strongly felt that it was a cheaper smartphone, regardless of its excellent equipment.

This time, however, the situation does not repeat itself, the Redmi Note 9S smartphone is processed really premium and the metal body is complemented by a glass front and back wall, which is made of tempered glass.

A slight disadvantage is the higher thickness and weight of the device. The dimensions were stopped at 165.8 x 76.7 x 8.8 mm, the weight is 209 grams. Also an atypical element is the protruding module of the rear camera, which is square.

The fingerprint sensor is not integrated in the display, on the contrary, there is a modern shot in the middle of the upper part of the screen, which contains the front camera. 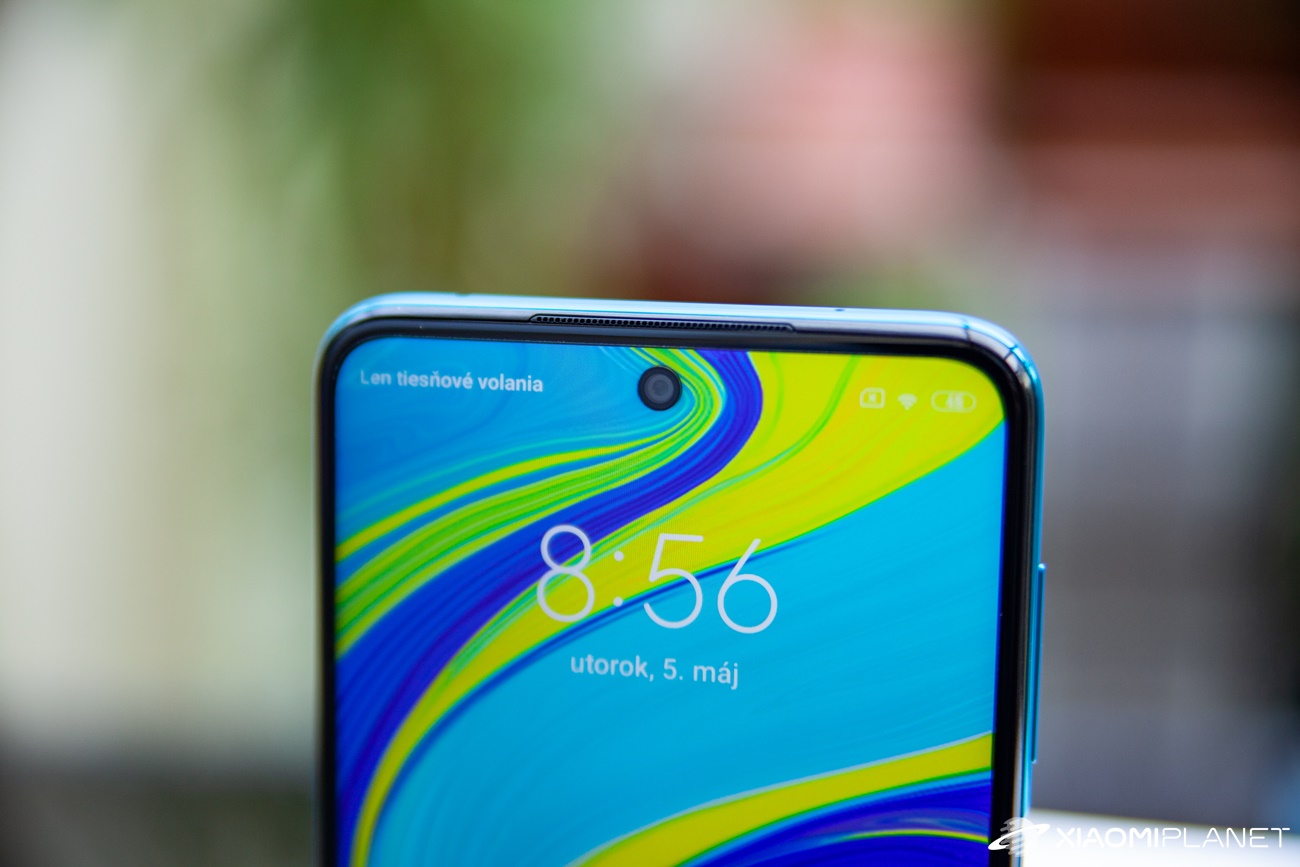 The upper edge contains an infrared sensor that can be used to control home electronics. It is a really practical element, which is complemented by the relevant software. There is also a secondary microphone on this edge, intended for video recording, for example.

The bottom edge contains a 3,5 mm audio connector, which will please especially fans of traditional headphones. There is also a USB type C connector for fast charging or connection to a computer.

There is also a primary microphone for telephony and a loudspeaker. He is really loud, but the quality is average.

The left side contains a minimum of controls. There is only a slot for inserting a pair of nanoSIM cards (Dual Stand-By), there is also a dedicated slot for a microSDXC memory card, which can be used to expand the internal storage. 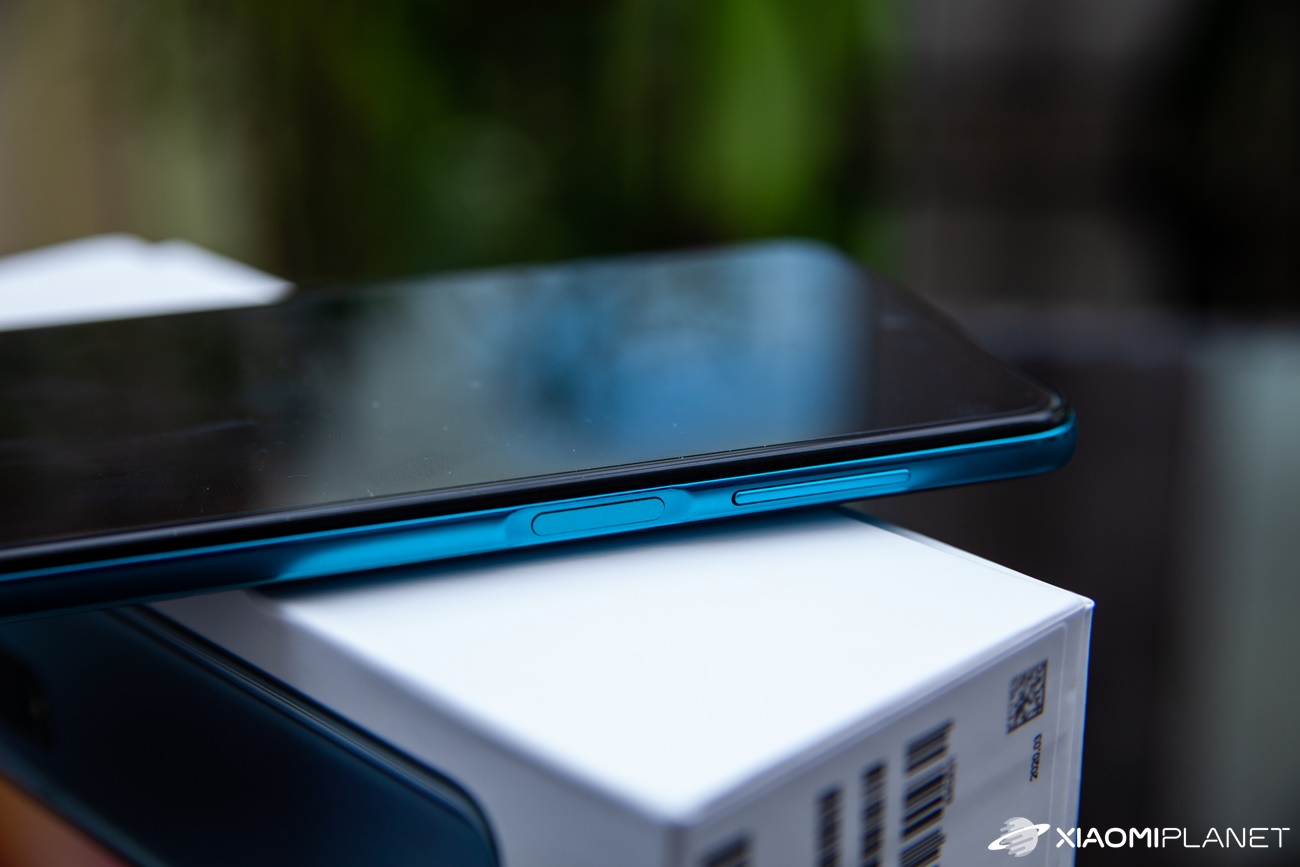 However, it had to give way to a slightly unconventional element. The wider on / off button also hides the fingerprint reader. It is made really well and is conveniently located.

The back contains a protruding module of four rear cameras. These cameras are placed symmetrically in the shape of a square. Below the module there is information about 48 MPx resolution and LED flash. Furthermore, this page only contains the Redmi logo and mandatory recycling information. 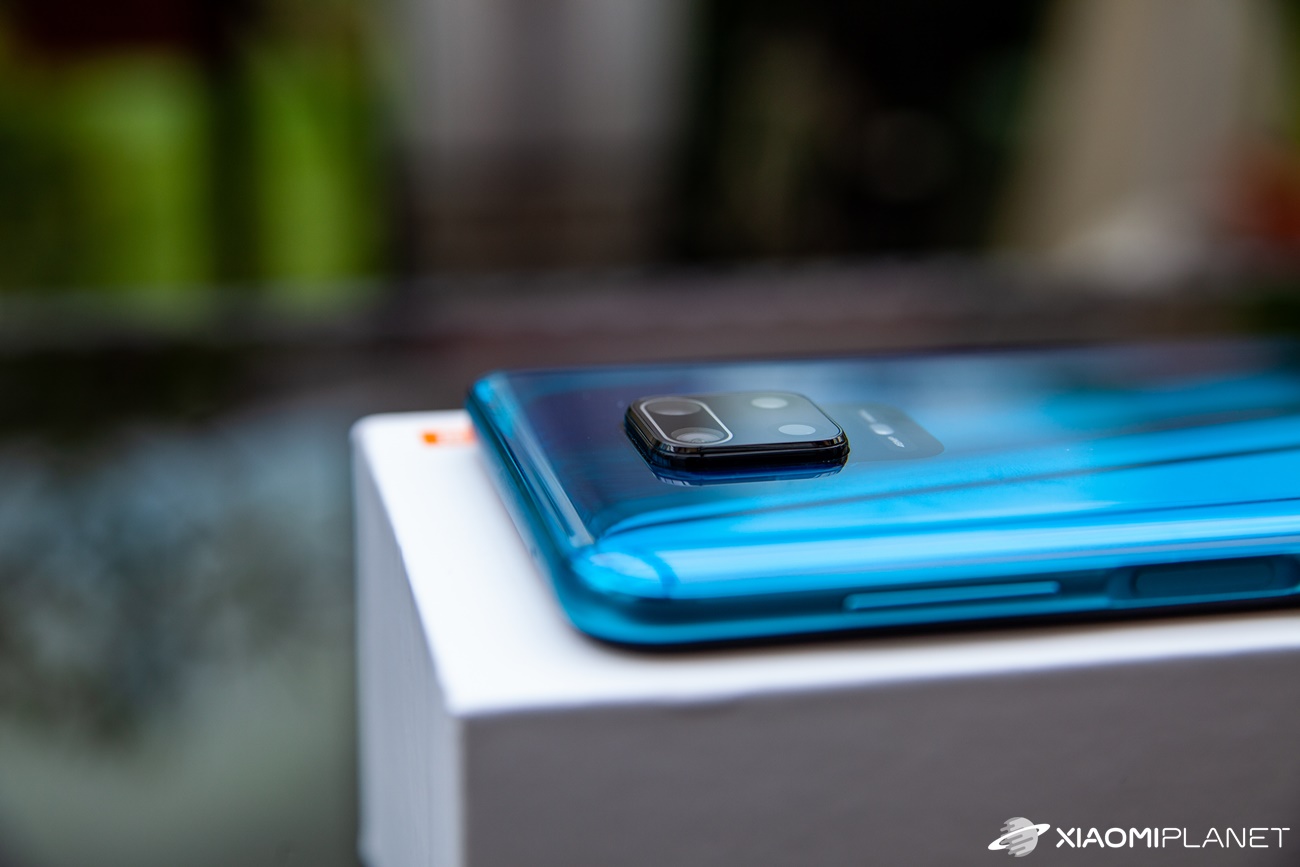 The surface finish of the back wall is gradient and its color changes according to the incident light. It is an effective tool, but it is a shiny wall that significantly captures fingerprints and grease. 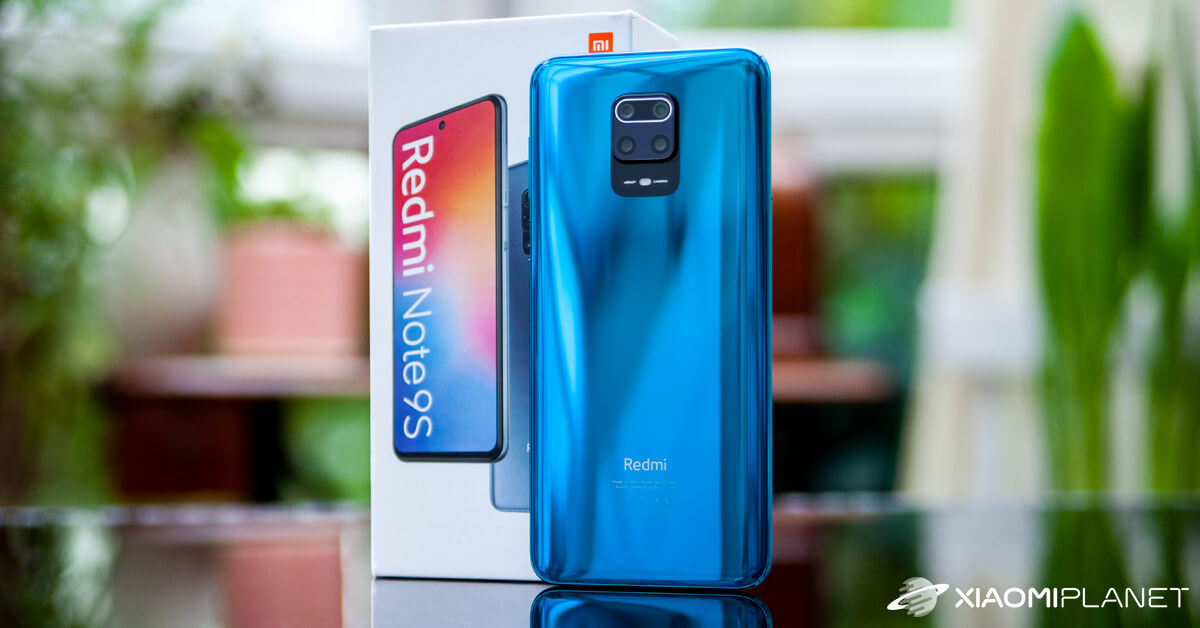 The solution to this problem, as well as to the protruding camera module, can be to use a protective cover that is included directly in the package.

The display is covered with Corning Gorilla Glass 5 protective glass, it does not lack HDR 10 technology and can achieve a brightness of 450 rivets.

Following the example of competing IPS panels, this piece also offers very good viewing angles and readability under standard conditions. The range in the display is quite wide, but it is not a very distracting element. 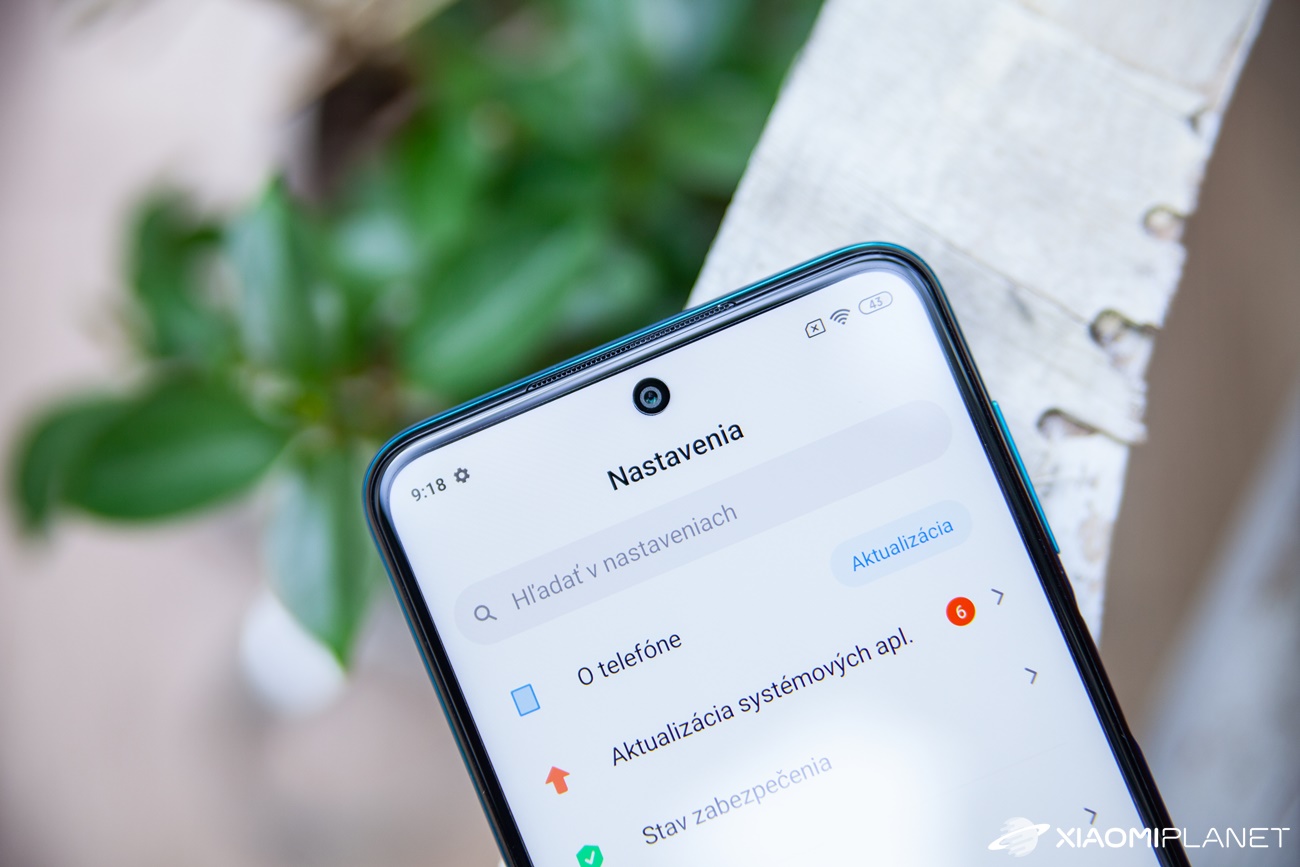 However, the colors of this panel seemed a bit dull or too cold. Fortunately, the color spectrum can be corrected in the smartphone settings.

However, what can no longer be corrected is the brightness of the display. The minimum brightness is fine and the smartphone could be used without any problems even in complete darkness.

However, the smartphone would deserve a slightly higher maximum brightness. The problem with readability occurred mainly in the exterior and in direct sunlight. Automatic brightness worked quickly and reliably.

In terms of performance, the smartphone is equipped with an eight-core Qualcomm Snapdragon 720G processor, which is manufactured using 8nm technology. The processor contains cores in the ratio 2 x 2,3 GHz Kryo 465 Gold + 6 x 1,8 GHz Kryo 465 Silver.

The processor itself is complemented by the Adreno 618 graphics accelerator. It is also a very important element that weighs in the overall impression of use. The smartphone in our hands responded quickly, we did not notice any slowed down reactions, even during the installation of updates.

There was no problem with this performance package when playing mobile games from the Play Store. For more graphically demanding 3D titles, the gaming experience was also very good. For some titles, it was necessary to slightly reduce the level of graphic details.

If you want to compare the performance of this smartphone with yours, AnTuTu tests can help. You can see their results in the photos above.

We didn't see any problems with RAM. This is mainly due to the advantageous control of background applications by the MIUI software extension. It controls and, if necessary, closes applications in the background so that their operation does not affect the smooth use of the smartphone.

Android requires approximately 15,5 GB of free space the first time you turn on your smartphone. After installing several dozen applications and taking about 50 photos, we still have a little more than 40 GB of free storage.

For a simpler user, a version with 64 GB of storage will suffice. In addition, there is a slot for a microSDXC memory card, which can be used to expand the storage. However, if you think that even this is not enough for you, a version with double capacity at the level of 128 GB is also available.

Fingerprint reader: In the side edge

We mentioned the unconventional elements of the device. It is in this category that the location of the fingerprint reader falls. It is located in the right side edge, it is integrated into the button designed to turn the device on or off.

The setting of the reader is relatively fast, its longitudinal shape compensates for the smaller width compared to other readers, and also the matt finish is very well solved. The placement is suitable, the problem should not occur even with a smaller hand size.

The reader sensor responded very quickly, comparable to the standard reader models that were placed on the back of the smartphone in previous generations. The problem occurred only with increased moisture or grease of the fingers, in which case the experiment had to be repeated.

Improving this situation can be re-recording the same fingerprint via the smartphone settings. Recognition was noticeably more secure and faster. However, given the price of the device, there is really nothing to blame, it is a successful and fast sensor.

The smartphone contains pre-installed software in the form of the Android 10 operating system. During the testing, we even received a security update. The phone is fully equipped and also includes a May security package directly from Google.

The system is up-to-date and, in cooperation with the manufacturer Xiaomi, full-fledged support is available, which is really admirable given the price of the smartphone.

In addition, a Digital Balance feature is available. It monitors the use of the smartphone, generates statistics and allows you to set rules for the use of individual functions or applications.

In addition to the operating system, a massive graphical superstructure from Xiaomi is traditionally available, specifically in the version called MIUI Global 11.0.8.0 Stable version.

There are features such as dark mode, new font, ringtones and the manufacturer also guarantees an update to the upcoming and already mentioned version of MIUI 12, which will bring further improvements.

The photographic features of a smartphone are important even in such a low price category. In this case, the main 26 mm sensor will offer a resolution of 48 MPx (f / 1.8), which the manufacturer also boasted about on the rear wall of the device.

There is no lack of LED flash for possible illumination of the scene, HDR or panorama. Night mode is part of the well-known Camera application from Xiaomi. This time, too, the night mode did not disappoint and helps significantly, especially in poor lighting.

The quality of the photos was very good due to the price of the smartphone. In daylight, the camera offered true colors (if you're viewing photos on your smartphone's display, we recommend adjusting the color rendering in your smartphone's settings), enough depth of field, but only double the zoom.

Surprisingly, photos from an ultra-wide angle camera were also usable. It is not customary to watch good widescreen photos in a given price category.

There is no possibility of shooting up to 4K (30 fps) video, the front camera is located in a modern space in the display and its resolution is 16 MPx (f / 2.5). Its results were also very satisfactory even without adjustments.

In terms of connectivity, fans of standard wired headphones will find something to their liking. The phone still offers a 3,5 mm audio connector or a built-in FM radio. Also positive is the type C USB connector with USB OTG support and fast charging. 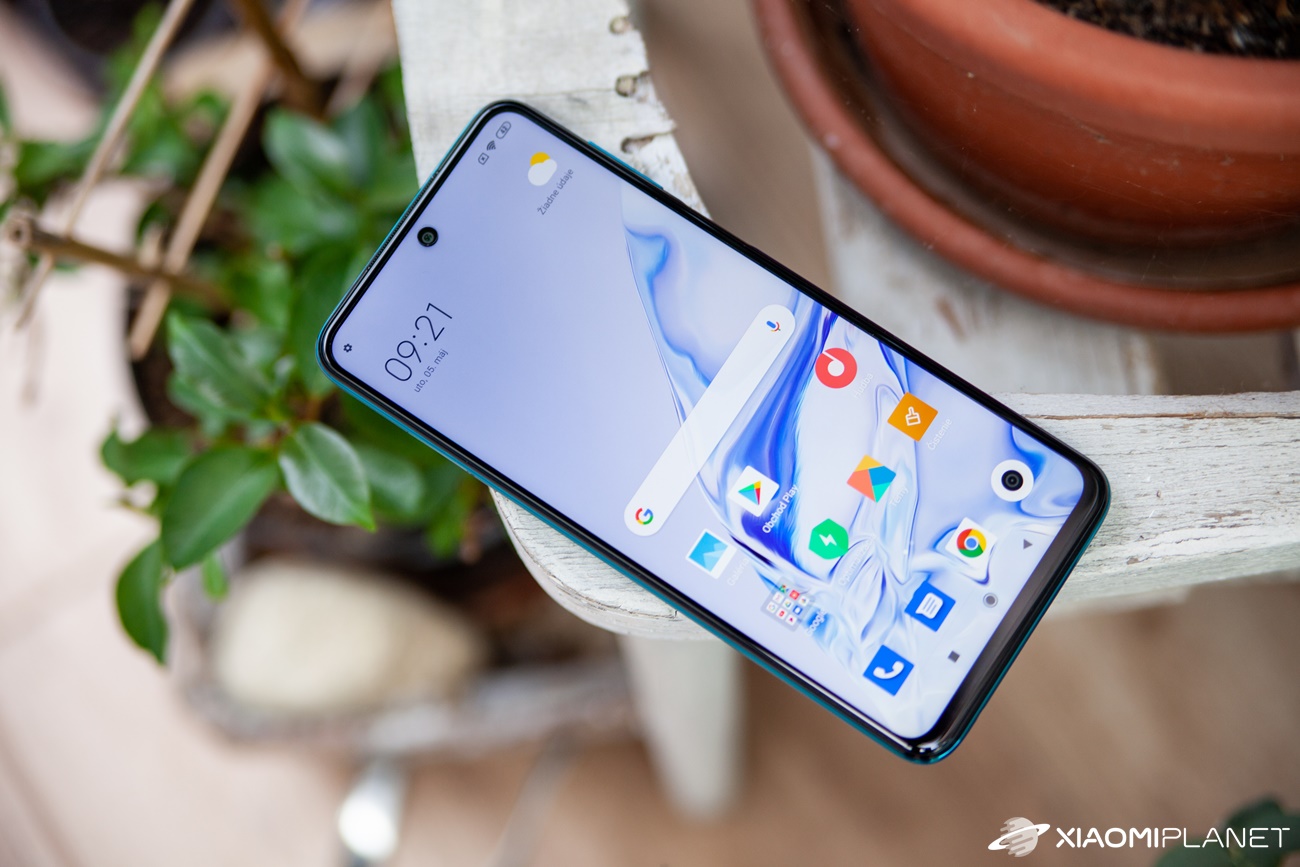 The connection is solved using dual Wi-Fi 802.11 a / b / g / n / ac, using Wi-FI Direct technology and the possibility of creating a hotspot. It will also please Bluetooth 5.0 LE with A2DP support. There is no NFC chip for making contactless payments.

GPS, A-GPS, Glonass, Galileo and BDS technology are also available. A pleasant and practical element is the mentioned infrared port, which is used, for example, to control home electronics. The media sensors that the smartphone contains include a compass, accelerometer, gyroscope or proximity sensor.

The smartphone has a truly above-standard battery with a capacity of 5020 mAh. In addition to the high capacity, the smartphone also supports fast 18W charging, which is really great news in this price category.

In terms of energy consumption, the MIUI is a really gentle superstructure. With standard use, we had no problem achieving 2 days of endurance on one charge, resp. even more than 7 hours of on display.

Standard use in our case included active use of social networks, hourly watching of Full HD videos, hourly writing of documents, hourly telephony and occasional gaming.

In addition, the high-capacity battery is charged relatively quickly. It charges to 100% in about 90 minutes thanks to the fast charger.

Model Redmi Notes 9S in its price category it offers really very good equipment and high battery capacity. If you are looking for a smartphone up to 200 euros, this is really a very good alternative.

Here we bought the Redmi Note 9S
⚡ Use coupon: GBREDMIN9S123

It will please the accessories and good photographic properties, on the other hand, the absence of an NFC chip does not allow you to pay by mobile phone, for example via Google Pay.

The Redmi 10X gets a special vibration motor, a large battery and IP53 water resistance

The mysterious Poco M2 Pro has passed the certification. It looks like another renamed smartphone presented by Xiaomi