You will definitely get to know the popular budget family Redmi Note. Smartphones from this series have become popular thanks to their excellent price-performance ratio, with each successor setting the bar even higher.

Other smartphone-related news has recently appeared Redmi Note 10. It is thus a direct successor to the popular Redmi Note 9, however, the phone with the serial number 10 will bring some fundamental changes.

Redmi Note 10 will be exceptional

We won't strain you unnecessarily, we don't know much about the Note 10 yet. His impending arrival was only easily hinted at by Redmi CEO Lu Weibing, who sparked a debate on Redmi Note 10 in a recent post on the Weibo social network. 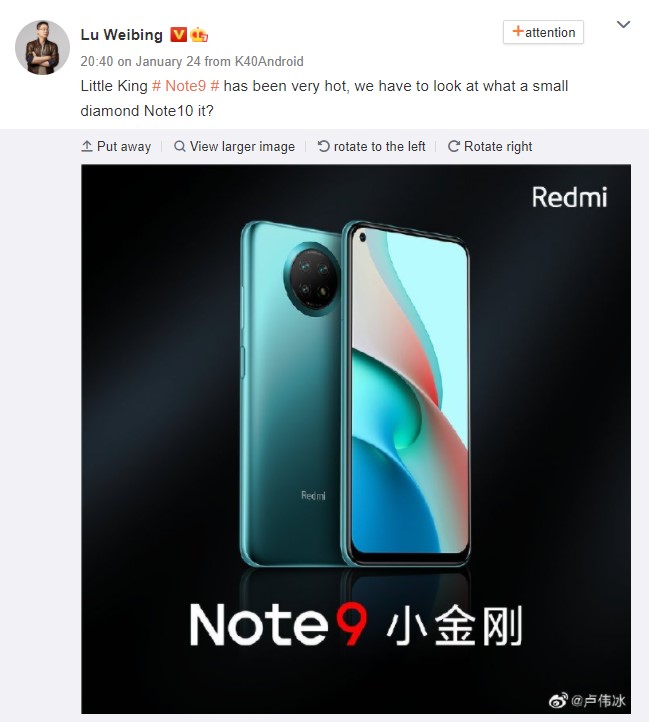 No equipment details have been revealed yet. Thanks to earlier leaks and speculation, however, we assume that the equipment will actually be packed to the given class. We start from the annual tenth model, which should be exceptional for the manufacturer.

As we mentioned, there was a lot of debate between CEO Reds and fans under this post. One of them wrote a comment below the post, referring to the removal of the charging adapter from the package of the smartphone, while Lu replied that he took note of the request.

So we will probably see the removal of the charger from the packaging of the smartphone, following the example of the American Apple or the Mi 11 model. A similar scenario will not be repeated only with the Redmi Note 10, but also Redmi K40.

If we take into account several predecessors from the Note series, we find that the time difference between the individual models is about half a year. Redmi Note 9 was launched in May 2020, so the successor will definitely not have to wait long.

Of course, we will continue to monitor the whole situation and bring all the important news. In the discussion below the article, write to us whether you prefer to remove adapters in order to solve major environmental problems or not to give up your basic equipment.

For other interesting things, not only from the world of mobile technologies, regularly read interesting articles on our website Xiaomi Planet, join our new facebook group and subscribe to our newsletter below the article.

This is the Redmi K40 package. The charger will also be an optional accessory for this model

Kugoo S1 is the best cheap scooter for Europe. She received a new coupon with a price of only € 226