Amazfit GTR 3, GTR 3 Pro and GTS 3 at the best coupon prices in the EU

Are you a fan of smart watches? In that case, we have great news for you. Chinese company Amazfit, as a subsidiary of Chinese Xiaomi, brings a new series of smart watches. This is news Amazfit GTS 3, GTR 3 a GTR 3 Pro.

Amazfit officially launches world premiere of its best model of Amazfit GTR 3 Pro smart watch to date. The sale takes place through the official store of the brand on the well-known Aliexpress platform.

The watch is even available in Spanish warehouse if available at a stock price. The advantage is free shipping and express delivery within 7 days. Of course, this is the official global version of the watch for Europe. 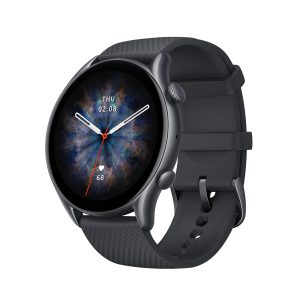 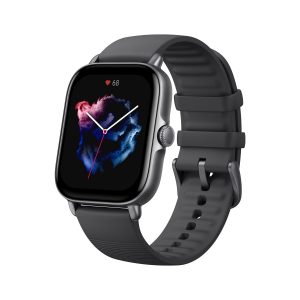 Round construction Amazonfit GTR 3 Pro It is made of aviation aluminum and weighs only 32 grams. Two versions will go on sale - Brown Leather with a light body (with a leather strap) and Infinite Black with a black body (and a silicone strap).

The watch has a larger 1,45 ″ AMOLED display with a rounded protective glass. It has a fineness of 331 ppi and a high brightness of up to 1000 rivets. Thanks to the thin frames (70,6% of the front wall is occupied by the display), the watch has the same size as the standard GTR 3 model (with a smaller 1,39 ″ panel). The screen refresh rate has also increased, by up to 67%, according to the manufacturer. 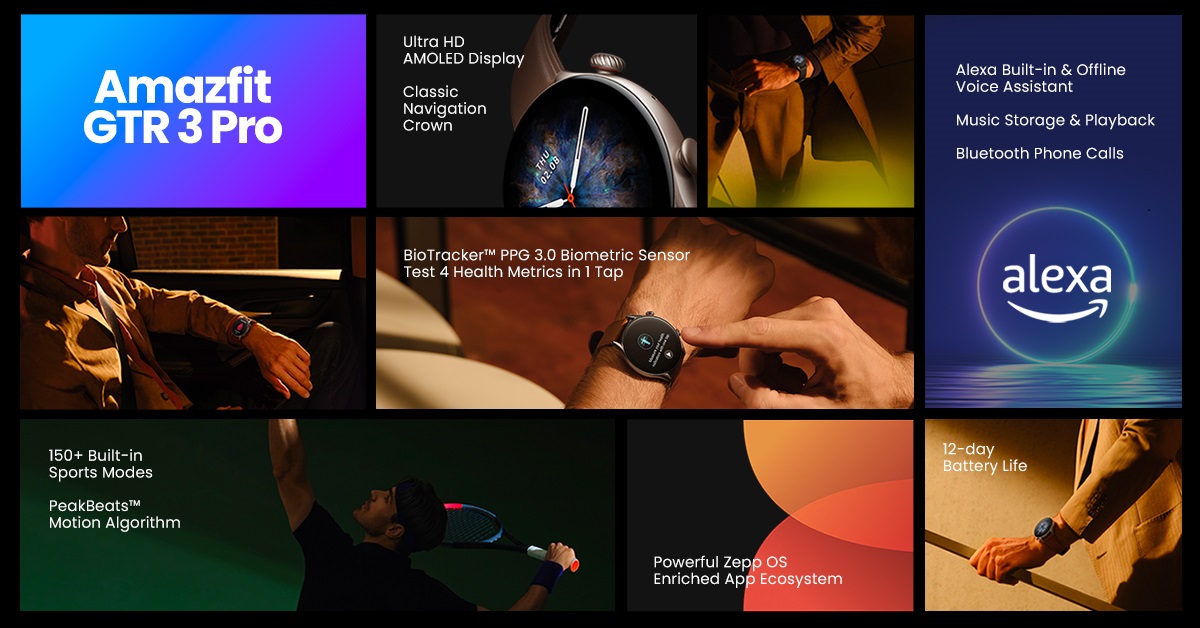 There are two buttons on the body of the watch, the upper one of which is actually the crown. Thanks to it, you can scroll through the menu and also easier to read longer notifications. More than 150 dials are available, and each has its own Always-On screen. Some dials can also be adjusted, respectively. you can choose the elements to display (heart rate, steps, etc.).

The new generation of watches also comes with an improved ZeppOS operating system. And while it's still not at the WearOS level, it already supports third-party applications. For example, the Home Connect application, which allows you to control various smart home products. The manufacturer is also preparing a tool for creating your own dials or even applications, along with a detailed procedure.

Sync with Google Fit and support for Amazon Alexa

The watch can synchronize monitored health data with Apple Health and Google Fit applications. There will also be support for popular applications such as Diet, Relive, RunKeeper, etc. (Some of the applications will not be available immediately when the watch is introduced). Amazonfit GTR 3 Pro has more than 150 sports modes. It is water resistant (5 ATM certification), so it can swim and can even monitor heart rate underwater.

It offers satellite positioning for the model based on five different inputs. This reduces positioning time by 20% and also increases its accuracy by up to 40%. There is VO2 Max monitoring, but also evaluation of your pace in comparison with previous exercises, regeneration time, etc. GTR 3 Pro they will also offer 24-hour heart rate monitoring as well as SpO2 blood oxygen monitoring.

This model is the only one of the three to offer an integrated microphone and speaker. This allows you to make phone calls via the watch or enter orders via Amazon's intelligent assistant Alexa, which is also part of the equipment. Offline assistant commands are also available in English, German and Spanish.

Although the watch itself lacks an internet connection (they rely on a connected smartphone), 2,3 GB of internal storage is available. This is used to store music or podcasts, which you can then listen to, for example, while running.

In standard use, the manufacturer declares endurance at the level of 12 days. Excessive load, for example during frequent phone calls, will in turn reduce endurance by half. The watch lasts 35 hours with a continuous GPS connection, the battery saving mode then extends the life up to a month.

Model Amazfit GTR 3 shares the aluminum design of the more expensive Pro model, but offers a slightly smaller display with a diagonal of 1,39 ″. It has a similar fineness for a sharp image and also offers a brightness of up to 1 rivets. However, the slightly thicker frames around the display indicate that the screen to front of the watch body is 000%. 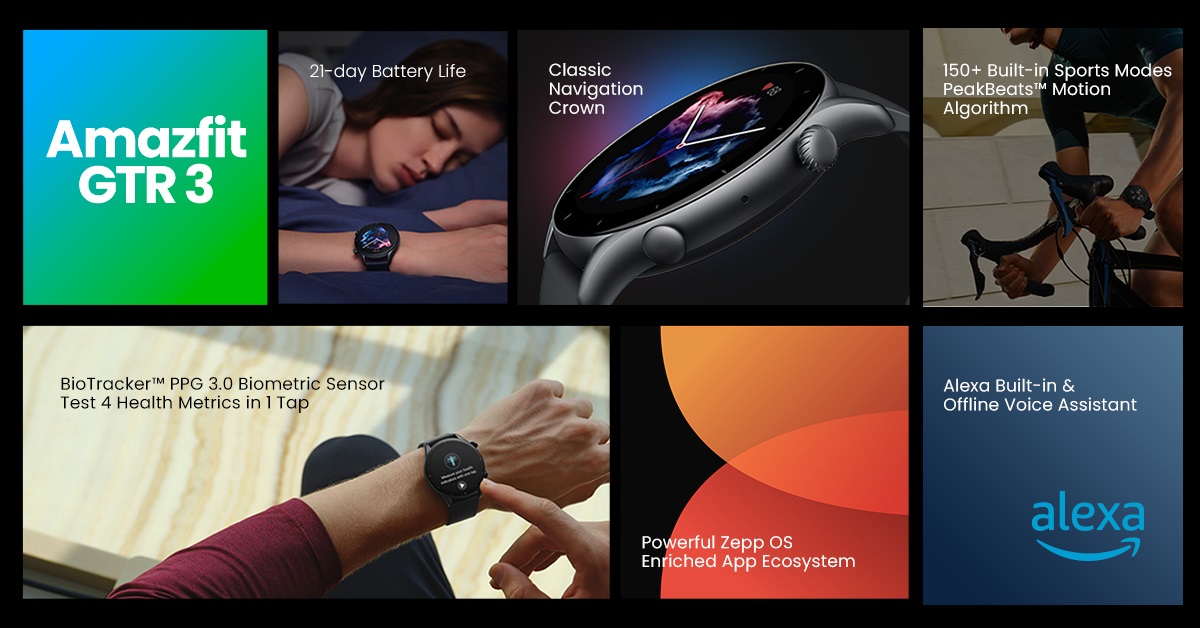 The watch will go on sale in Thunder Black and Moonlight Gray, both with silicone straps. There will be more than 100 dials to choose from to customize the look of the watch, all with a version for Always-On mode.

GTR 3 however, it is not just a cheaper version of the model Banco Pro. It has better battery life, which is up to 21 days of standard use (that's a week more than GTR 2) or 10 days of heavy use. Battery saving mode extends battery life to 35 days. The watch also has integrated GPS technology, with its continuous use the battery lasts 35 hours.

The GTS series offers a rectangular construction. You will appreciate its benefit when reading longer warnings, as well as in third-party applications. Even in this case, the manufacturer enlarged the screen, compared to its predecessor, from 1,65 ″ to 1,75 ″. The fineness is 341 ppi and thanks to the thin frames, the display occupies up to 72,4% of the front wall. It has a high brightness of 1000 rivets and support for Always-On mode. 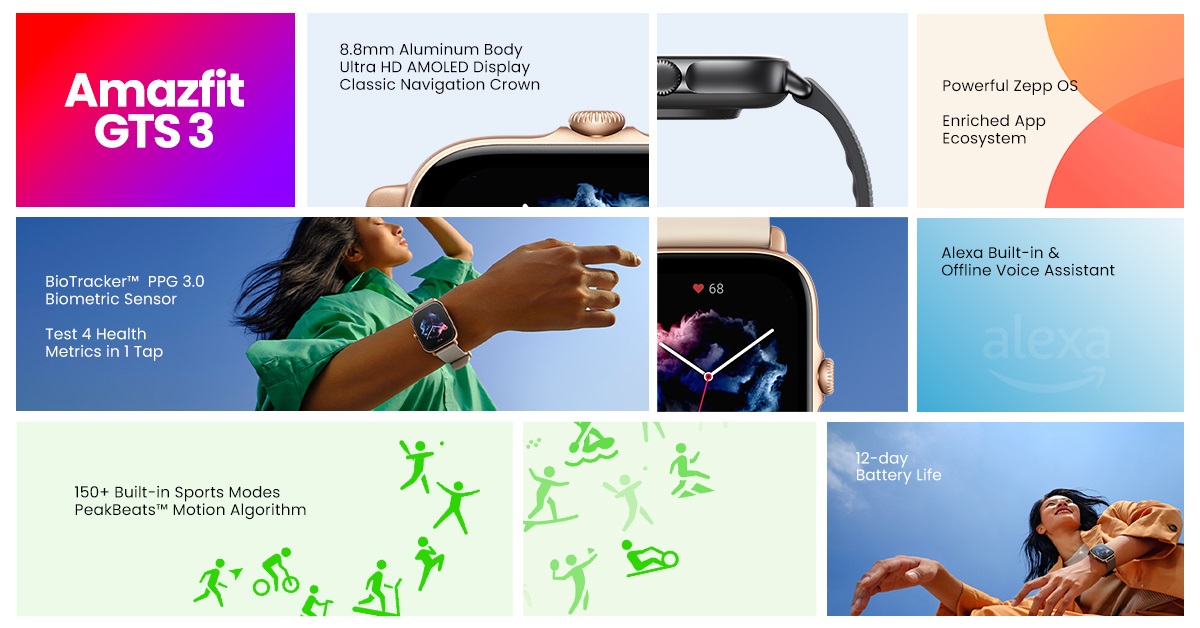 Amazonfit GTS 3 will go on sale in Graphite Black, Terra Rosa and Ivory White versions. It will please the low weight, only 24,4 grams and also the thickness, which stopped at only 8,8 millimeters. However, the battery took the tax for the thin construction. With standard use, the GTS 3 lasts 12 days. Intensive use discharges the watch in 6 days and continuous GPS in 20 hours.

Nevertheless, the resulting endurance is an improvement over its predecessor - GTS 2. He offered 7 days. A pair of models - GTR 3 and GTS 3 supports Amazon Alexa. However, it does not offer a speaker and therefore no telephone call function. It also doesn't have internal storage for your music or podcasts.

Three new watches - Amazfit GTS 3, GTR 3 a GTR 3 Pro is now officially launched in the US, UK, Italy, Spain, France and China. However, availability in other countries is also planned.

Do you like the new smart watch from the Amazfit workshop? If you have any questions about these new products, you can write to us below, in the discussion below the article. Follow our group on Facebook: Xiaomi Planet - A place for real Xiaomi fans and also our portal XiaomiPlanets.com and you will learn more information.