Quality construction with a premium feel

Night photos have no details

Plastic edges of the device

Some may lack NFC

Xiaomi has also had its Redmi smartphone series available for several years. These are pieces with a very interesting price / performance ratio. And it was the smartphones in this series that were so successful that the manufacturer decided to set them aside under a separate subsidiary brand of the same name, Redmi.

Model Redmi Note 7 is the most popular of the new series, as evidenced by the 20 million units sold in less than 8 months of sales. Although it is not a complete novelty, we nevertheless tested it in detail in the just-beginning review.

We bought it here

Contents of the package

The smartphone arrives in a relatively design-clear white box with delicate orange elements and the device inscription. The back of the package traditionally offers basic technical specifications. We don't have to blame the packaging for anything on the outside, but the truth is that the bright red box of previous generations definitely hit the eyes more. 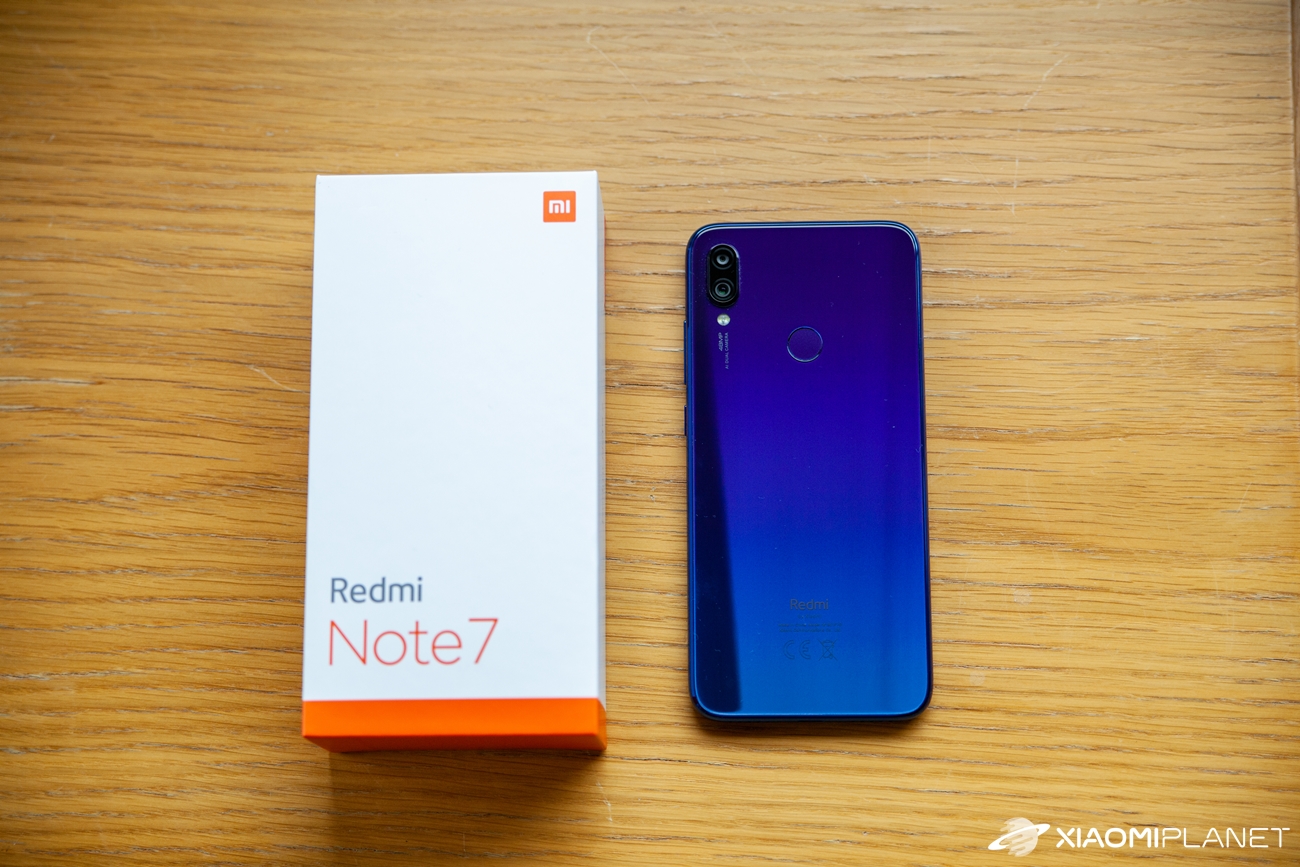 After unpacking, there is first a paper folder on the top. It contains a simple clear silicone case (dark and "smoky" when the device is black), a paper manual or a needle for pulling out the SIM card slot. Below this folder is the main one, the smartphone itself in a protective foil. 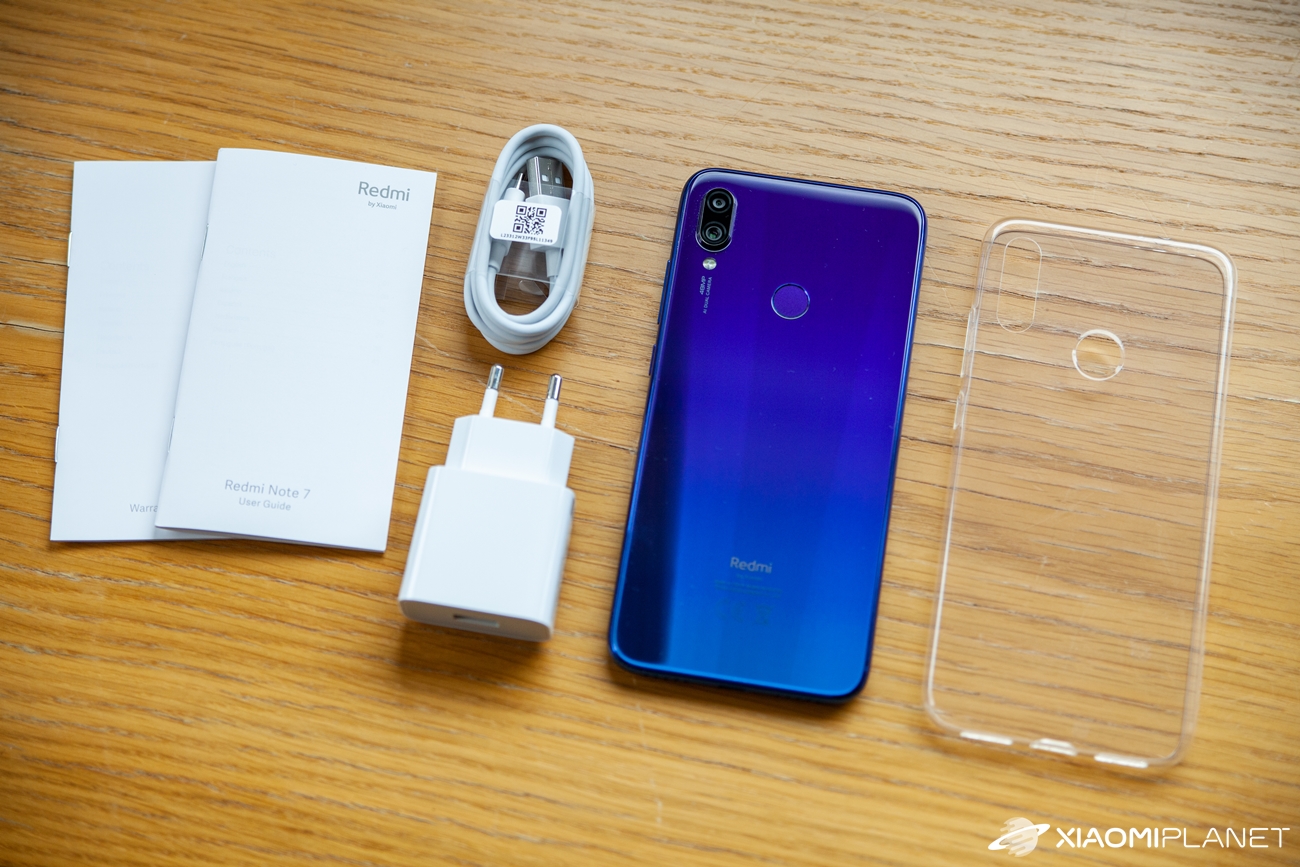 Beneath the smartphone is a USB Type-C charging cable, which has a traditional USB type A terminal at the other end. The European package also includes our standard charging terminal with a power of 5V / 2A. However, it is not a quick charger, it must be purchased separately. The smartphone supports fast charging.

The feeling of a flagship

At first glance, we can definitely confirm that the device looks more expensive than its real price. With its dimensions of 159,2 x 75,2 x 8,1 mm, it offers a straight to above-standard 6,3-inch display panel with minimal frames and a fine cut-out in the display for the needs of the front camera (yes, the "chin" is still there).

The processing of the smartphone is exemplary, nothing cracks on the body and Redmi therefore deserves praise for this model. 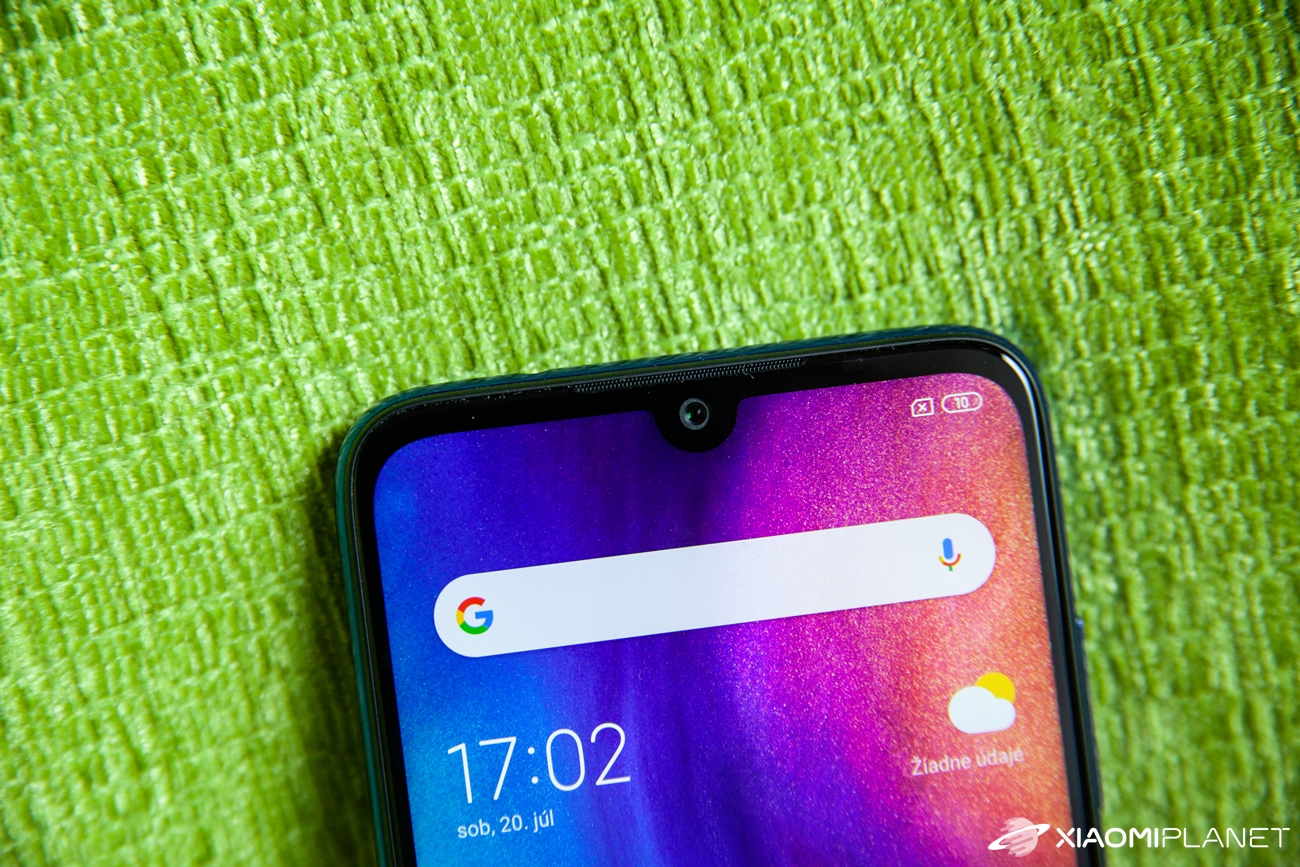 If we take into account the relatively large capacity of the battery, the weight at the level of 186 grams is fine. The thickness of the device exceeds eight millimeters, but previous generations had a similar value. The rear camera protrudes from the body of the smartphone by an extra millimeter. If you want to prevent damage, we recommend using a protective cover. 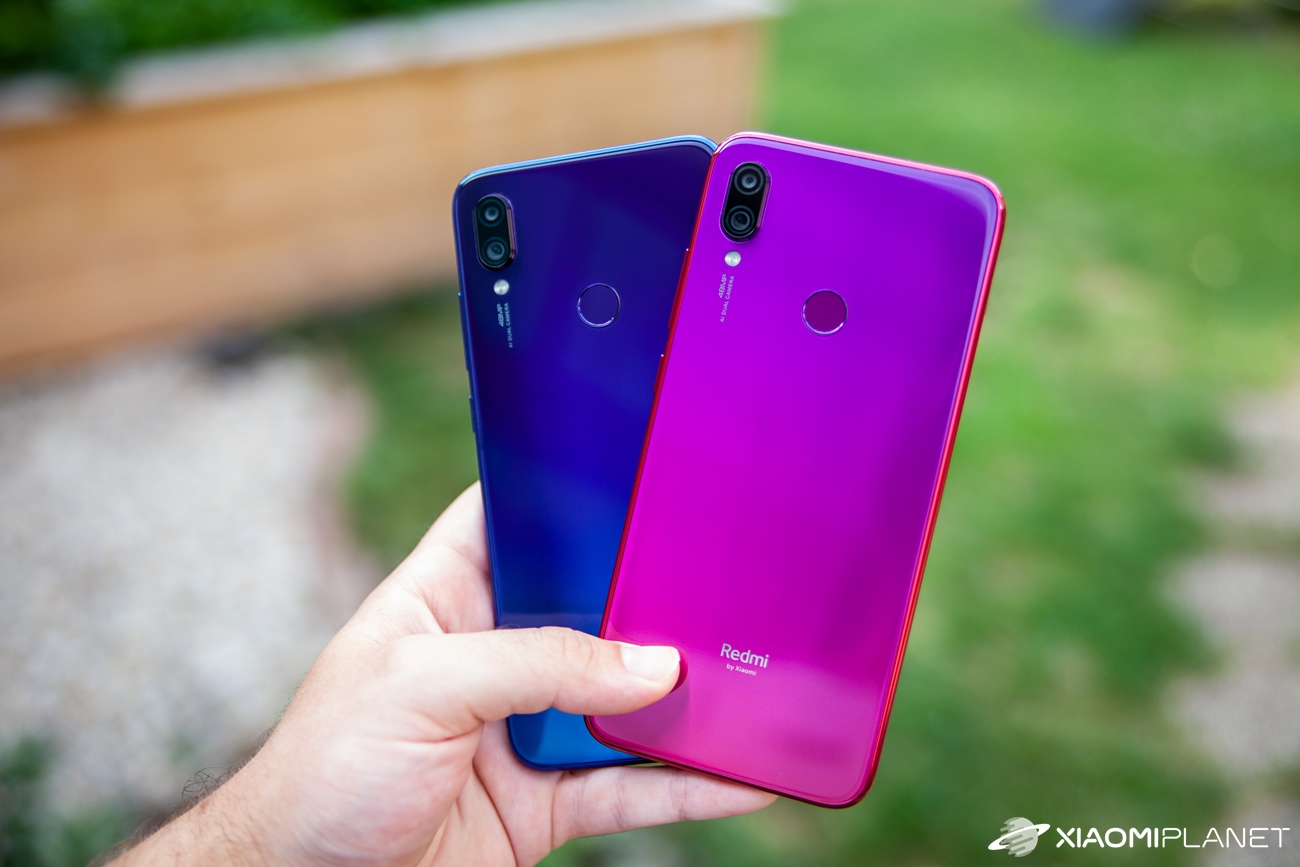 The front wall contains the mentioned large IPS panel, with a cut-out for the front camera, there is also a speaker, the necessary sensors and a notification LED diode. However, its location is unconventional, at the bottom of the device in an imaginary "chin". The upper edge contains a secondary microphone, an infrared sensor for controlling household appliances, as well as a classic 3,5 mm audio connector.

The bottom edge is home to a USB Type-C connector designed for charging or connecting to a computer, there is also a loud speaker and also a primary microphone. The design gently points to the stereo system, unfortunately, the speaker is only mono. The left side is practically empty, it only contains a slot for a pair of SIM cards or a memory card (up to 256 GB). The slot is a hybrid.

Although the smartphone has a metal frame inside, it is plastic on the outside. However, the rear wall is made of tempered glass, and even this acquires the aforementioned more valuable feeling from the device. There is a pair of rear cameras, a flash, a standard fingerprint reader (conveniently located), and the words "Redmi by Xiaomi" along with other necessary information.

The 6,3 ″ display panel is of the IPS type and offers a total resolution of 2340 x 1080 pixels (ie Full HD +). Below the display is a slightly thicker chin, which has no special use. However, it contains an LED for notifications. However, given the price of the device, this is a relatively understandable compromise. 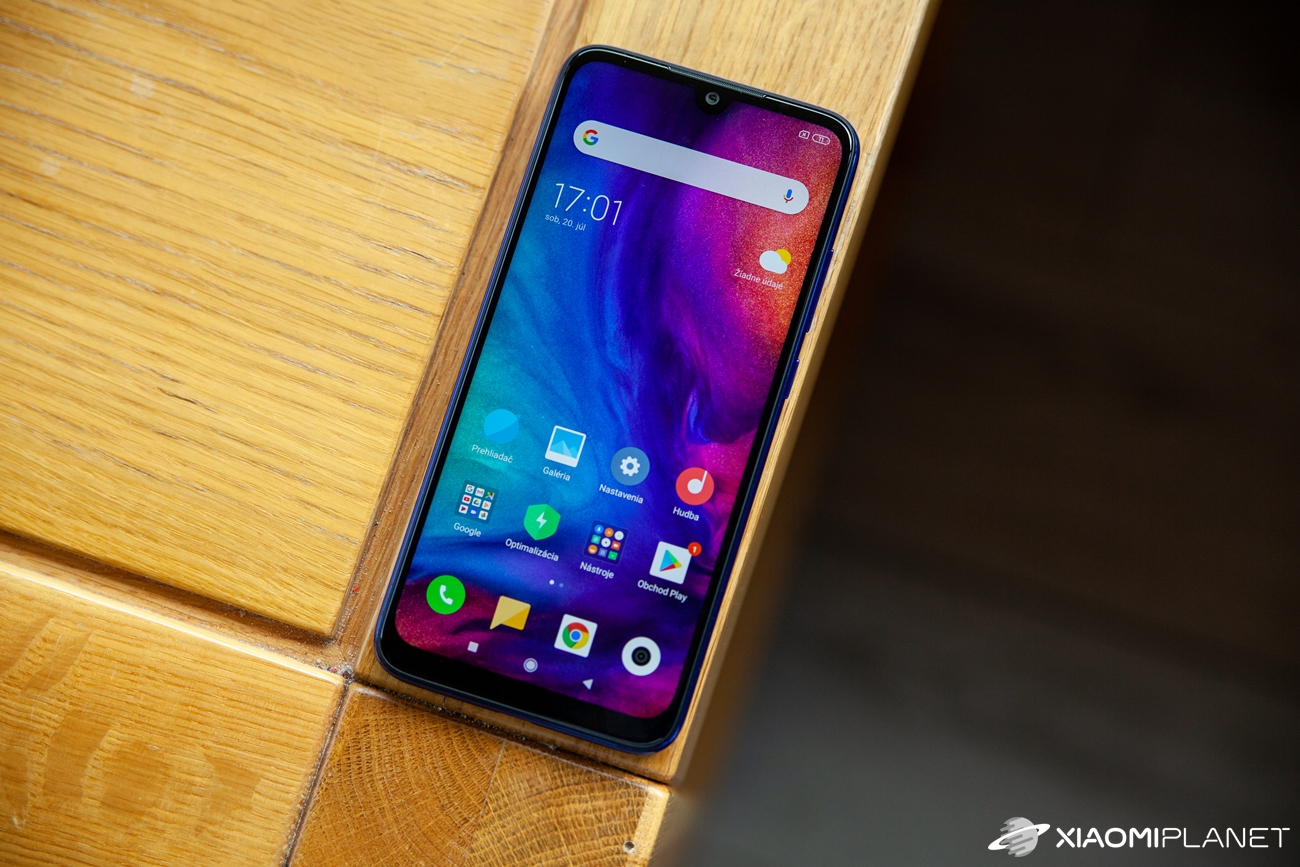 The display as such is not bad, although it does not have the quality of flag panels, but it has good viewing angles and quite natural and true colors. In addition, these can be corrected in the settings. Good for that price, but a higher overall brightness would come together. In direct sunlight, this is currently a bit insufficient. Otherwise satisfaction.

Performance is enough for everything

The device is powered by either 3/4 GB RAM (depending on the memory version of the device), an eight-core mid-class Qualcomm Snapdragon 660 processor and also the Adreno 512 graphics chip. Although it is last year's chipset, it still offers very good performance. The results of the AnTuTu benchmark test are available in the gallery below.

Stability with the system itself was not a problem and the processor will suffice for simpler 3D games. Especially in game mode, which Xiaomi connects by software. So we didn't see any major performance issues, but the newer 665 or 710 series processor would definitely show something more about the smartphone.

In terms of memory versions, the cheapest version offers a combination of 3 GB RAM + 32 GB internal storage. This is a standard basis, especially for the most demanding users or for users who are relatively active in the use of cloud storage. In addition, the storage can be hybridly expanded with a microSD memory card up to 256 GB.

The smartphone contains a practical and basic fingerprint reader, which found its place on the back wall, in the middle under the camera lenses. Its location is very good and can be easily reached by both left-handers and right-handers. With smaller hands, you will encounter the problem of the overall size of the device rather than the location of the reader. 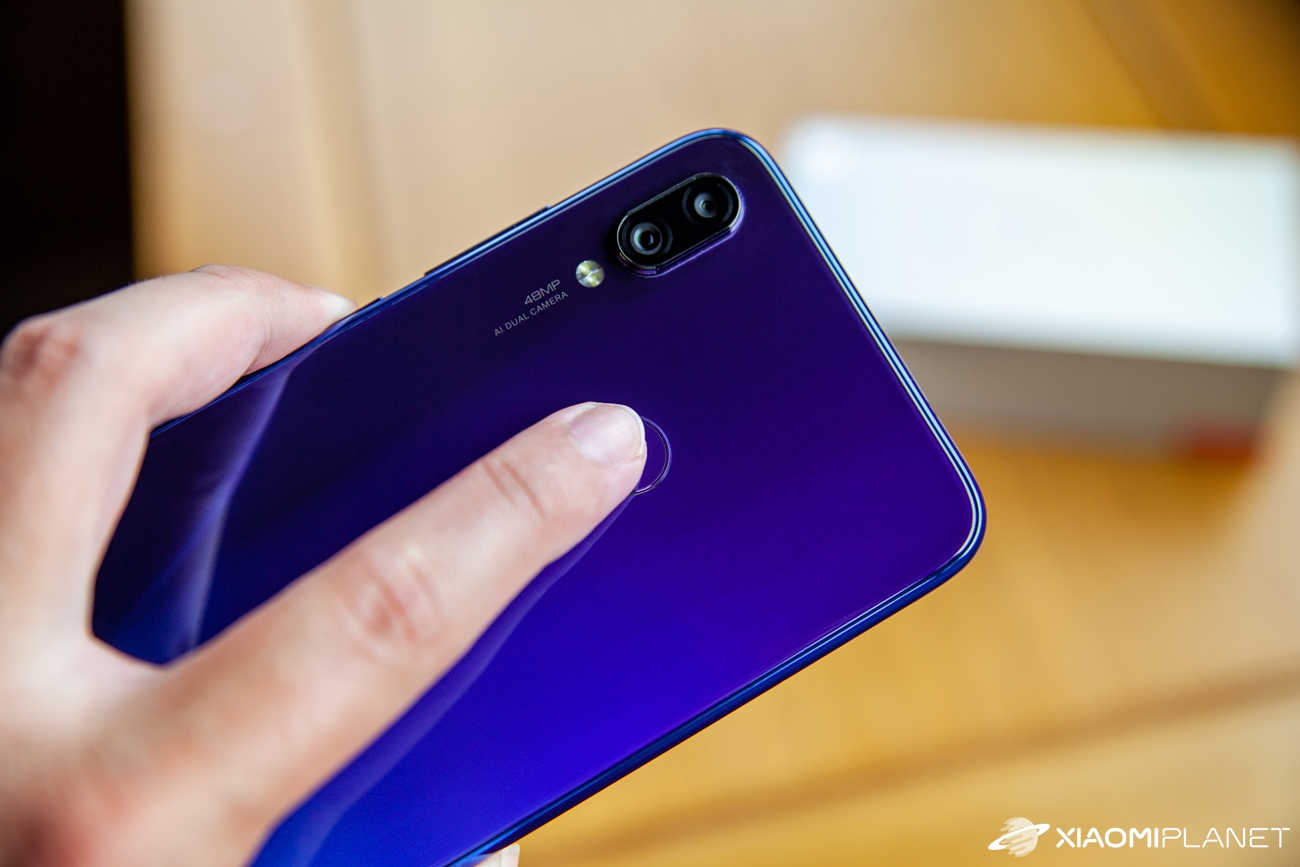 In any case, the responses of the used sensor are reliable, the manufacturer has equipped his sensor with suitably optimized appropriate software. Sure, we also have faster and more stylish fingerprint readers, but in this case it was built on simplicity and practicality. Managed to.

Currently, the Redmi Note 7 smartphone is also distributed to our market with the latest Android 9.0 Pie operating system. This is, of course, improved by the graphically massive MIUI superstructure, which we will talk about more in the next chapter of this review.

The smartphone is not bad at all, even in terms of security. Despite the massive superstructure, the support is very good and our piece had the last security update as of 05.07.2019. So far, the only August update is missing.

The mentioned superstructure from the manufacturer is present in the MIUI Stable version 10.3.5. It is practically a very current version, which also offers a dark mode of the UI itself, improved emoji or integrated system sounds.

The environment as such is familiar to Xiaomi users. It is well tuned due to the chipset used. There are applications distributed on home screens or a wide degree of customization through settings. The built-in applications for calendar and clock or file manager also work flawlessly.

The photographic equipment of the Redmi Note 7 is very good, it can be said that it is above average in the given price. There is a pair of sensors on the back. The main one offers 48 MPx and a brightness of f / 1.8, and the second, secondary, 5 MPx with a brightness of f / 2.2.

The purpose of the secondary sensor is mainly to blur the background for the bokeh effect and also helps in poor lighting conditions. 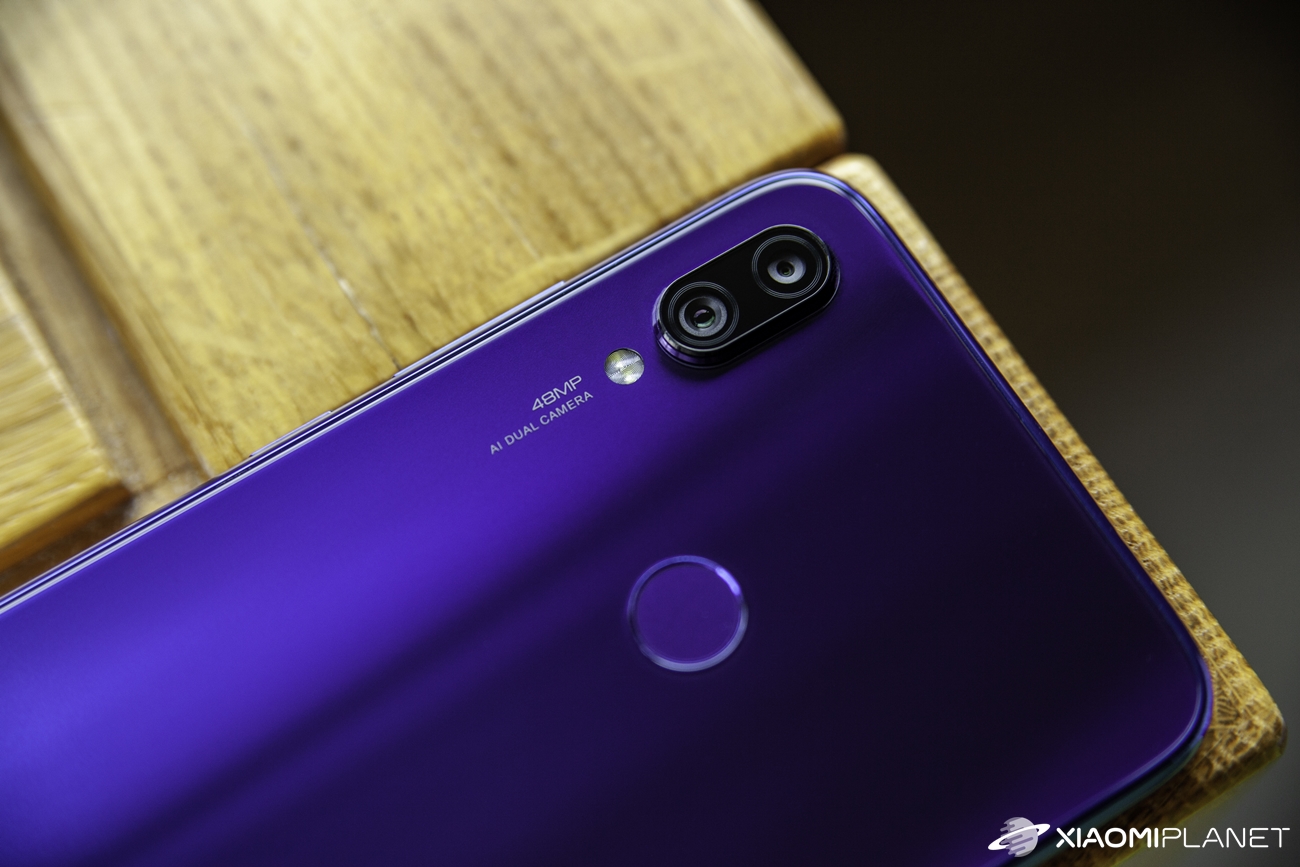 There is a dual LED flash on the back, or functionalities such as HDR or panorama. Video can be shot with the rear camera in 1080p resolution, at 30/60 or 120 fps, depending on the specific mode.

The front camera is one, located in the cutout in the display and offers a resolution of 13 MPx with f / 2.0 brightness and HDR. With this front sensor, it is possible to record 1080p video at 30 fps.

The quality of the photos is generally not bad at all. However, the attentive eye will not miss the occasional slight loss of detail, even with daytime and AI modes turned off. The colors are realistic, and the contrast or stability when shooting is fine. As standard, the sensor takes 12 MPx images, the full 48 MPx is available only in a separate mode "PRO," where this resolution still needs to be turned on.

Slightly freezes the poorer quality of night photos, resp. photographs taken in poor lighting conditions. Whether night or standard mode, photos lack sharpness and detail. Despite the shortcomings, the smartphone also defends its price in terms of photography.

In the gallery below, we bring you a preview of photos with daylight, photos taken in poor lighting conditions, full-fledged 48 MPx photos, but also macro photos. Sample photos in the gallery are scaled down for review. The original in full resolution is available in the following link.

NFC is missing, audio jack is not

In terms of connectivity, the smartphone offers virtually standard equipment that does not deviate from the equipment of competing devices. Vice versa Redmi Note 7 it loses a bit, as there is no NFC chip usable here, for example, for contactless payments. It is therefore not possible to pay with this telephone in a brick-and-mortar store. 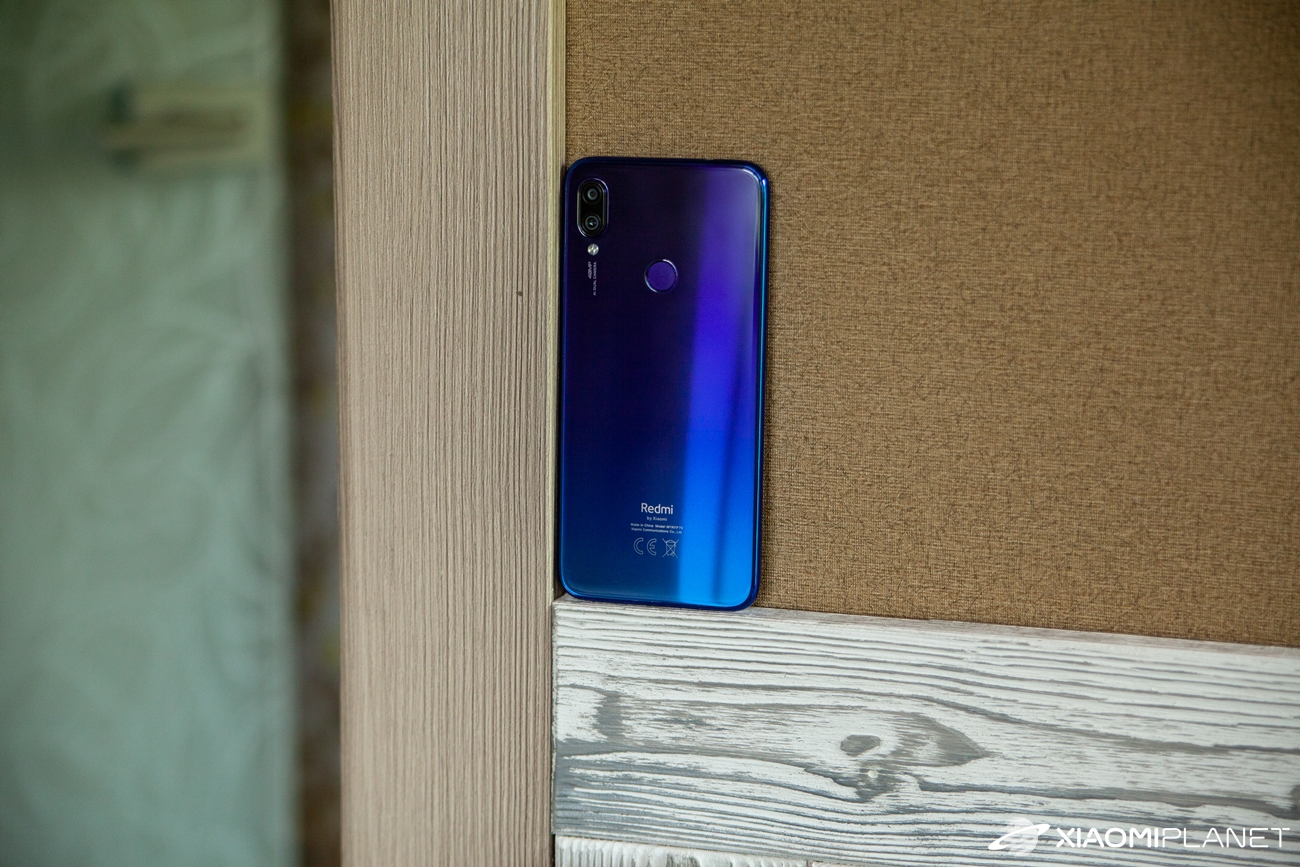 Surprise the ever-present FM radio with recording support and the infrared sensor for home electronics control. The sensor itself is complemented by a built-in application Mi Remote.

The Redmi Note smartphone series has been known for its high battery capacity for several generations. A few years ago, when the Redmi Note 3 version came into our hands, the 4100 mAh battery was above standard. Now upgraded Redmi Note 7 continues the established trend and brings a battery with a capacity of 4000 mAh. 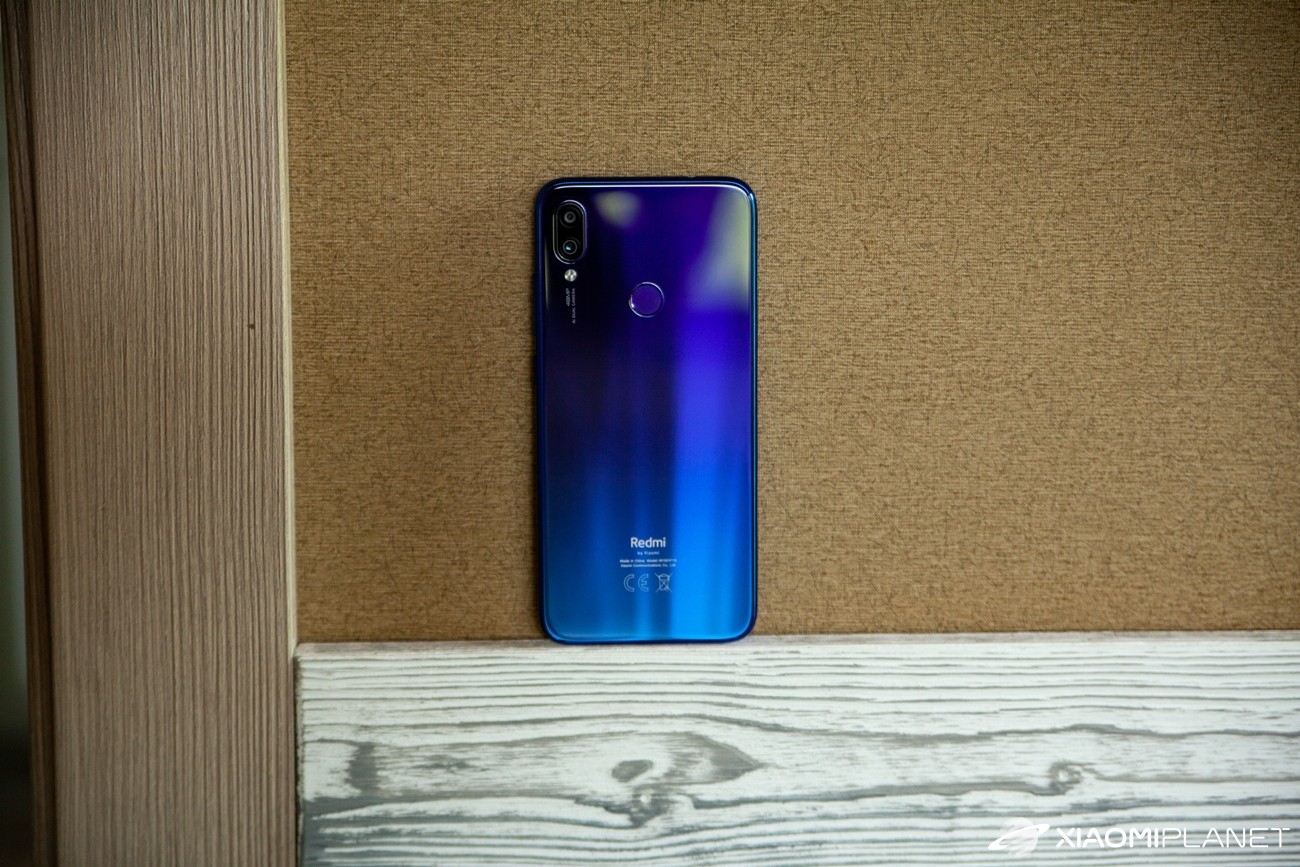 Software optimization is exemplary, although it sometimes closes applications in the background a little earlier than would be good. However, the phone will pay off with the endurance at the level of 1,5 - 2 days per charge with the screen switched on at the level of 8 - 10 hours.

With a truly demanding work day and a strong display brightness, the phone can handle a full day and even save a percentage in the evening. The manufacturer definitely deserves praise for its capacity and battery life.

As for the question: "To buy or not to buy?", Redmi Note 7 is a really successful device and the answer is unequivocally Buy. When it comes to buying this smartphone, it's especially the excellent price / performance ratio, quality bodywork of the device, accessories in the package, good software optimization, above-average 48 MPx camera, excellent battery and small things in addition to 3,5 mm audio connector or infrared sensor. 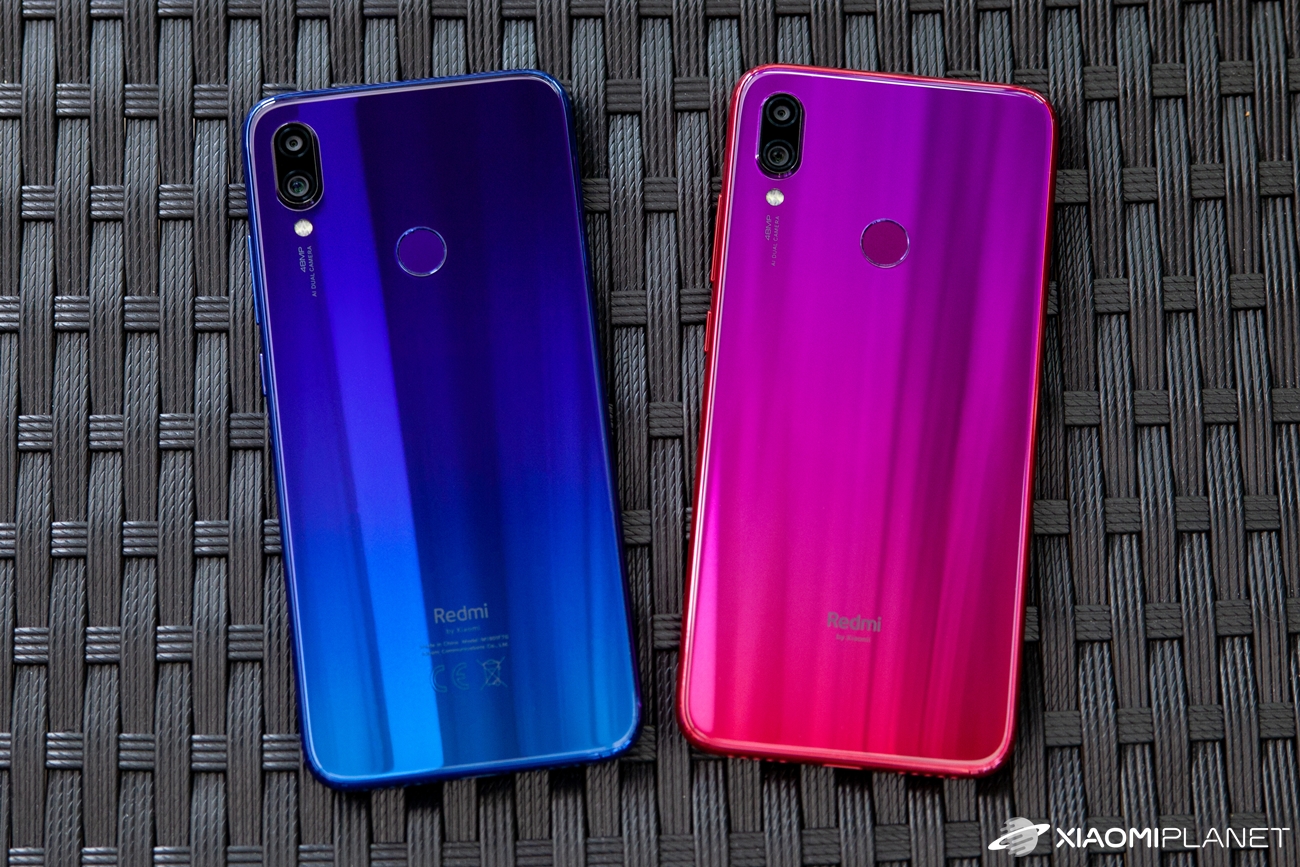 We bought it here

The balanced device will definitely find a lot of fans, especially in the target group up to 200 euros, and also for users who do not strictly require the performance of a flag model. This is a really good piece of middle class equipment.

Xiaomi Mi 9 again a little cheaper: These are the best market prices