Xiaomi Mi 9T vs Redmi Note 8 Pro: A sharp duel of the best Xiaomi smartphones up to € 250

Buying a mobile phone is often a difficult decision-making process for many users. On one side is the budget and the financial amount we are willing to spend. On the other hand, there are several dozen different smartphones that are too similar to each other.

How do you just choose the right one to get the most for my money? See our following comparison.

In today's article, we looked at two representatives of the upper middle class. We compared Xiaomi Mi 9T a Notes redmi 8 Pro. Both phones belong to roughly the same category of middle-class smartphones.

The price on the compared models is attractive. Although it is hard to believe, both phones can be purchased for less than € 250, approximately CZK 6. For this amount, you get quality (not equipment) worthy of a flagship. But which one to choose?

Comparison of basic specifications in the table: 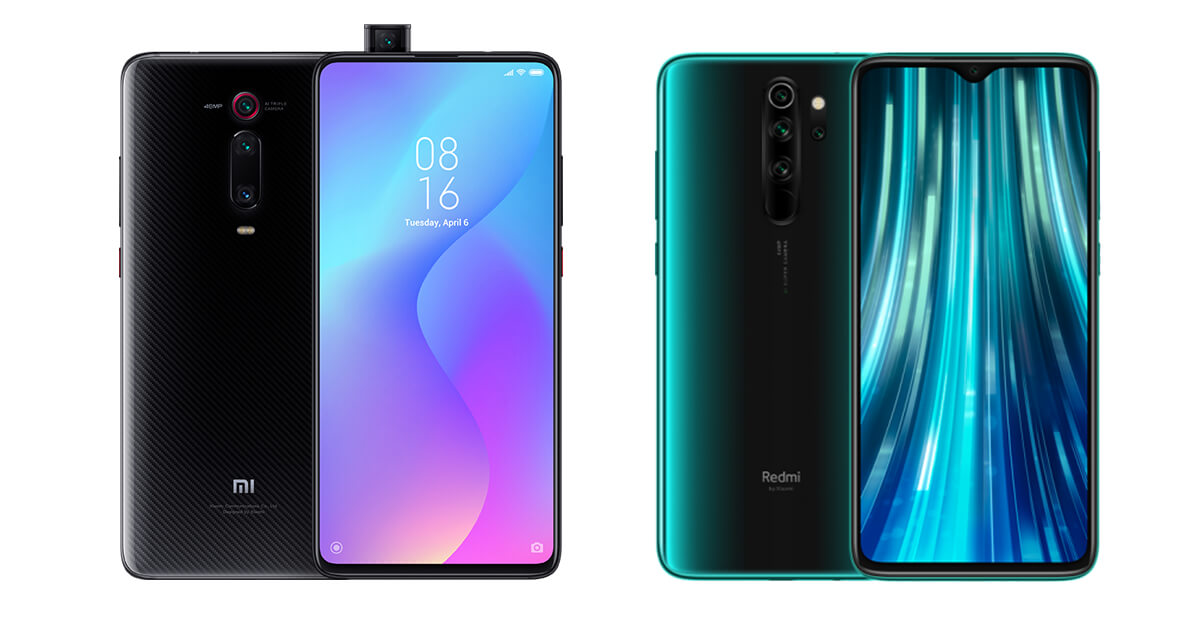 The specifications are already clear to us, but let's discuss some parameters in more detail.

You will have to rely on yourself in this category. Both phones are almost the same in size and weight. Note 8 Pro is still a bit larger and heavier. The difference in the size of the phone and the display is most noticeable when both mobile phones are next to each other. Note 8 Pro seems subjectively lighter for larger dimensions. 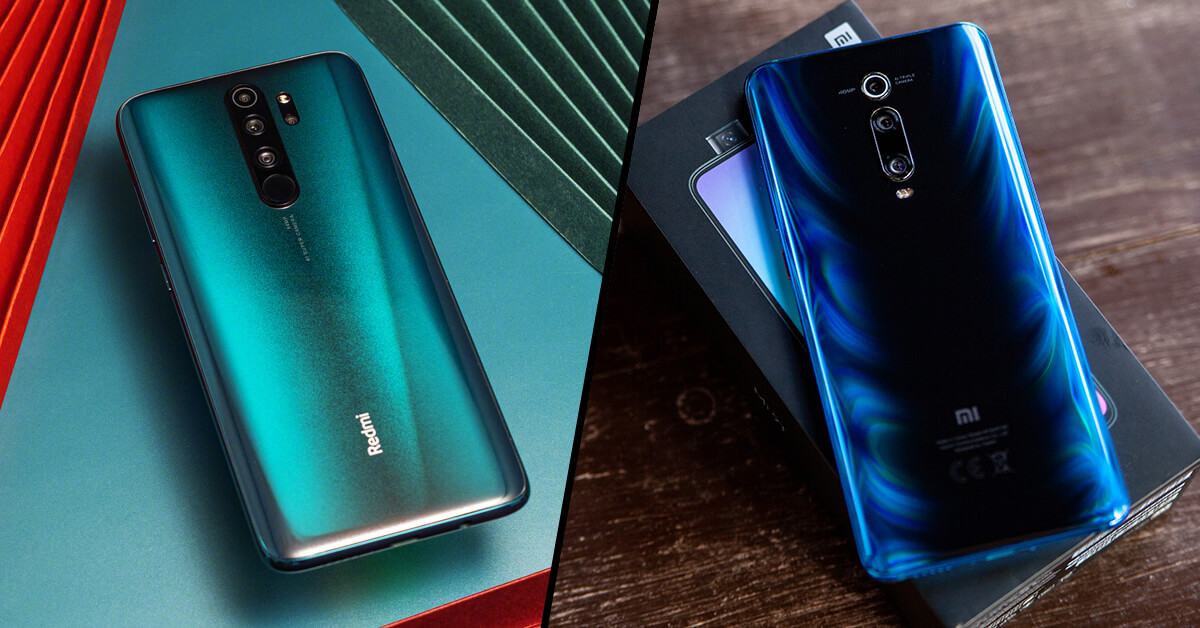 We will also include the durability of both smartphones in this category. In both cases, the display is protected by Gorilla Glass 5. Interestingly, Note 8 Pro has a protective coating. P2i Nano and its resilience is certified in the IP52 standard.

This means resistance only to splashing water or rain. The Mi 9T does not have such a certificate, but recently video from the bowels of the Redmi K20 Pro, elements of a certain protection against water have been discovered.

Here we will allow ourselves not to qualify the winner and we will leave the decision to individual taste.

The phones being compared got completely different displays. As you learned from the table, the Mi 9T is a 6,39-inch Super AMOLED with Full HD + resolution. It has an integrated 7th generation fingerprint reader and no cutout for the front camera. In addition, AMOLED technology enables the function of ambiguous display of various data on the display when the device is "asleep". 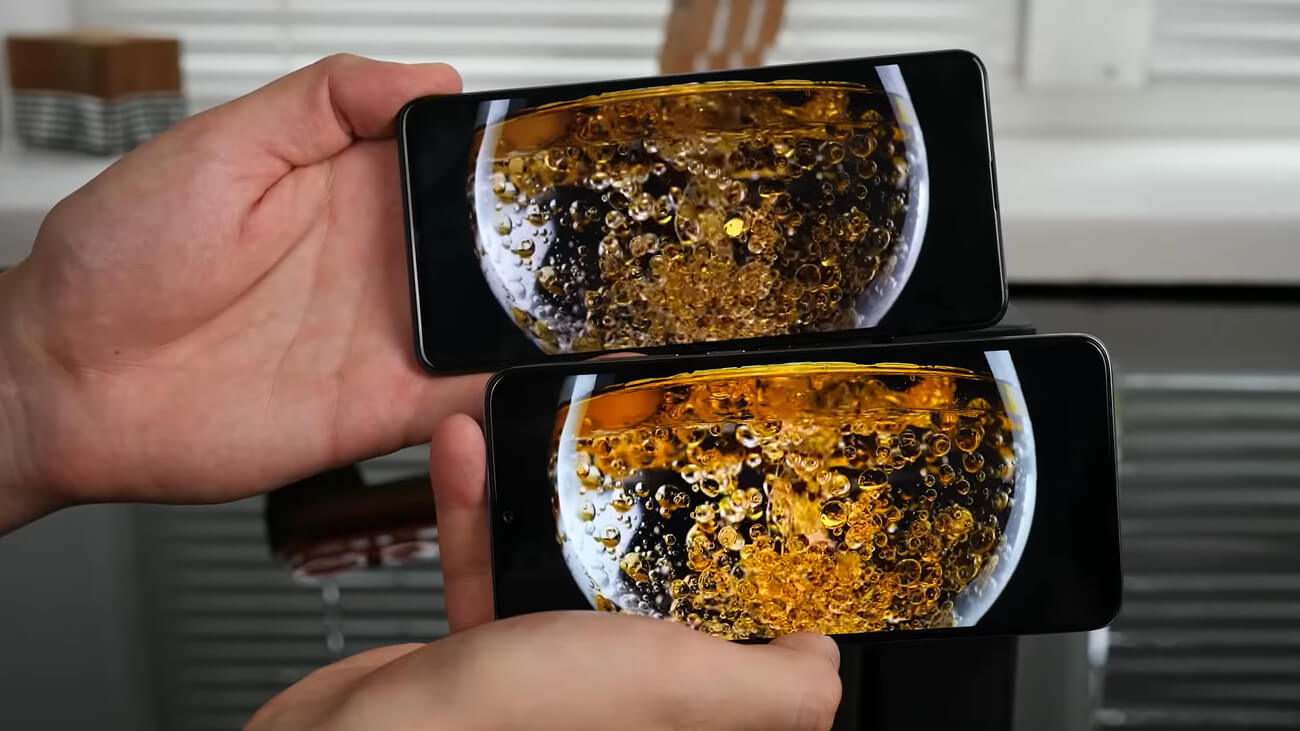 Redmi Note 8 Pro is a bit "worse" with the display. Although the display diagonal is 0,14 inches (0,35 cm) longer and the resolution is the same, it is just LTPS LCD technology. The color display is not as contrasting as AMOLED.

In addition, in its upper part there is a cutout for the front camera, which takes away from the space of the notification panel. In this case, an ambiguous display is not possible. 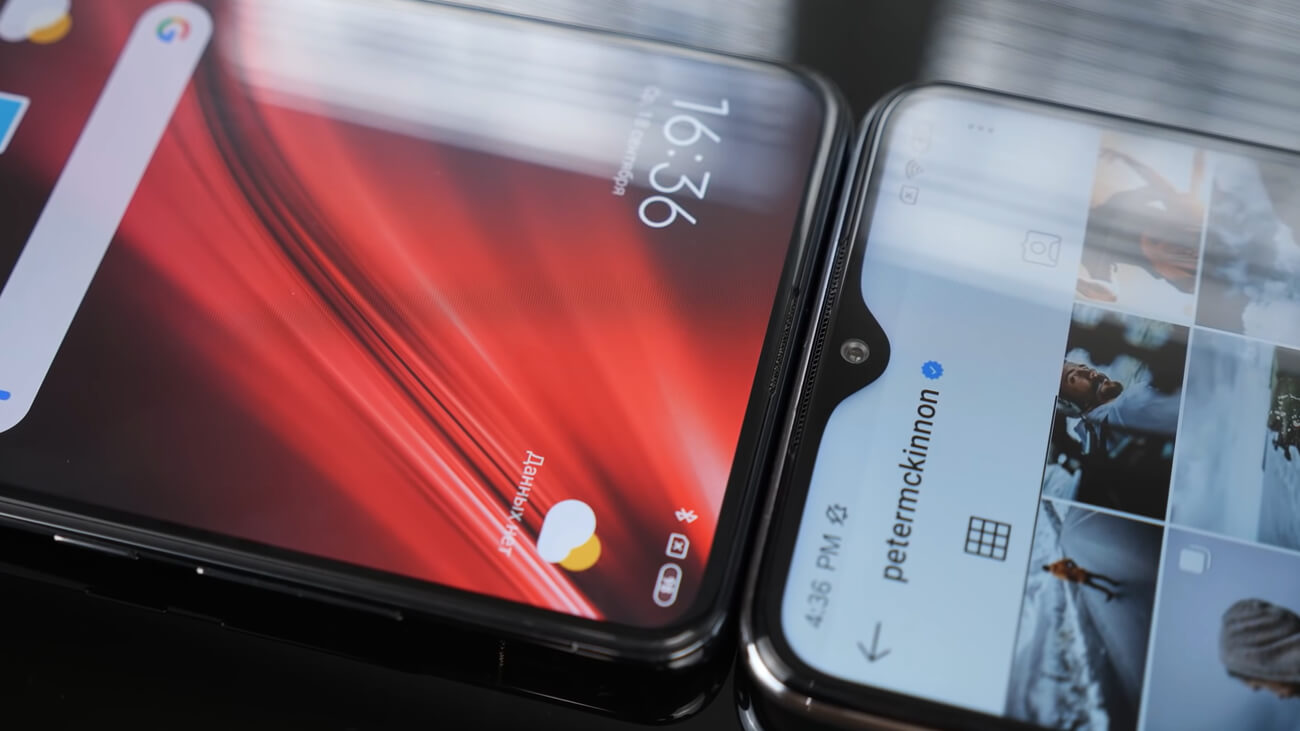 The Redmi Note 8 Pro has a fingerprint reader located on the rear panel and not below the display. However, we do not take this into account as a minus, because such a placement suits many users.

Nevertheless, the clear winner is the Mi 9T. Super AMOLED panel without cutouts simply has no competition.

In Redmi, after several failures with Mediatek, they again relied on the brand's processor. With the new Helio G90T, they went into risk because this type had not yet been used in any device. The Redmi Note 8 Pro is the first smartphone with this chip ever.

Helio G90T is referred to as gaming and is also indicated by the integrated liquid cooling. This will help especially for more demanding data operations, where it should reduce the temperature by 4 to 6 degrees Celsius. 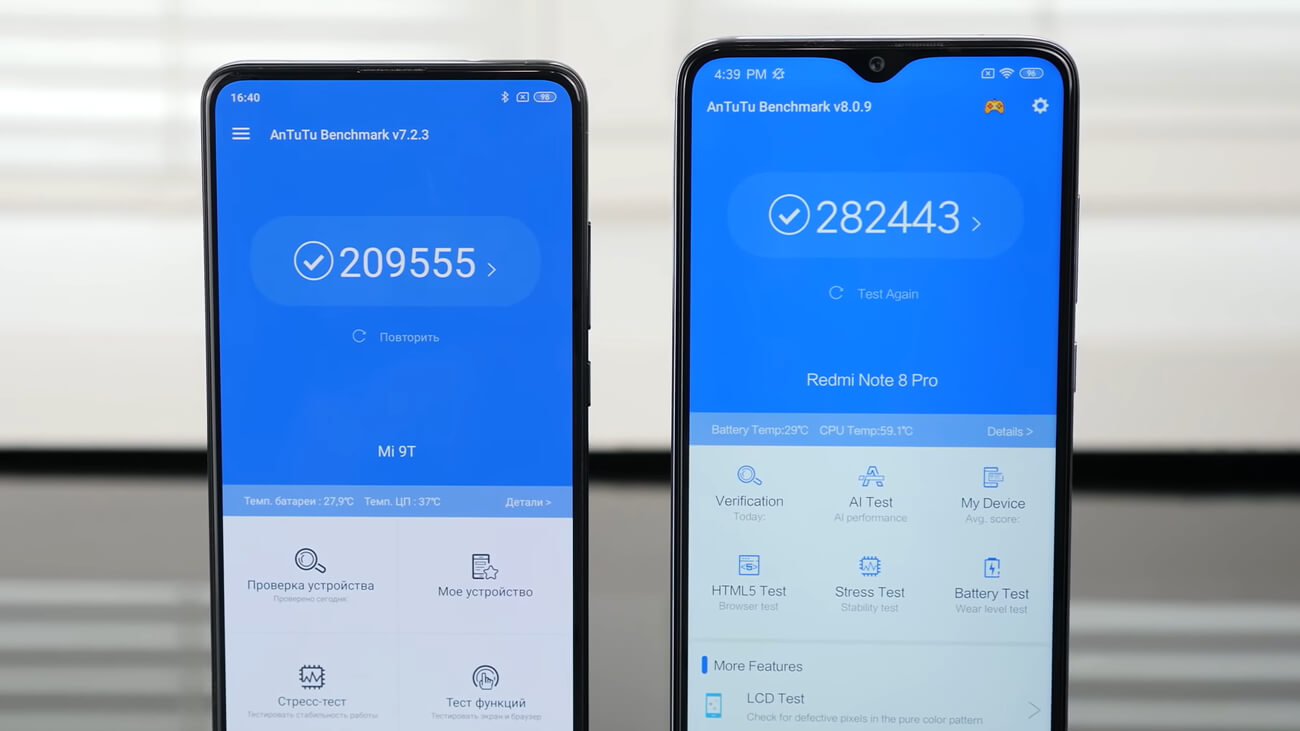 Redmi Note 8 Pro is clearly better when comparing the performance of both phones in measuring the AnTuTu score. He scored up to 282 points, which is a clear difference from the Mi 000T with 9 points.

However, it has been confirmed many times that such score testing may not reflect reality, for example when playing games. Both phones use software optimization to play Game Turbo 2.0 games. Both run on Android 9 Pie with MIUI 10 extension and an update to MIUI 11 and Android 10 is planned.

With normal use of a mobile phone, you should not feel any differences in performance. However, even when playing more challenging games, Redmi Note 8 Pro does not seem to have a significant top. Their real performance is at a very similar level.

Here we got into a mess. Redmi Note 8 Pro has the latest 64 MPx sensor Samsung GW1, but we have convinced ourselves several times that high resolution is not everything and does not automatically mean better photos. 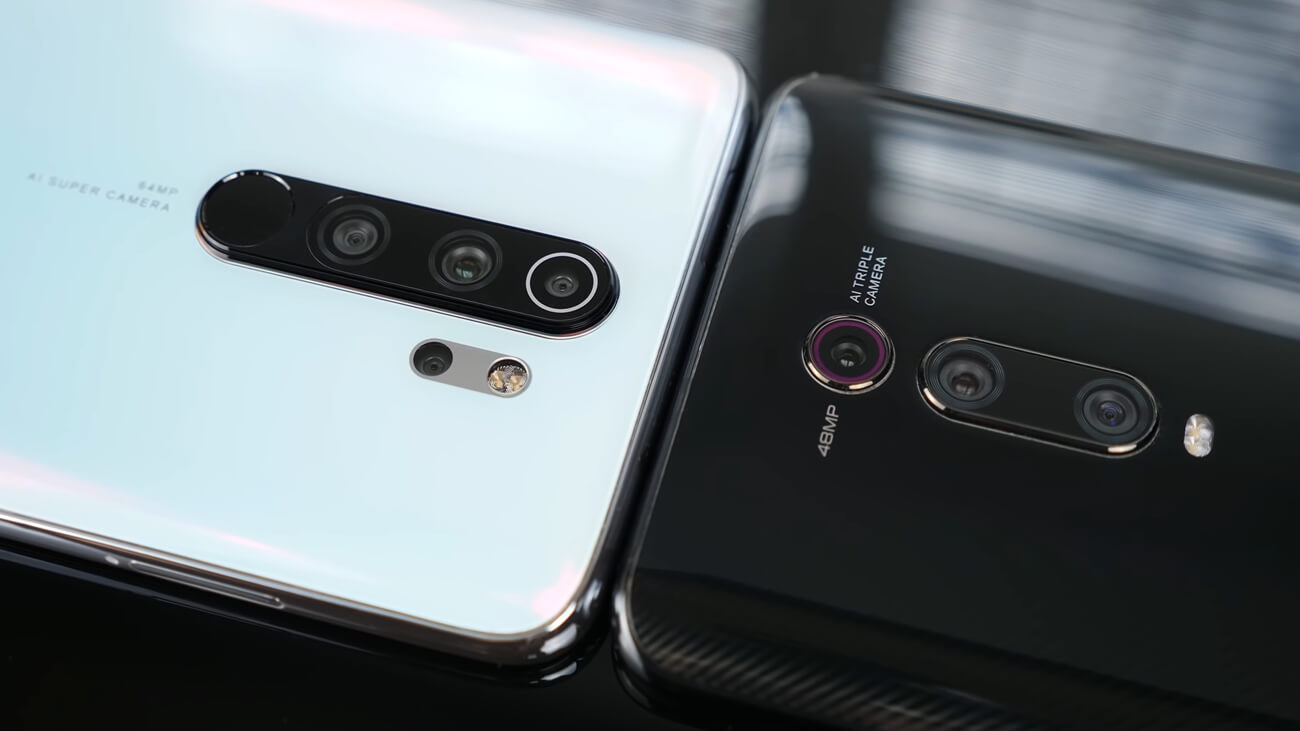 Note 8 Pro also has one extra macro camera, but its use in common situations is questionable. However, when we examine the specifications of the individual sensors and the overall configuration of the cameras, it turns out that The Mi 9T is a bit better.

The primary sensor in the Note 8 Pro has a much higher resolution and can capture more detailed details. However, we do not find a secondary telephoto lens on the Mi 9T with double optical zoom at all on Note 8 Pro at all. 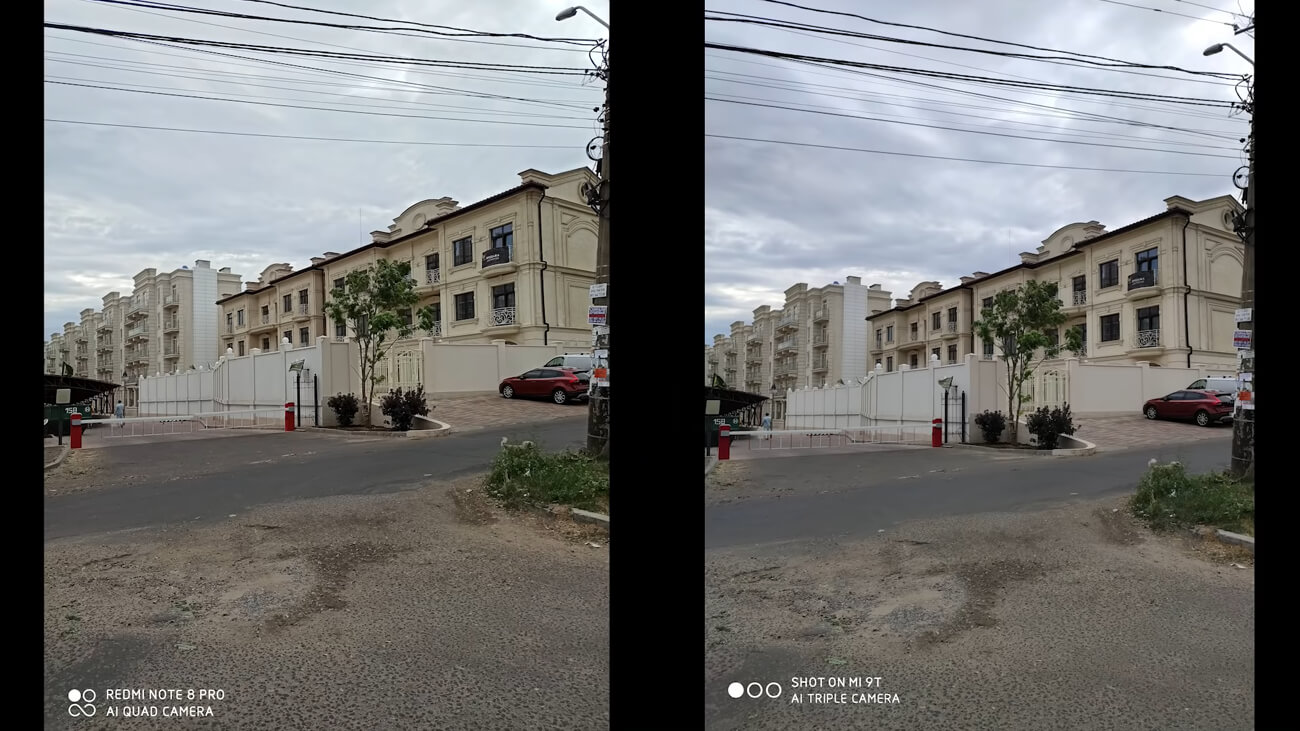 The front cameras are almost the same. The difference is in their location and we must confirm that the slide-out module in the Mi 9T has no error.

From our point of view, the winner is the Mi 9T, especially for the use of the Sony IMX582 Exmor RS sensor, a complete combination of cameras, also thanks to the retractable front camera.

At the outset, we will write that Redmi Note 8 Pro is better on paper in this category as well. Its battery has a capacity of 4500 mAh. With the Mi 9T, the battery capacity is 4000 mAh, but when tested, they reached almost the same values. 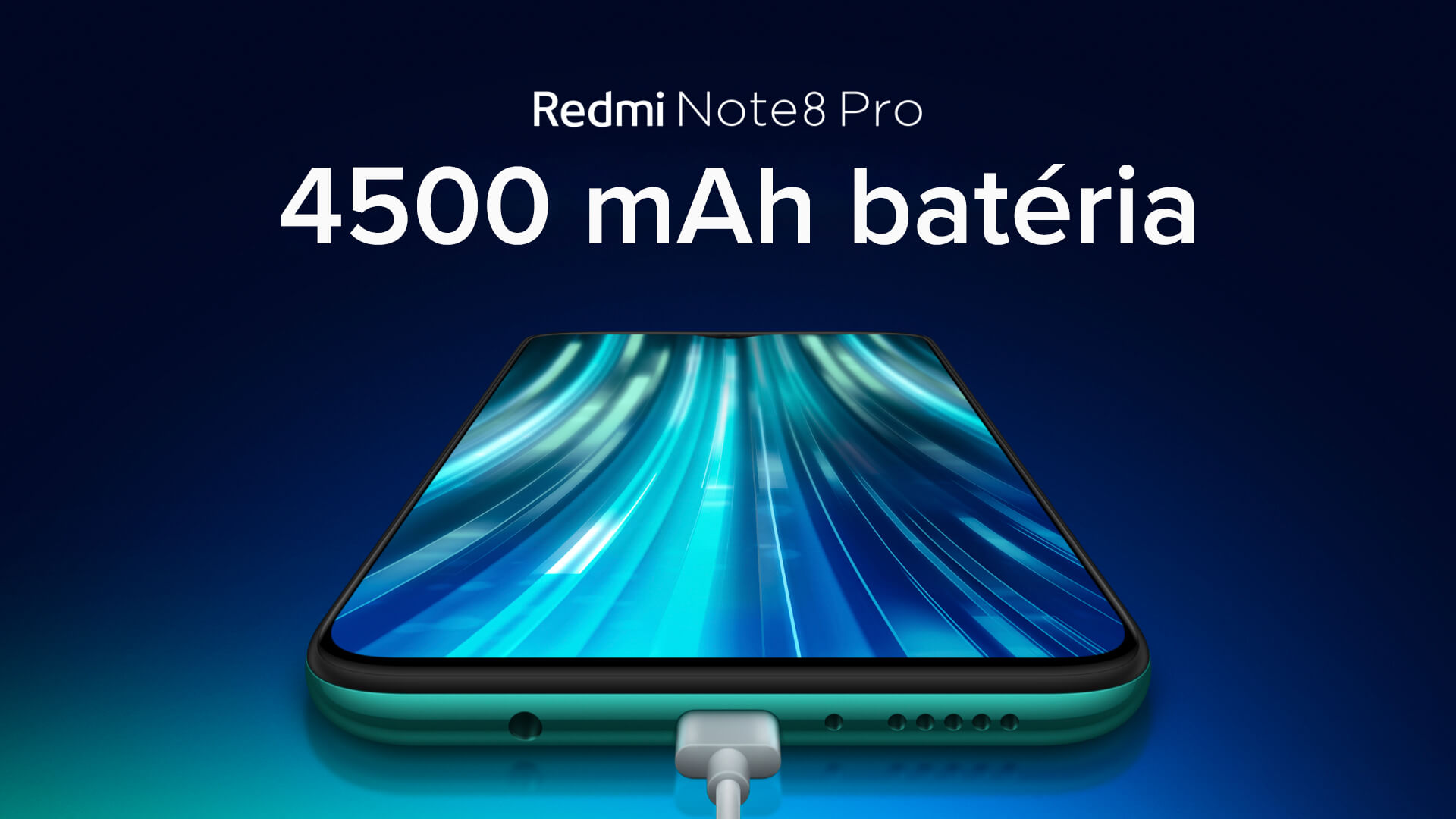 It's hard to say whether it was caused by a larger LTPS LCD display or a Mediatek processor. However, we must state that The Redmi Note 8 Pro has almost the same endurance as the Xiaomi Mi 9T on a single charge.

Both phones support 18 W fast charging and cannot be charged with wireless technology. In this category we can boldly declare a draw.

Since we mentioned in the introduction that these are phones in the category up to 250 € / 6 CZK, their prices will no longer be a surprise. Through our sister shopping site DealPlanet you can get both global versions of the compared smartphones.

Notes redmi 8 Pro with 6 GB RAM and 64 GB storage is currently available for a price 238 € / 6 CZK. Xiaomi Mi 9T with the same memory can be purchased at exactly the same price.

Our decision in conclusion

Traditionally, we will not decide for you in the end, but we will write what decided for us. Although we only compared the Xiaomi Mi 9T model, we have to state this for both twins. The Xiaomi (Redmi) brand has been so successful with the Xiaomi Mi 9T Pro and Xiaomi Mi 9T that it's hard to find phones that can beat them. The ratio of offered equipment, design and price simply did not find a competitor in 2019.

The compared opponent Redmi Note 8 Pro gave us no reason why we should choose from these two. It's not even a price tag that weighs many times over. Both phones have a lot in common and if one of them excels in something, it is the Mi 9T and therefore it is our winner.

If you were waiting for the white Xiaomi Mi 9T Pro, you can finally order. In a 128 GB version with an excellent coupon