MIUI 13 in the global version is officially introduced - Xiaomi Planet

The expected global version of the MIUI 13 superstructure is officially introduced! Optimization in the main role

Just a few minutes ago, new smartphones from the series were introduced at the official global Xiaomi conference Redmi Note 11 together with the global version of the superstructure MIUI 13. In this article, we will describe the most significant improvements over the current version of MIUI 12.5 Enhanced Edition.

MIUI 13 comes with a number of interesting news. The main emphasis this time was on optimizing processes and applications running in the background for faster response and a smoother environment.

Higher storage efficiency thanks to the "Liqiud Storage" function

Liqiud Storage, or literally translated "Liquid Storage", is one of four new fundamental changes in the operation of the MIUI system. This algorithm will offer better and more efficient defragmentation of files stored on your smartphone. 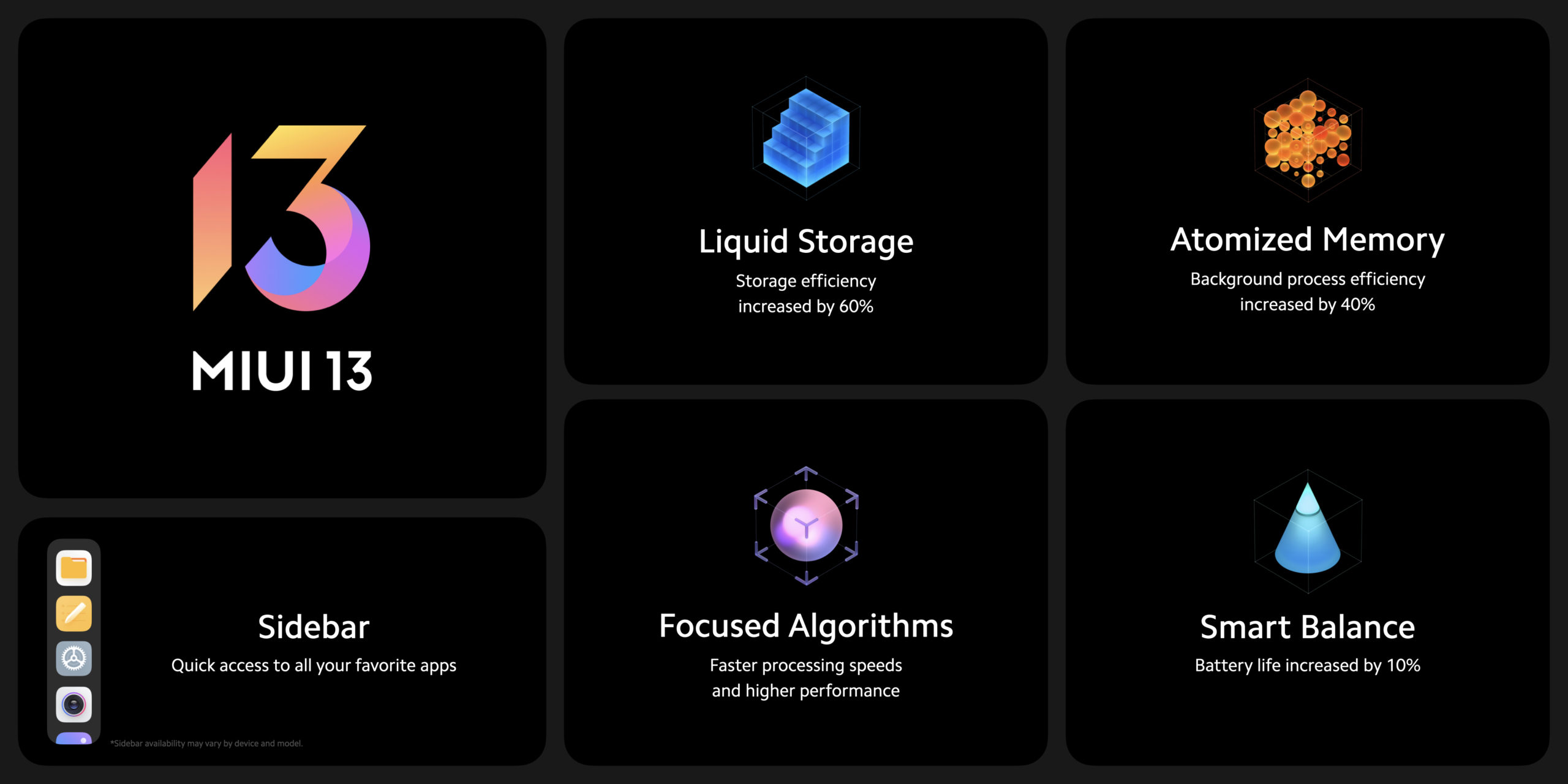 According to the MIUI development team, writing and reading speeds will be reduced by up to 36% after a year and a half, ie 50 months of use. With the new "Liqiud Storage", the write and read speeds should be reduced compared to the original speed as soon as the smartphone is first switched on by 5%.

The second major innovation is the algorithm designed to optimize RAM usage. "Atomized Memory"As the original name of the new algorithm puts it, it optimizes the use of RAM by applications running in the background, which will make the system run much smoother.

Use RAM by background processes will be reduced by up to 40% globally, which will make much more information in your temporary memory. This feature will be especially appreciated by owners of middle and lower class smartphones with less RAM capacity.

The developers of one of the most popular extensions also implemented an algorithm in their thirteenth generation called "Focused Algorithms„. In essence, these are a number of smaller algorithms whose primary task is to properly prioritize currently used applications.

MIUI 13 will try to further optimize the current running process before those in the background. Thanks to this innovation, the response of the system will be much higher and the user experience will also increase as a result.

The latest new algorithm is the one called "Smart balance“(Smart Balancing). As the name suggests, the new algorithm will take care of finding the optimal ratio between power and energy consumption.

Since the algorithms listed above primarily focus on speeding up response and increasing performance, it was necessary to optimize battery usage at the same time. With the new algorithm, battery consumption will improve on average by up to 10 %.

Introducing Sidebar - a new feature that lets you access all your favorite apps with just a swipe. This is perfect for the multitaskers that want an easier way to pull up multiple apps at once, or quickly swap between them. #MIUI13 pic.twitter.com/SP6XyohZ0O

The latest news that Xiaomi mentioned at her conference is the new "Sidebar". The sidebar gives you quick and convenient access to other applications without having to close the currently used application. However, the sidebar will only be available on selected models.

Finally, the Chinese giant did not forget to mention the preliminary plan to release the update. In the first quarter of 2022, MIUI 13 in the global version will reach the devices listed below:

A more extensive list of donated devices will definitely be published in the future, but we will have to wait a few more weeks for that.

Together, Xiaomi presented quite a few innovations to our taste, but the truth is that optimization is an inseparable element of a high user experience, which will probably be exemplary in MIUI 13. As they usually say, less is sometimes more.

In the discussion under this article, you can write to us about how you perceive the new generation of the MIUI superstructure and whether you like the new improvements. We like to read your opinion on the matter.

We will continue to monitor the whole situation closely and then publish all the news on our Xiaomi Planet technology portal. If you don't want to miss anything important not only from the world of smartphones, join our group on Facebook and subscribe to interesting articles directly to your inbox.

Xiaomi Populele 2 is a great smart ukulele with an application through which you will learn to play. It has a record price in the CZ warehouse