MIUI 14 officially confirmed! This is the new logo and we know the launch date

MIUI 14 officially confirmed! This is the new logo and we know when it will be unveiled

Our favorite Chinese manufacturer Xiaomi is preparing its upcoming version of the graphics superstructure MIUI. It will offer a label MIUI 14, its preparations have been officially confirmed and we already know the logo and the date of the official show.

MIUI 14: This is what the graphics superstructure logo will look like

We regularly receive new leaks from the world of Xiaomi. However, Xiaomi is not just a product manufacturer. It is also a software developer, such as the MIUI graphics superstructure. Practically the first venture of this company since its foundation, it will see its fourteenth generation under the name MIUI 14. 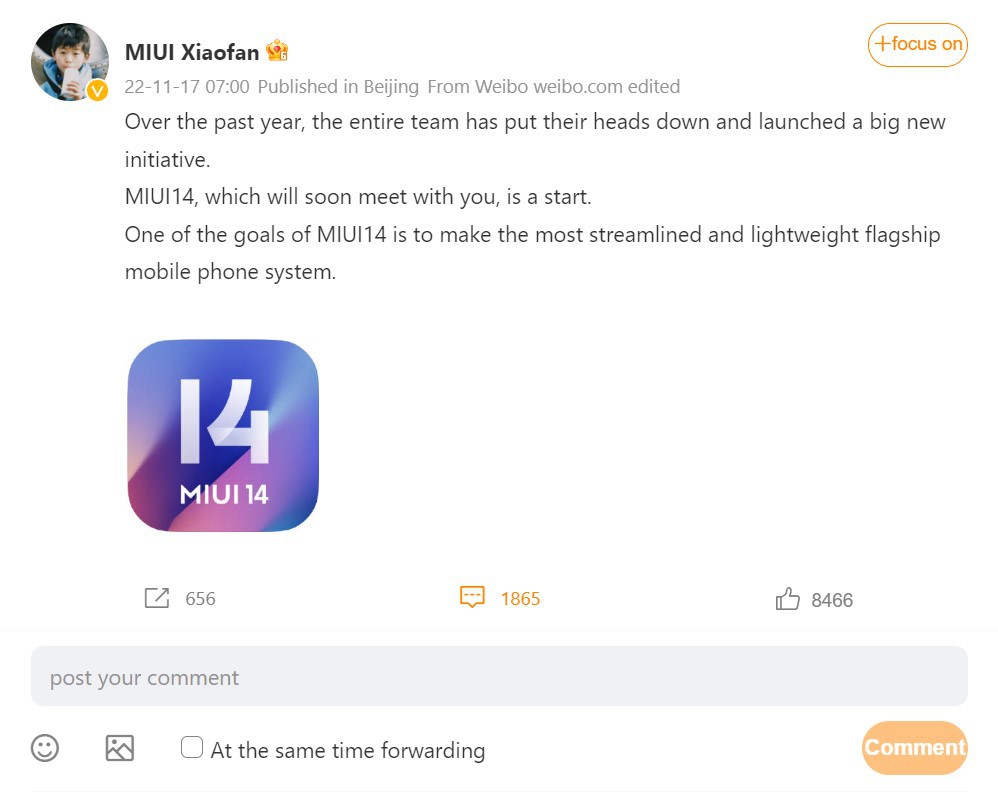 The preparation of this superstructure has already been confirmed by Xiaomi product director a general manager of MIUI, Jin Fan, which has already revealed the commercial logo. The new version should be launched in China this month.

And flagship smartphones Xiaomi 13 and Xiaomi 13 Pro will be the first devices with optimization for MIUI 14, based on the Android 13 operating system. It promises great improvements in the field of optimization, design and even performance.

The goal is the fastest build for Android

As revealed by Jin Fan, on the social network Weibo, Xiaomi is trying to create the lightest and fastest superstructure based on the Android operating system. And that's exactly what the version should represent MIUI 14.

Some rumors suggest that the entire interface will really be redesigned, but in addition to that, annoying advertising should also disappear preinstalled bloatware.

As for the logo you can find in the image above, we don't yet know any other details that would reveal to us regarding the upcoming version. It is true that it is a somewhat more transparent and minimalistic design. These two elements are the key from which we can also derive functional improvements from Android.

However, we have to wait a few more days or weeks for more detailed information. As usual, the Chinese version will arrive first with the series Xiaomi 13. However, if you are waiting for the global version, it should appear in early 2023, on selected devices.

How do you like the upcoming graphics superstructure from Xiaomi's workshop? If you have any other questions about MIUI 14, you can write them to us below, in the discussion below the article. Follow our group on Facebook: Xiaomi Planet - A place for real Xiaomi fans as well as our portal Xiaomi Planet and find out more.

Qualcomm officially introduced the most powerful processor for Android smartphones for 2023. The flagship model Xiaomi 13 will also receive it

Updated: Will the Xiaomi 13 finally be unveiled as the Xiaomi 14? New photos of the package and a screenshot from the system indicate this