Let's face it, Apple's smartphones are popular both in the home country and in China and around the world in general.

After all, it is a personal matter for everyone what brand of mobile phones one likes and then starts using products with the company's logo.

However, some may find it a little strange if the CEO of the giant Xiaomi decides to use the iPhone.

On the Weibo social network, which is intended for the Chinese population, Lei Jun was directly caught using an Apple smartphone. In addition to its status, information about the device from which the post was published was also visible on the digital platform.

CEO Xiaomi has thus experienced a really embarrassing situation, from which fans of the brand will probably be pulling on for some time.

Because Weibo shows the type of smartphone from which statuses are sent, other situations have occurred in the past. For example, they revealed a model that has not yet been officially introduced.

Unknowingly, Lei Jun spiced up his text, which was supposed to attract people to buy a few books, with the addition of "Sent from iPhone".

Many Xiaomi employees are said to love the iPhone

Another Xiaomi employee, Mr. Jiutang, subsequently defended the company's CEO with his own status. In this, he claims that Lei Jun and other colleagues use the iPhone.

It follows from his post that not using equipment from competing companies is downright uncompetitive. 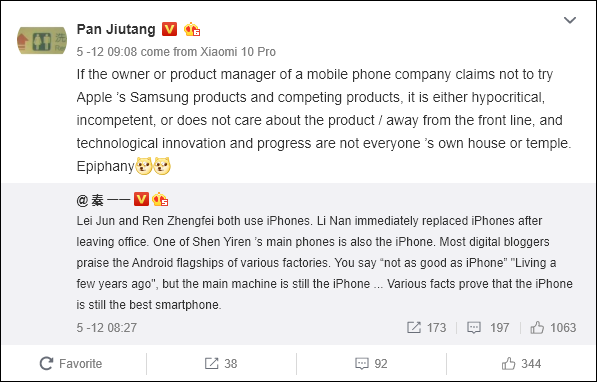 He concluded by adding that the iPhone is still one of the best smartphone models on the market. It is these sentences that probably justify the design of the new superstructure MIUI 12, which is sometimes too strikingly similar to iOS.

After Mr. Jiutang announced his status, the original message from the company's CEO disappeared from the social network. It was later replaced by a new one, but this time it came from a model Xiaomi Mi 10 Pro.

It is also worth mentioning the fact that the director of Huawei also admires the ecosystem of the brand with the logo of the gnawed apple. In the past, he was caught using the iPhone in the same way as Lei Jun, along with Realme's head.

A former Meizu employee also switched to an iPhone after leaving the company. You can easily write your opinion on this controversial situation in the comments below.

This is supposed to be the cheapest 5G smartphone on the market from Redmi. Comes with a MediaTek Dimensity 800 processor

The expected Xiaomi Mi Band 5 will come later. This was confirmed by the director of Huami, a company that makes bracelets